A Little Bit of Cabin Fever, and Our Own Version of "Chopped"

It's snowing here in Illinois, and it has been since Saturday afternoon. While I don't mind the snow (so long as I am not driving in it) cabin fever started to set in today. Henry wore his "Snow Day" shirt today in the midst of our little blizzard, and he definitely "flipped" after being cooped inside all day.


How many time outs have Greg and I supervised today? We've lost count. Henry is rather funny about his, though. Somewhat like the criminals one sees being arrested on television, he always covers his face, ashamed to admit to his crimes, no matter the eyewitness accounts and unmistakable evidence.

This was the view out our screen door (glass door, now). The snowdrifts are several feet high in places, and people have been trying to leave and/or return to the subdivision with little luck because the drifts are on our street. We're on a cul-de-sac, so plowing our street is at the lowest priority level. 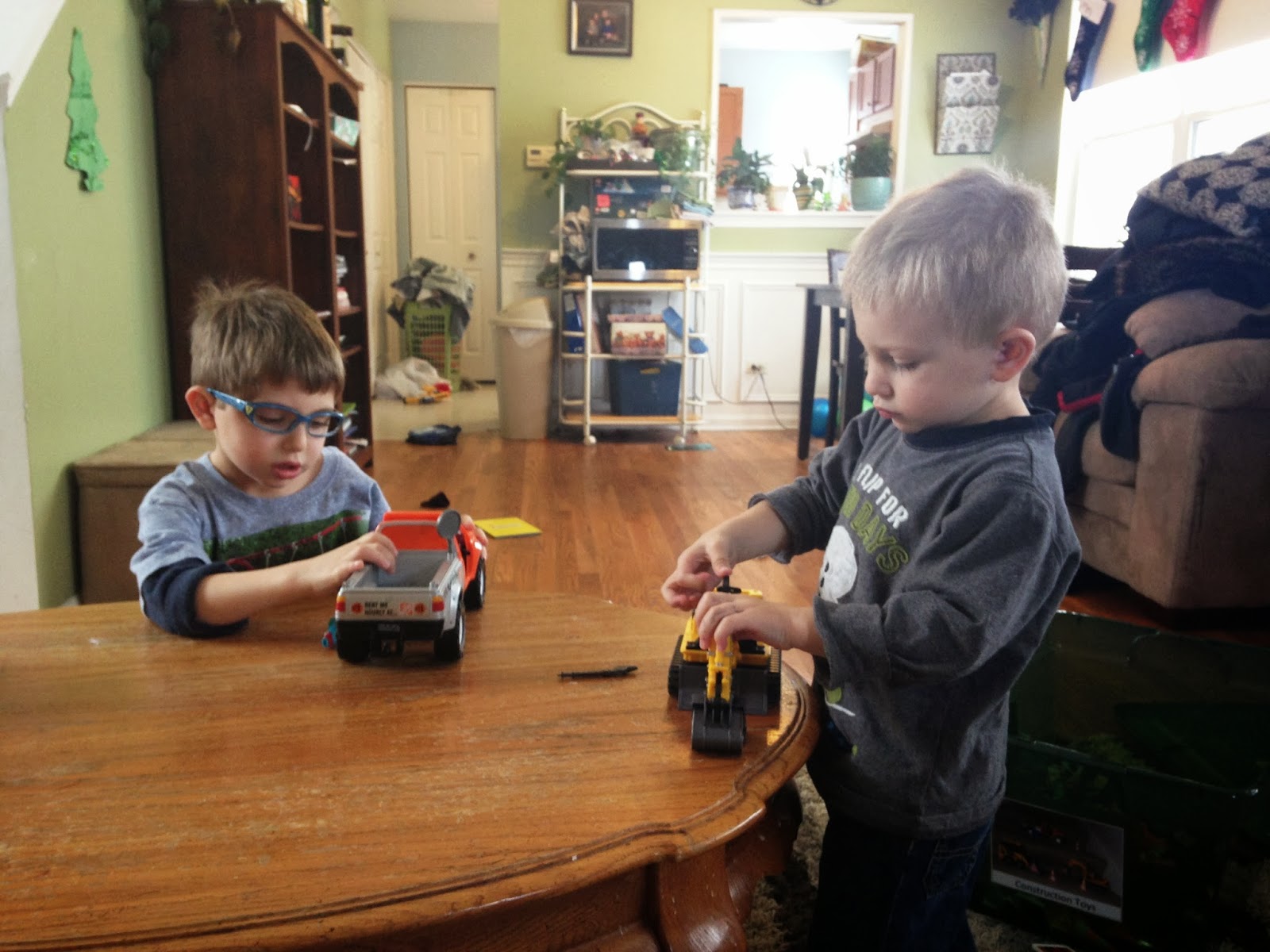 Greg and I tried keeping the boys constantly occupied with new and interesting activities. Nick wore these sunglasses with the lenses popped out nearly all day. He said he wanted to be like Daddy and Mommy. We both wear glasses. Daddy and Nick read some art books today, but Nick likes to ask questions about the most inappropriate parts of the more abstract pieces. It is as if he knows what questions will make us uncomfortable.


Greg and Nick spent a few hours clearing snow from outside. It was quite a task, as I understand, and it was hopeless to even try to get to the grocery store, so we stayed home all day. 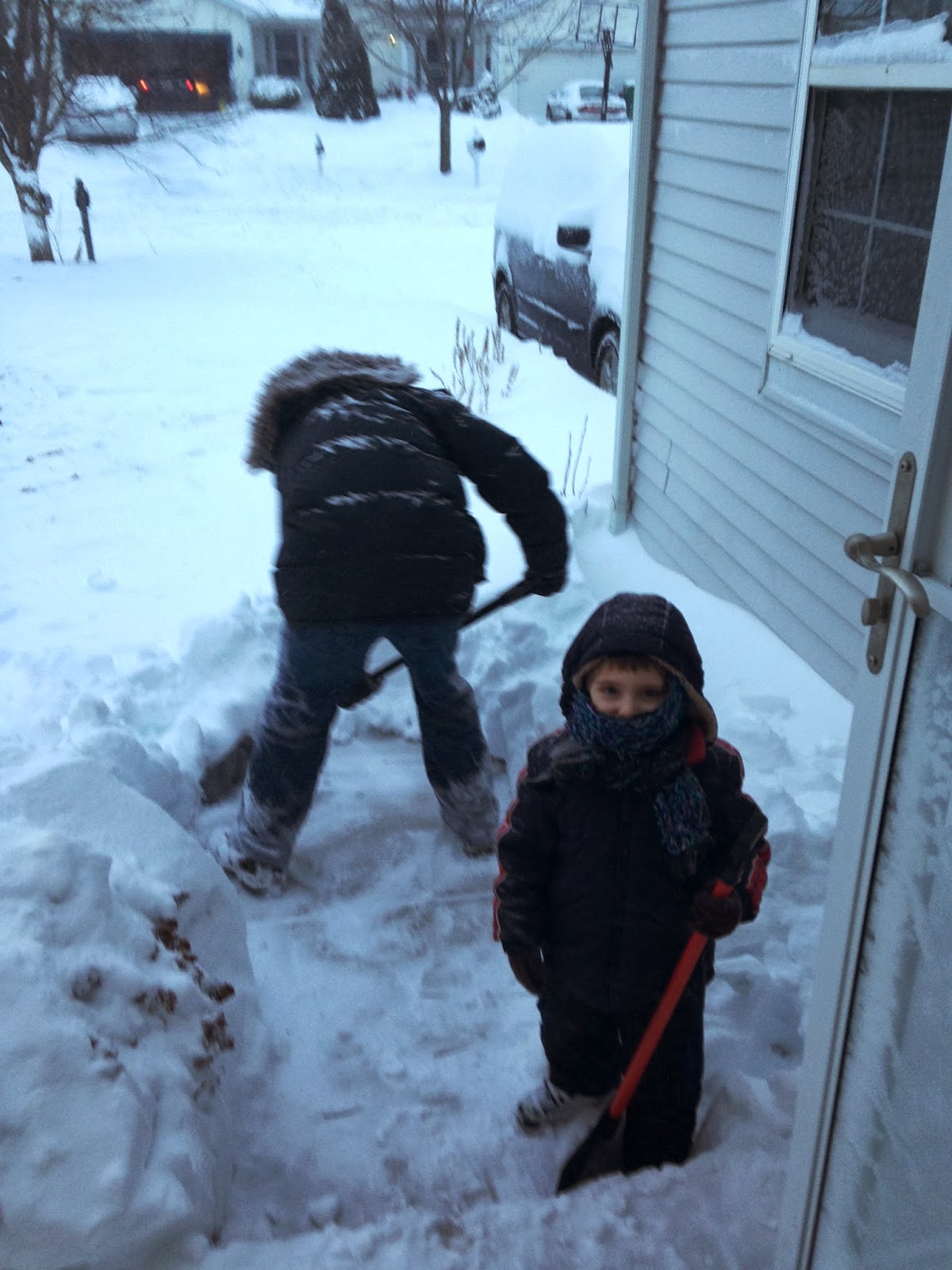 Nick lasted longer than I would've out there, though we made sure Nick got inside before the real temperature drop hit. I hate cold temperatures. I got the call right at noon that my district was cancelling classes for tomorrow, and Nick's preschool is cancelled as well. It isn't the snow causing most of the difficulty, but the record low temperatures. I saw that at one point tomorrow morning, the high is projected to be -14 and the windchill -42. That is too cold for anyone to be outdoors. 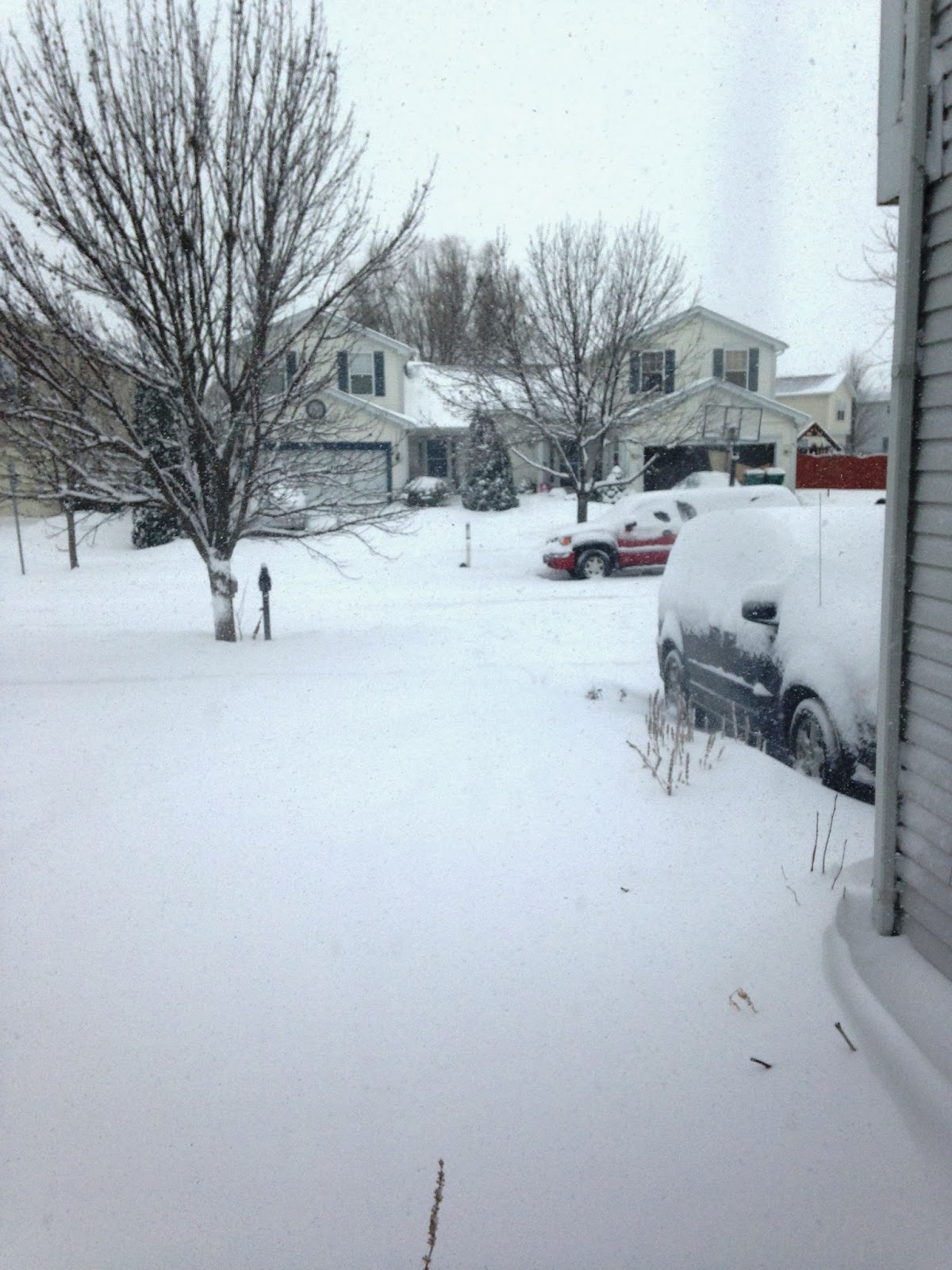 Henry and I did not venture outdoors at all. In fact, I've showered and put on fresh pajamas three times now since getting home on Friday. Why wear clothing when fleece pajamas are so much warmer?

He was, however, thrilled when I let him help me with my version of "Chopped." You know, the show where they give you a few ingredients and have you make it into a meal? Since we were pretty much out of everything, I decided to make snowman pizzas. We used string cheese, spaghetti sauce, and spinach. 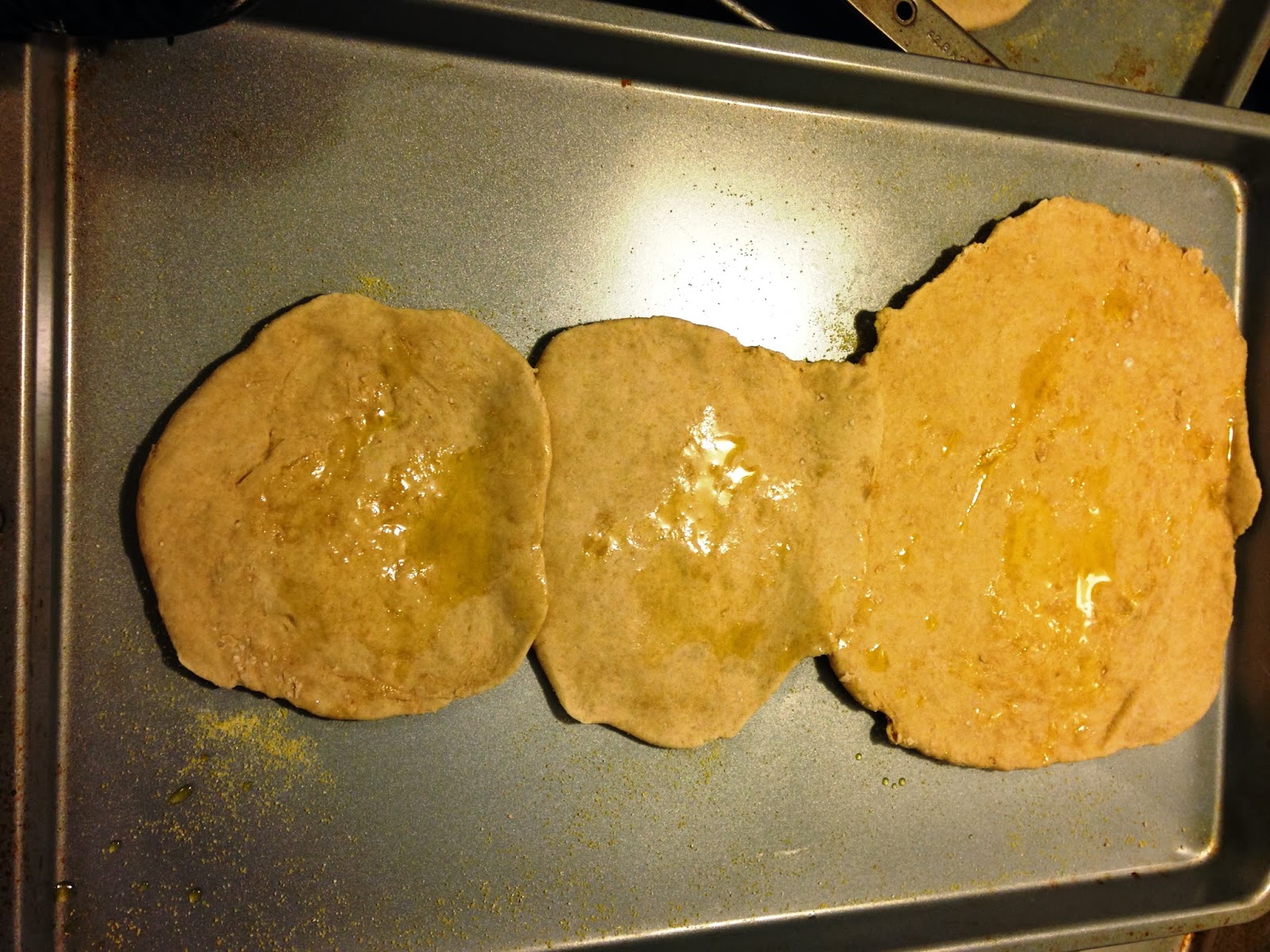 Henry loved eating the spinach and pushing the buttons on the food processor. The string cheese had a weird texture, but it was alright.

Nick helped a bit, too with the faces. We had spinach buttons, tomato eyes and mouths, and celery noses. I was running short on veggies and cheese. Henry had, apparently, eaten half a bag of string cheese in only a few days. 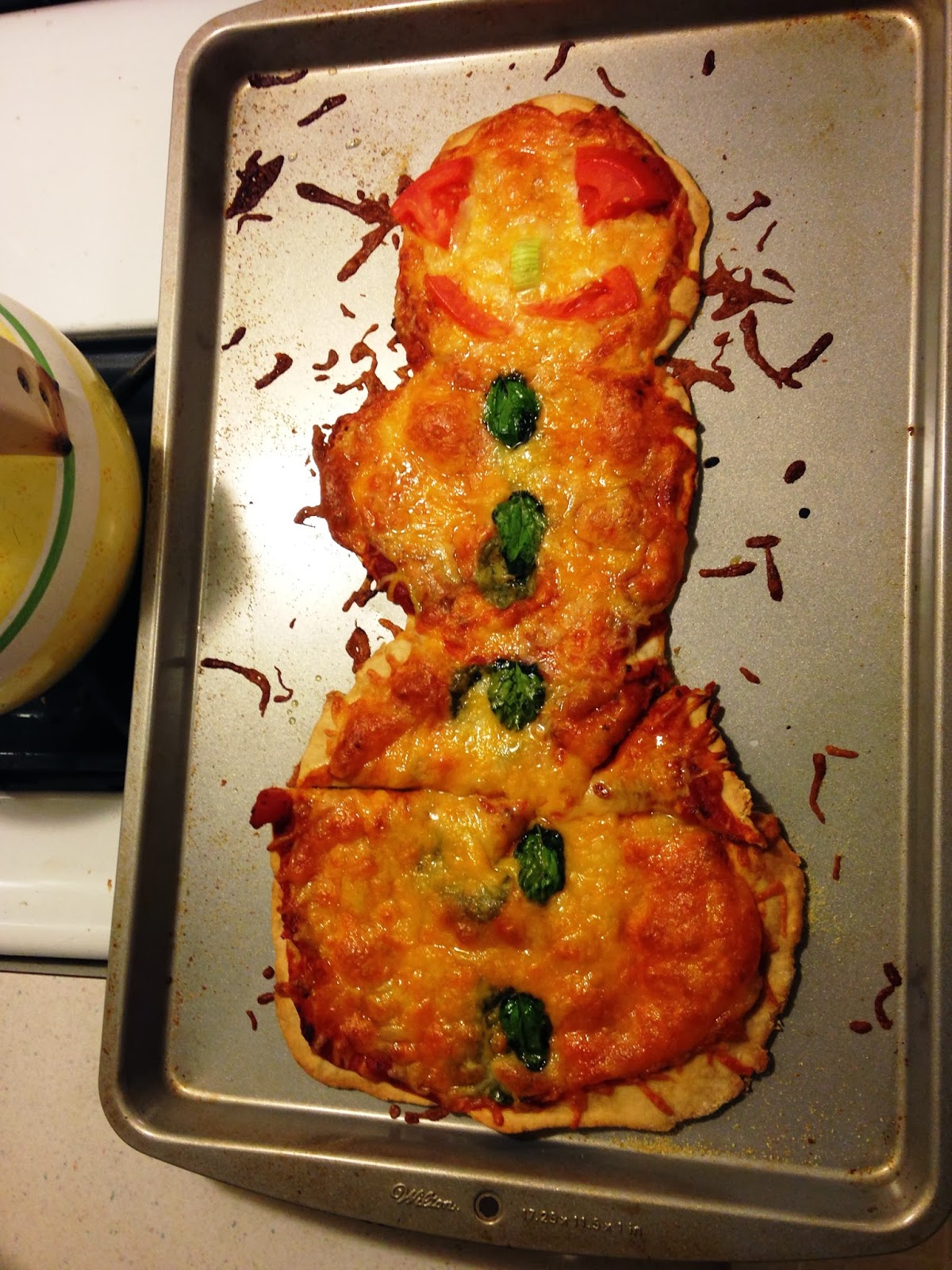 I ended up with three pizzas--two snowmen, made from string cheese and one from shredded Mexican-style cheese, and one snowball pizza (traditional round) with goat cheese and tomato chunks. The goat cheese one was the best, though I would've been "chopped" for any of the three pizzas. Next time: more spices.

Oh, and my Christmas Cacti bloomed, a little bit off schedule. That's okay. We needed a little color to brighten such a cold, cold day. 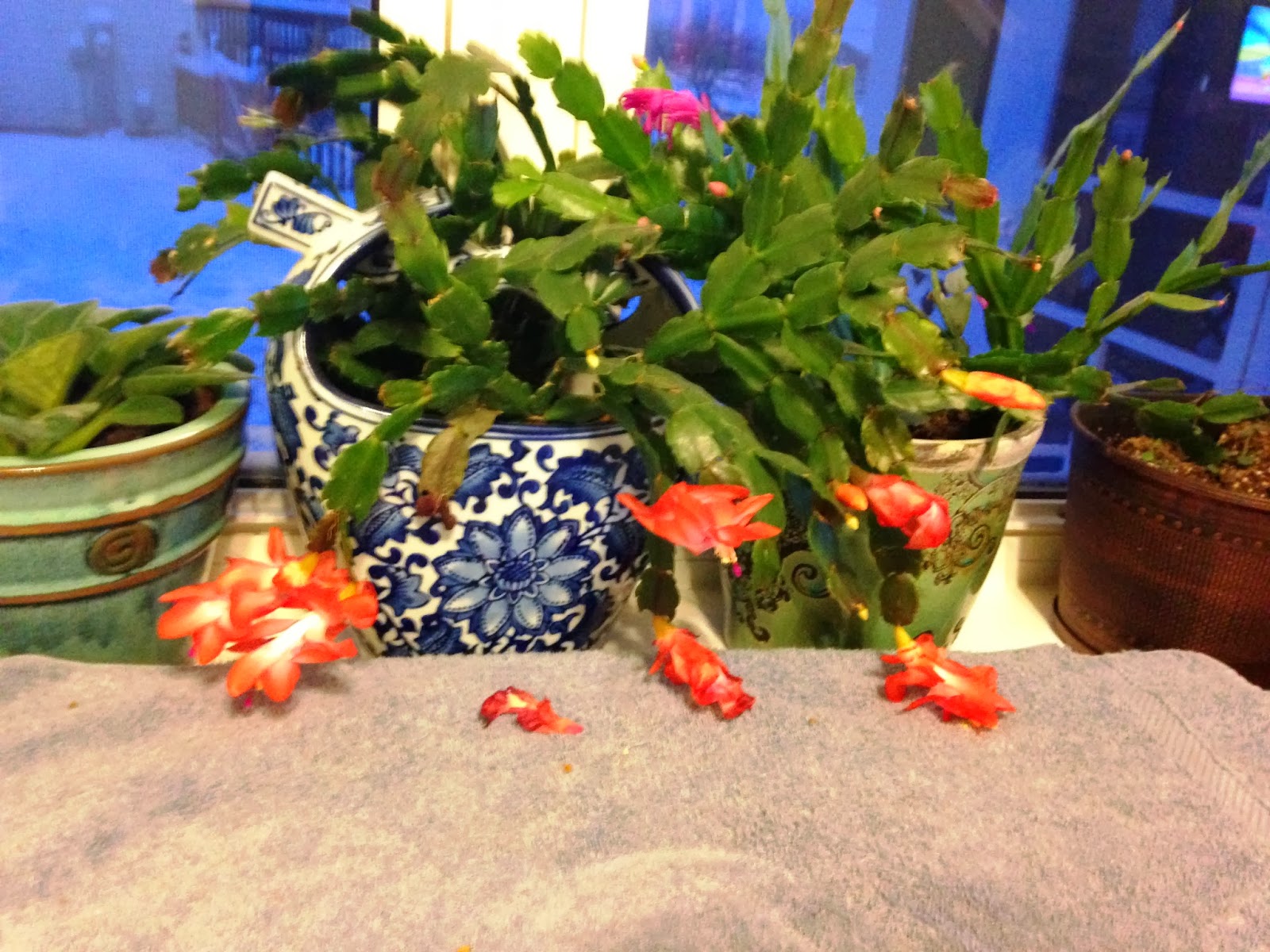