Lately, I've been posting a lot about Henry and his progress. I wouldn't want Nick to feel neglected, and he's been working just as hard. So this post is all about my big boy, Nicholas. Here he is Thursday in the doctor's waiting room reading from an ESPN magazine and trying to read the words. 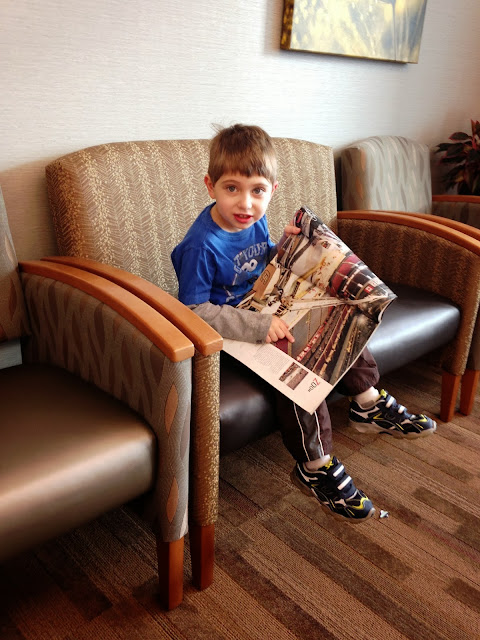 Since Nick has a weak core and a LOT of excess energy, his OT (Occupational Therapist) recommends that he do a lot of "heavy work." There are many ways to get this accomplished. I send him up and down the stairs to bring me things all the time. This allows me to be lazy AND do therapy with my kid at the same time. Today I had him bring clean towels up to the linen closet. He found the cat, Molly, who, sadly, had somehow gotten locked in. Good think Nicholas was doing heavy work! He was the kitty hero! (The towels, however, had to be rewashed. Poor Molly is an older lady cat and was in the closet a very long time.)

What you see him doing above is simply pushing a heavy box from the carpet to the kitchen and back again. He gets an M and M for every time he does this, and it really tires him out and works his muscles. Then, I trick him by purposely shorting him M and Ms, making him count to verify, and then having him request the correct number of candies; Ms. Wednesday he earned ten, but I gave him 8 and made him figure out that I owed him two more. Of course, I ate an entire handful without pushing any boxes.

If I haven't mentioned it recently, my husband Greg is a self-taught artist with some real talent. As a reward for good behavior Thursday, Nick got to stay up an hour late and draw with his daddy. Nick chose to draw the kitty he rescued from the linen closet. He was really focused, and his cat turned out better than I could've imagined a five-year-old could draw. 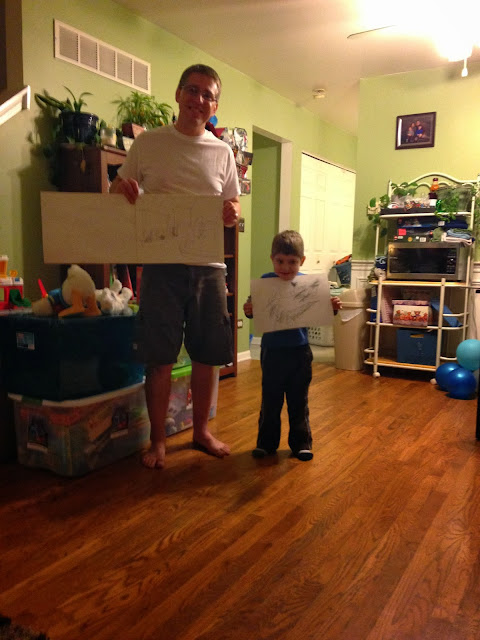 Nick even wrote "CAT" on the top, all by himself, with no prompting.

Nick even turned the paper over to draw another kitty. I think he did great with the kitty ears here. 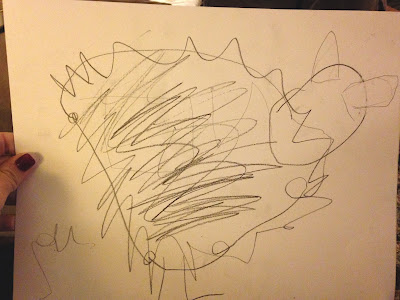 Here's what Greg drew. It's the beginning of a drawing of one of the pretty little squares in Gatlinburg, with a beautiful fountain. 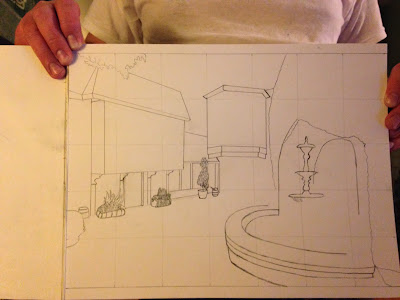 I am very proud of my big boy! Here he is visiting the polar bear exhibit outside of Henry's surgeon's office. He's patting the head of an adorable penguin. The boys pointed out today, though, that polar bears and penguins live on opposite poles and wouldn't pose together. I figured that was besides the point, because the polar bears would just eat the penguins. 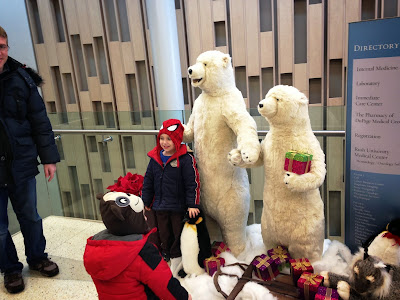