Greg and I were just adding it up, and we truly only spent forty-five hours in Ohio. I didn't take many pictures, because I was too busy kid-wrangling and dealing with all of the detritus that comes with traveling with two small children.

On Thursday, immediately after Nick's first day of preschool, we headed onto the expressway to begin our journey. Most of the day was spent traversing the fascinating state of Indiana during a big thunderstorm that seemed to go on forever. We finally crossed the border into Ohio Thursday night around 6 p.m., and after another few hours, we pulled up to the dealership. 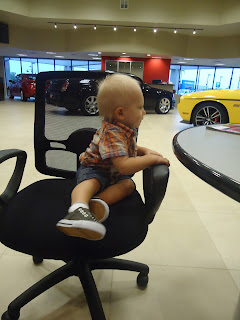 There is a lot of paperwork involved in purchasing a new car, and there isn't much to entertain young children while said paperwork is being completed. This dealership also had special sports cars on display. Both of my boys were fascinated with the cars, but weren't allowed to even touch them. So while Greg filled out the paperwork for our new minivan, I chased little boys and wrestled them away with from the muscle cars. We were exhausted by the time we finally got back to the hotel. 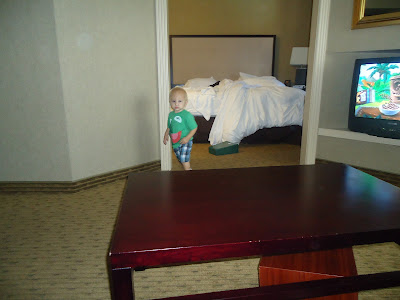 The next morning, we hung around the hotel and ordered a room service breakfast. The boys made a mess playing with the garbage cans, and Henry climbed on everything in sight. I'm actually not sure why Nick was chewing on his blanket. 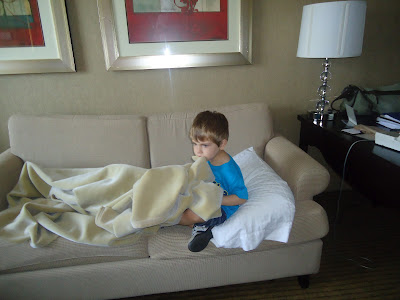 We stayed at the Doubletree, and were really pleased with our choice. The food was great, our room was lovely, and the pool was fun, if a little bit cold. Henry went in with his special "turtle suit" life jacket. While wearing it, he can float on his back peacefully. 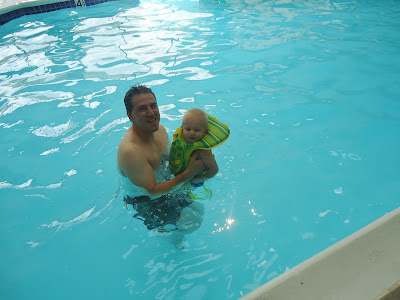 Nick was a little more reticent about the water. He finally did join me in the hot tub, but he never strayed from the edge. 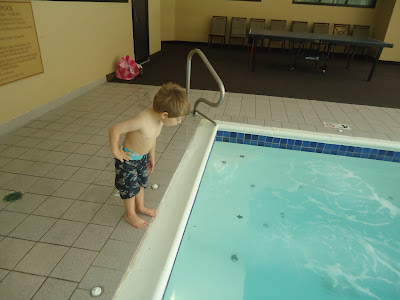 We spent some time visiting with Greg's Uncle Todd, too. Nick really loved him and his pool table. Uncle Todd is a bachelor and he has lots of really cool toys, just not the kind that hold up to toddler abuse. So we had to be really careful.

We left Dayton Saturday morning, but didn't cross over into Kentucky until around three in the afternoon. That's because we went through the foothills of the Appalachian mountains in southeastern Ohio. I have never been on roads like that before. It was downright scary going up and down and around the curves. Nick and Greg were calling the sudden drops in the road "ticklebumps." They didn't tickle me, they made me nauseous. The country was beautiful, though. It took so many hours because the speed limits on most of the roads were 35-45 mph. When we finally crossed over into Kentucky, I was relieved that the roads had been cut into the mountains so that they were relatively flat. Ohio was gorgeous, but I couldn't take many more "ticklebumps" at that point.