We did have a birthday party for Henry this year, but it was a few weeks after his birthday. He certainly didn't seem to mind--it just stretches out the fun. 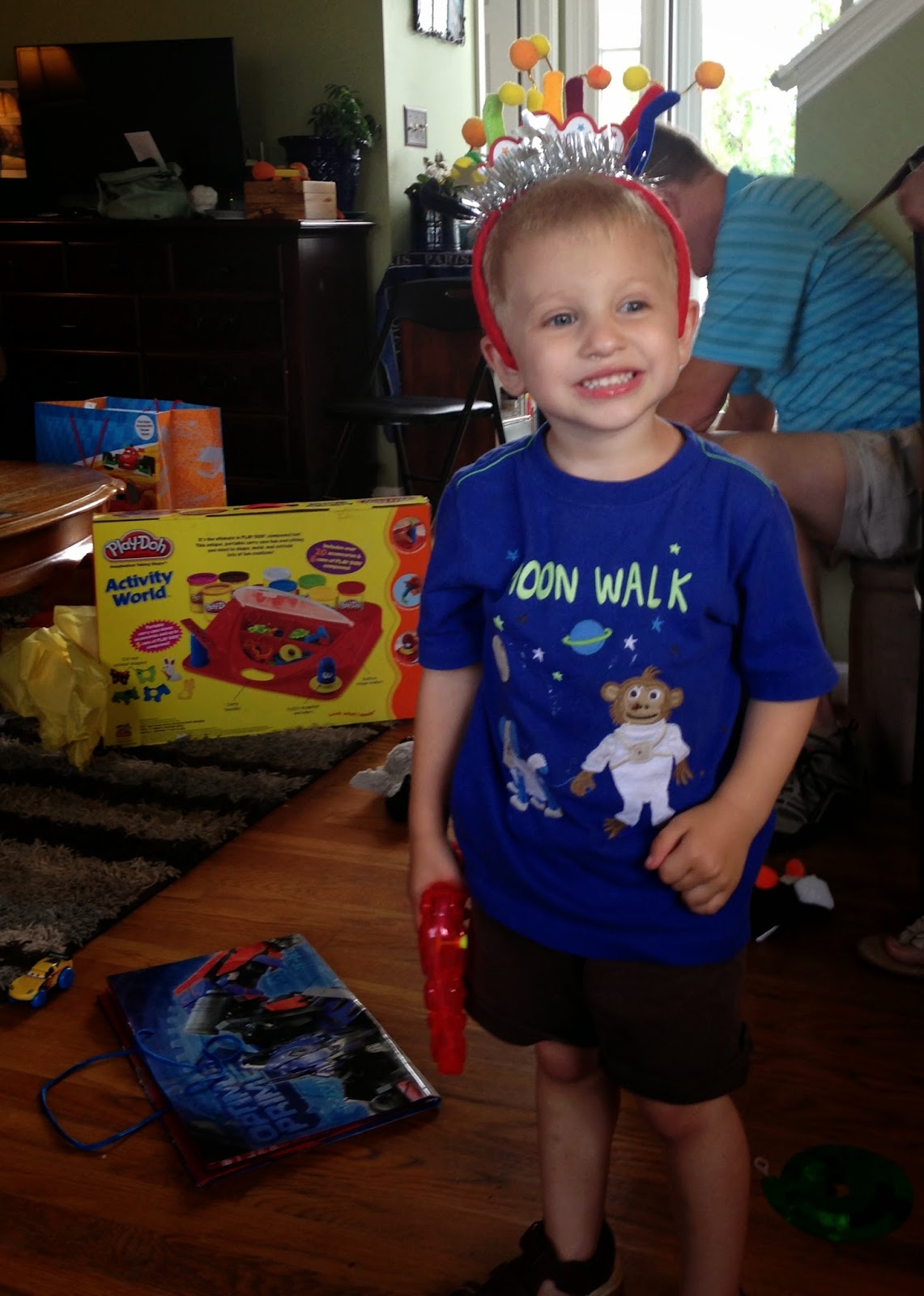 Every little boy likes presents, but Henry got some awesome cards this year. One of them even had talking Star Wars robots. I think he was waiting to see if all the cards would talk. 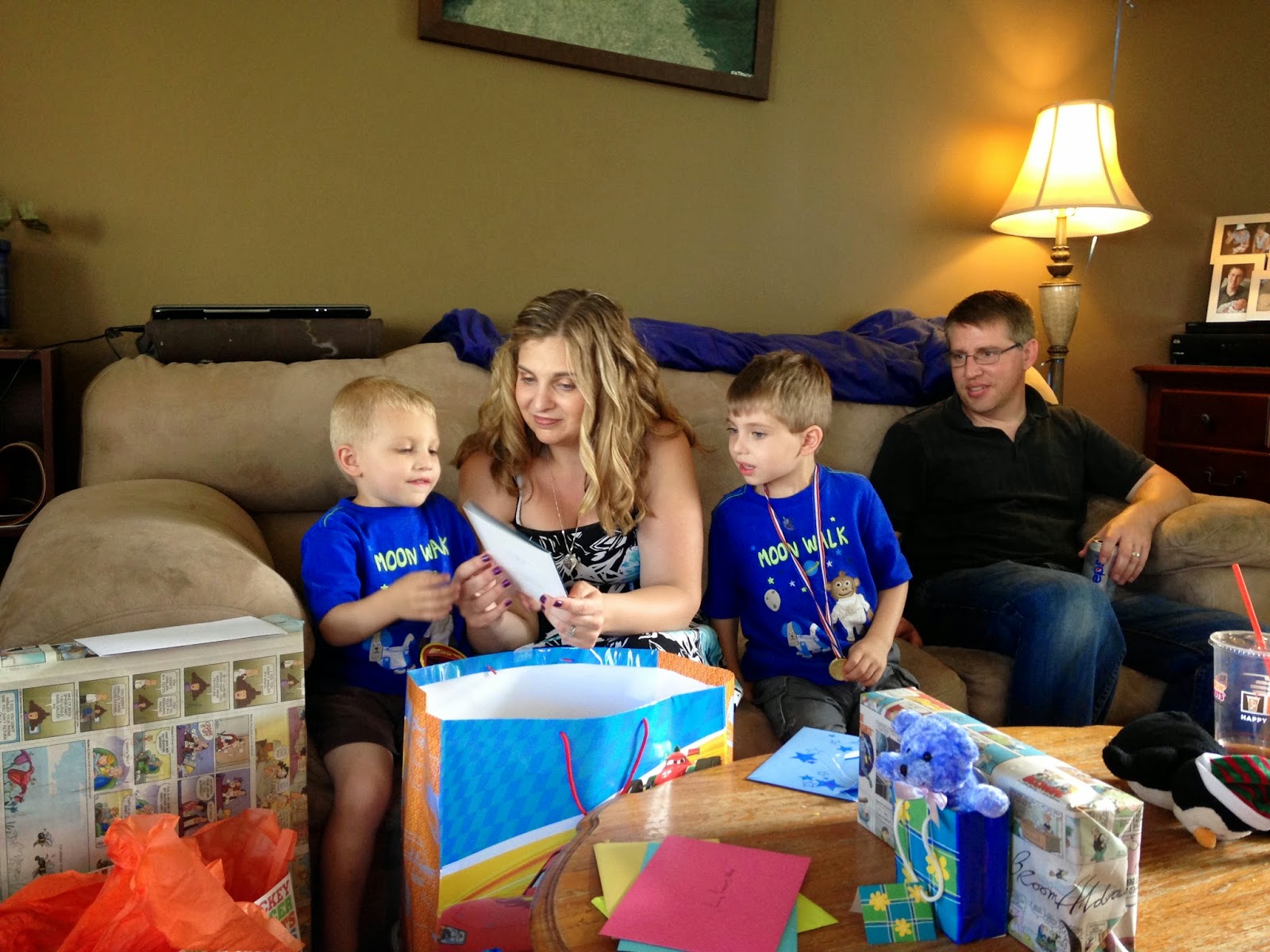 Henry got some pretty awesome presents, including a Darth Vader doll and a hoodie, which I am wearing in this picture. 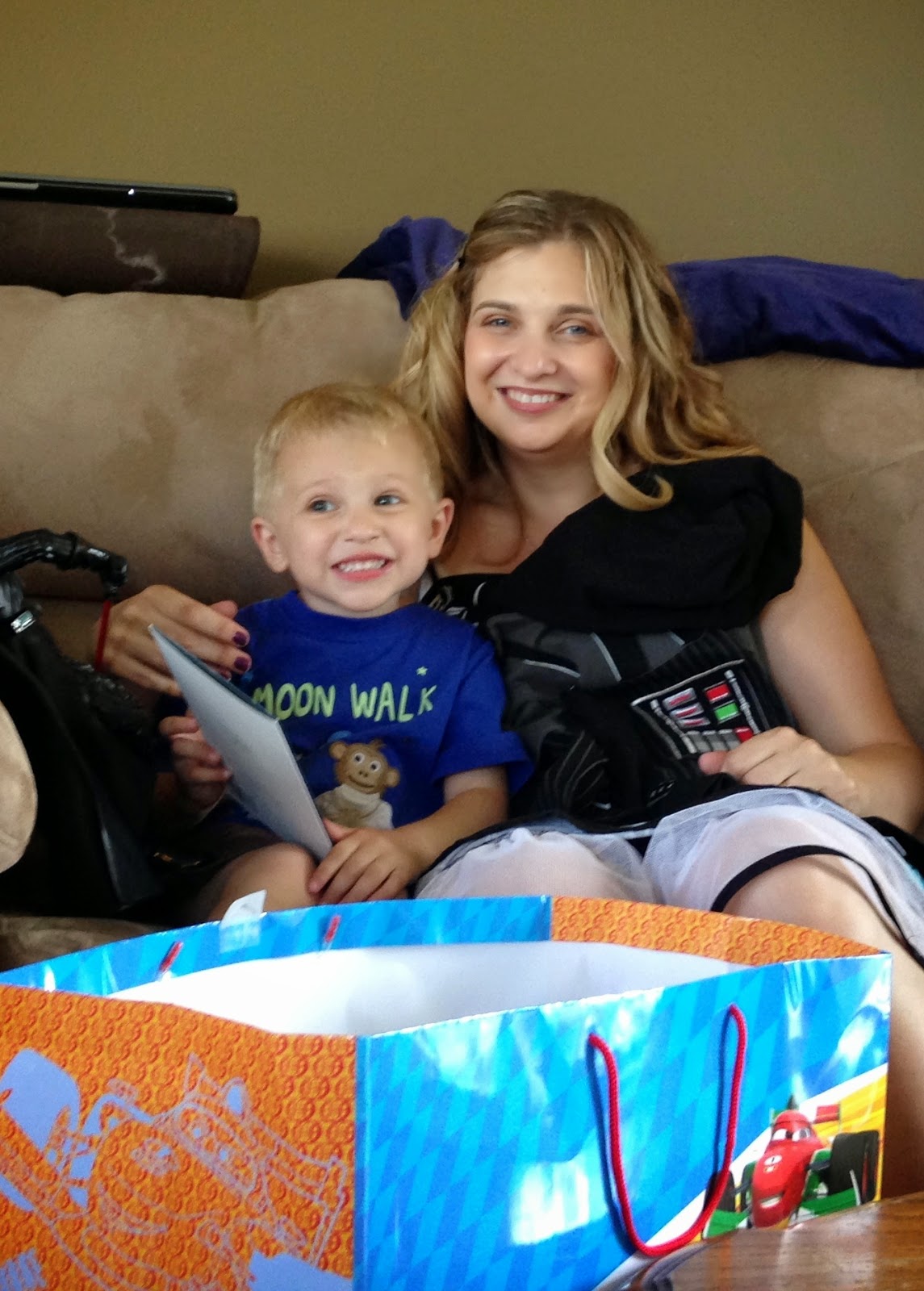 Another one of Henry's presents was this very cool dragon. He even let his new dragon friend try on his birthday hat. 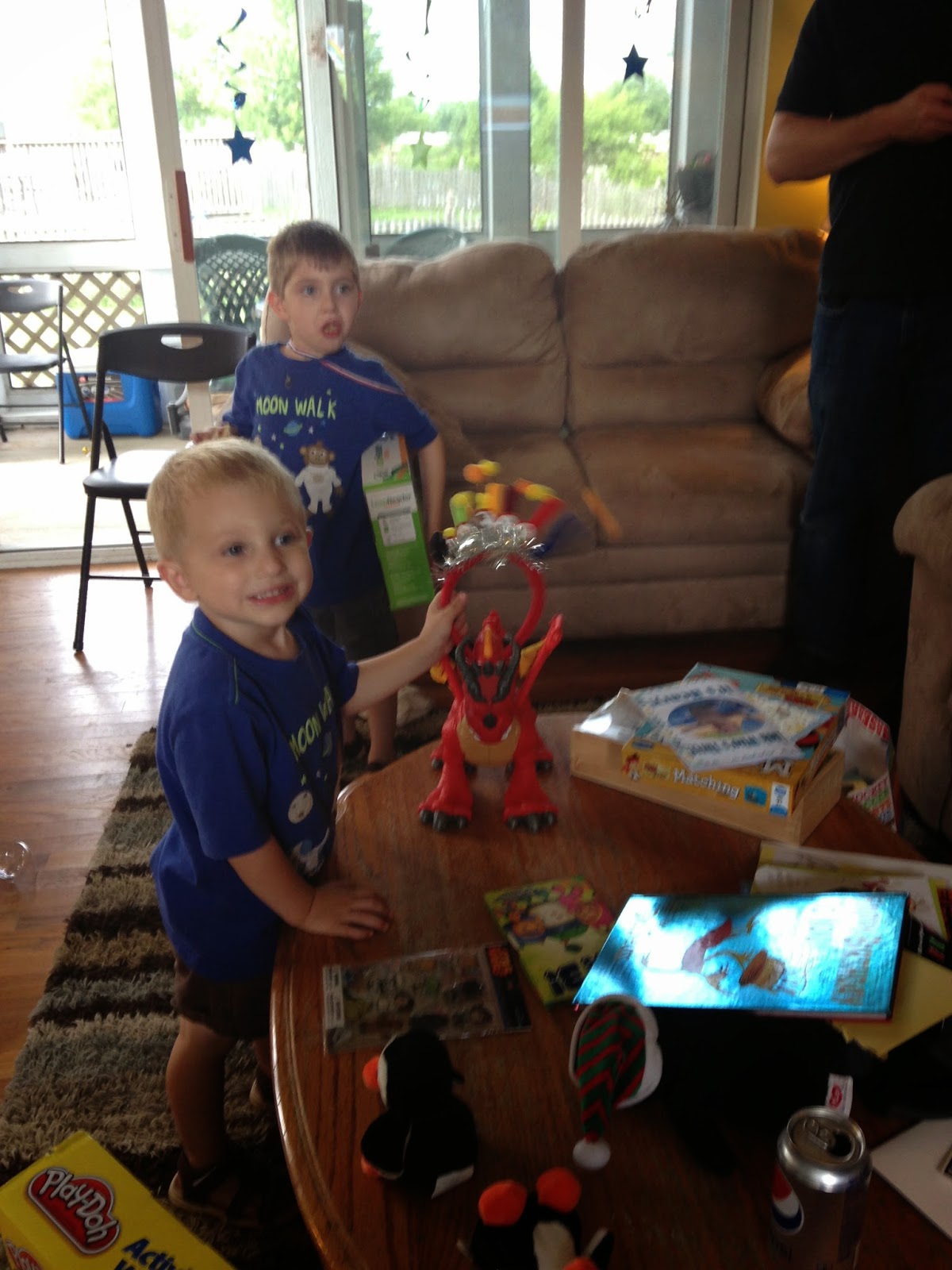 Henry also got this really weird and cool balloon that had little feet and a face. Auntie Mandy liked playing with it, too. 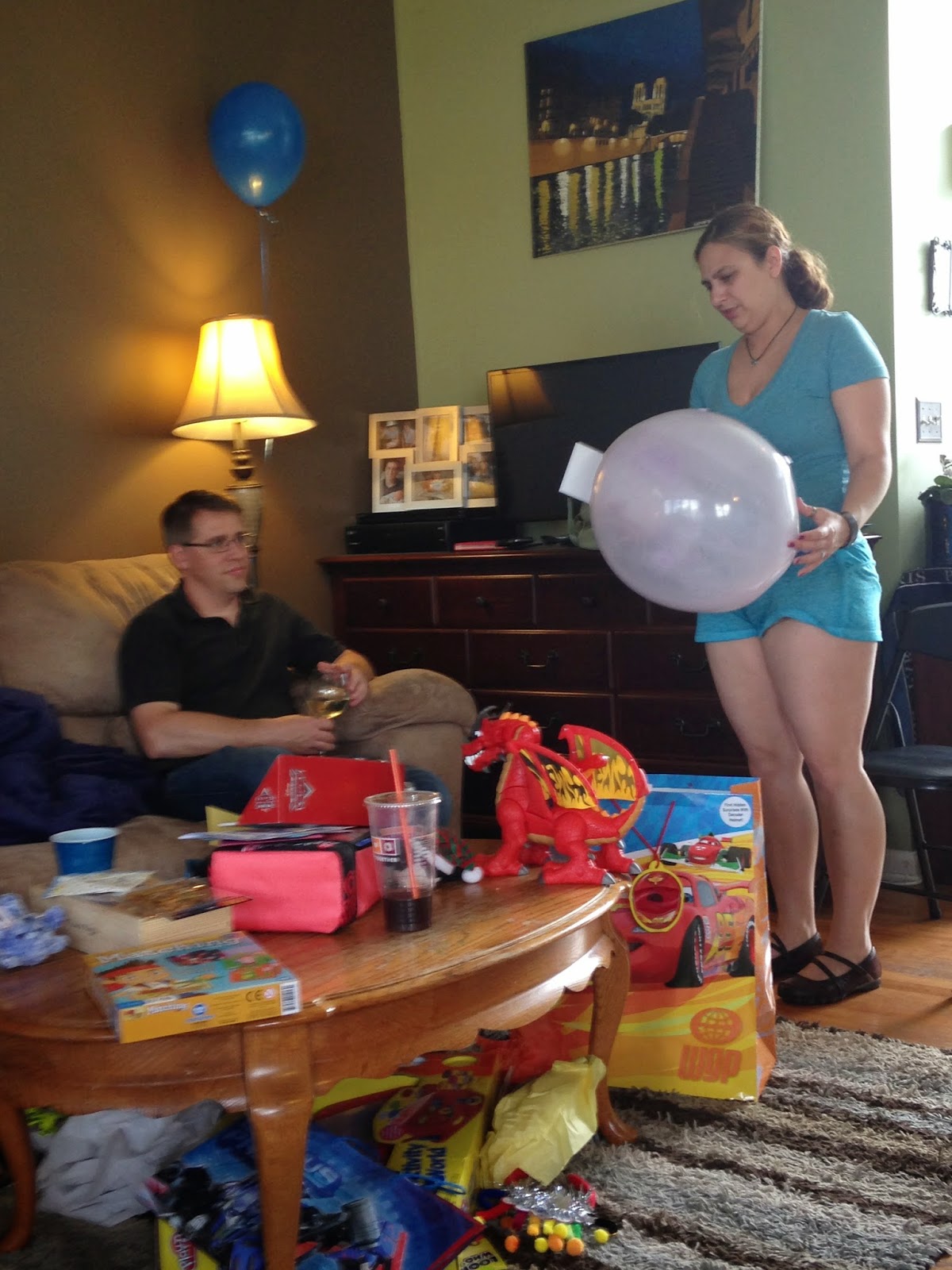 Henry had fun opening presents and giving hugs, but his favorite part was when everyone sang to him. Check it out--my boy can blow out his own candles now! He's been working on this all year, since his surgery.  :)

Henry was very enthusiastic about his cupcakes. Let's just say much sugar was eaten by all, but no one enjoyed it as much as the birthday boy. 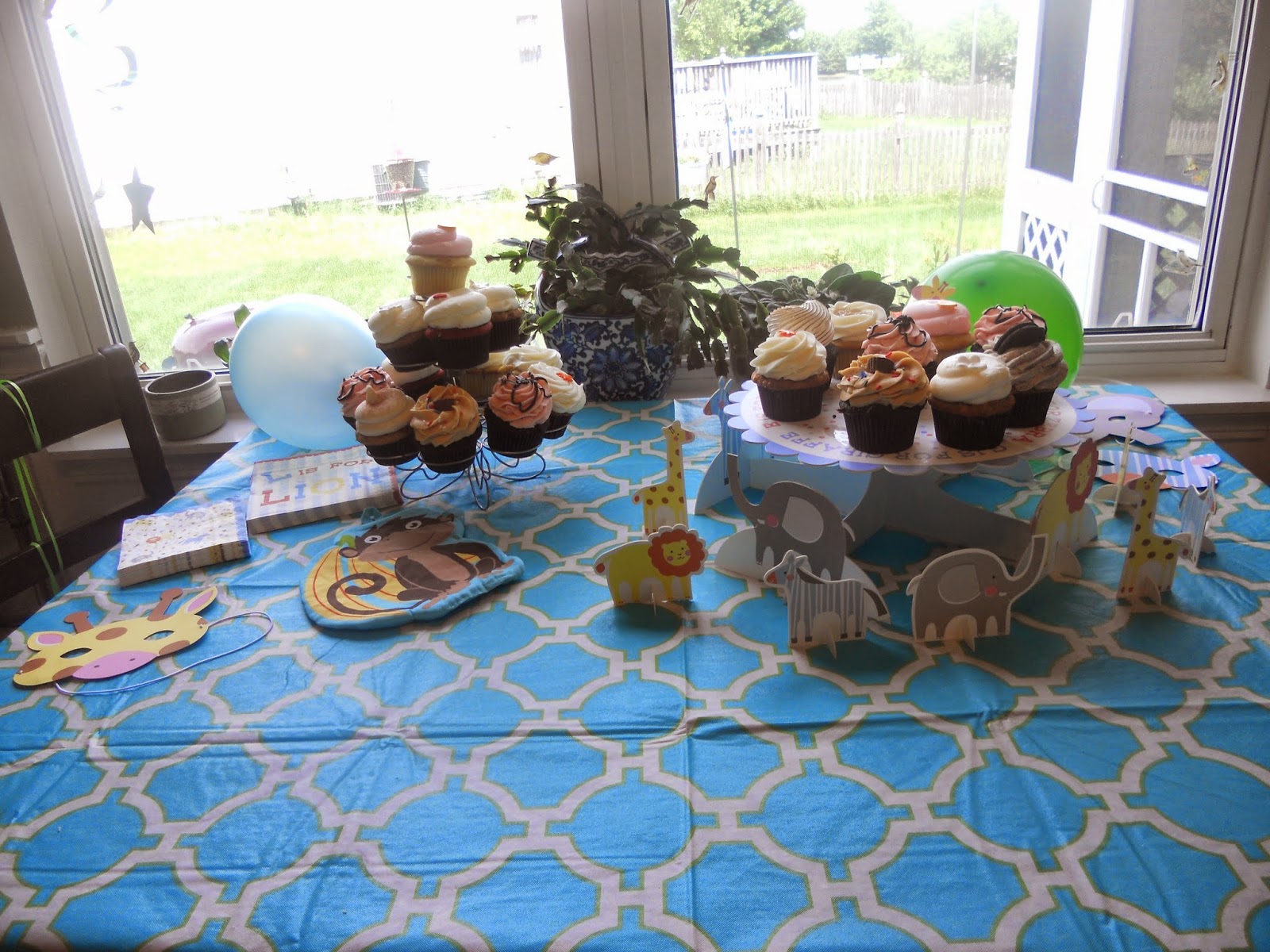 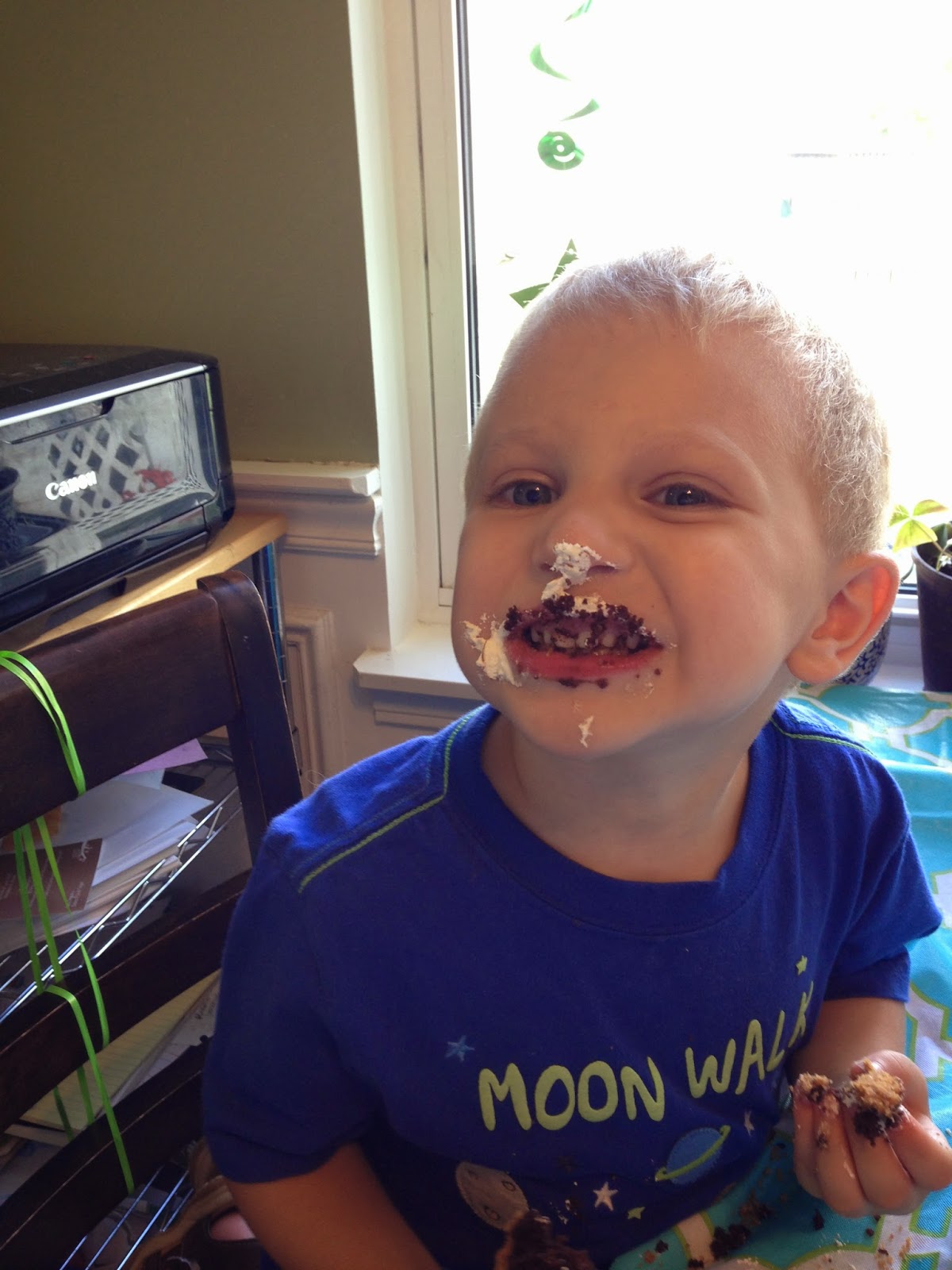 We had lots of visitors to wish Henry a happy birthday, and he got a chance to snuggle with many of them. 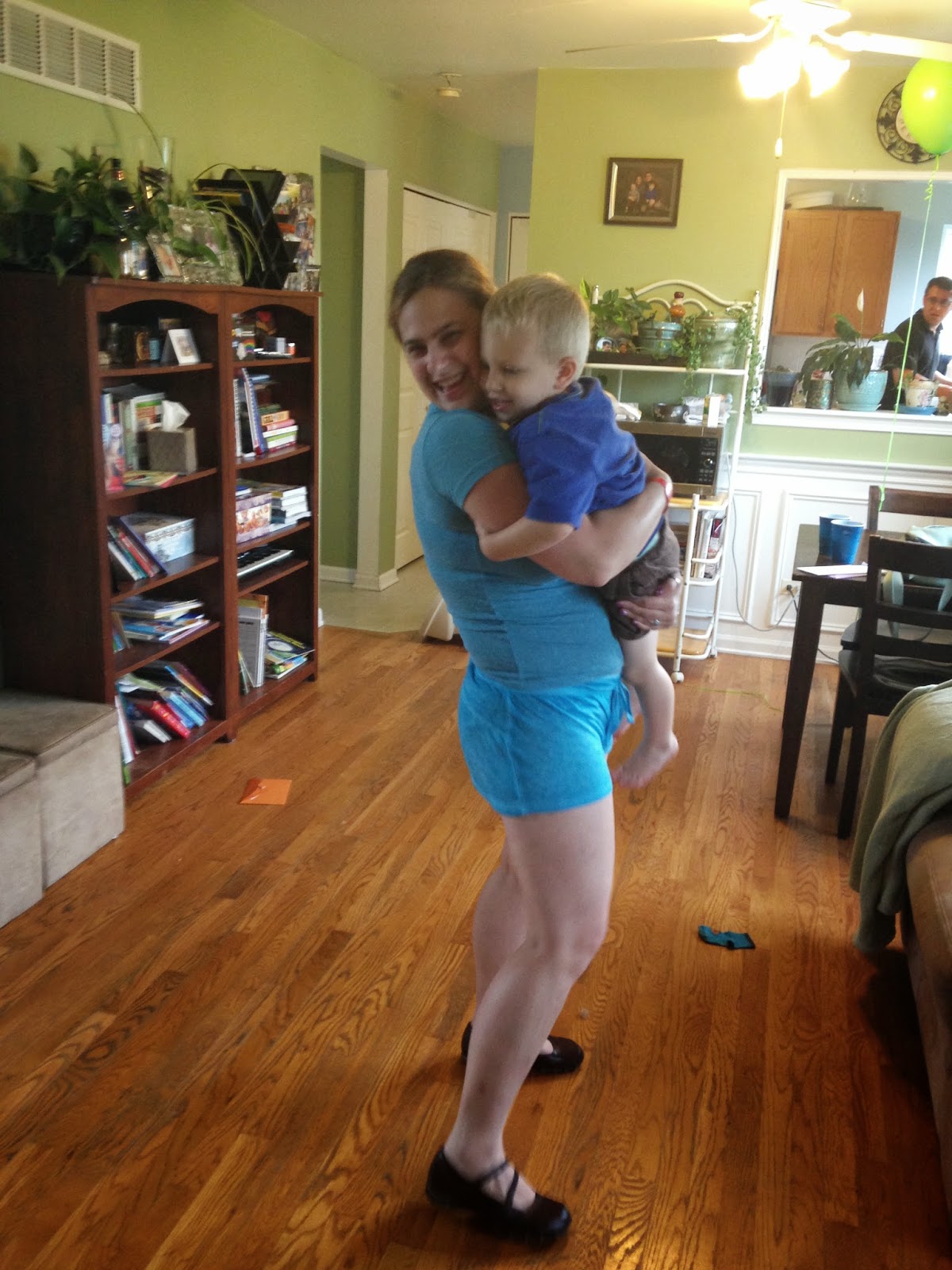 Birthday parties are one time where Nick and Henry get to see all of their grandparents at one time (four grandmas, three grandpas, and one great-grandma). The boys tried to spend some time with each of them. 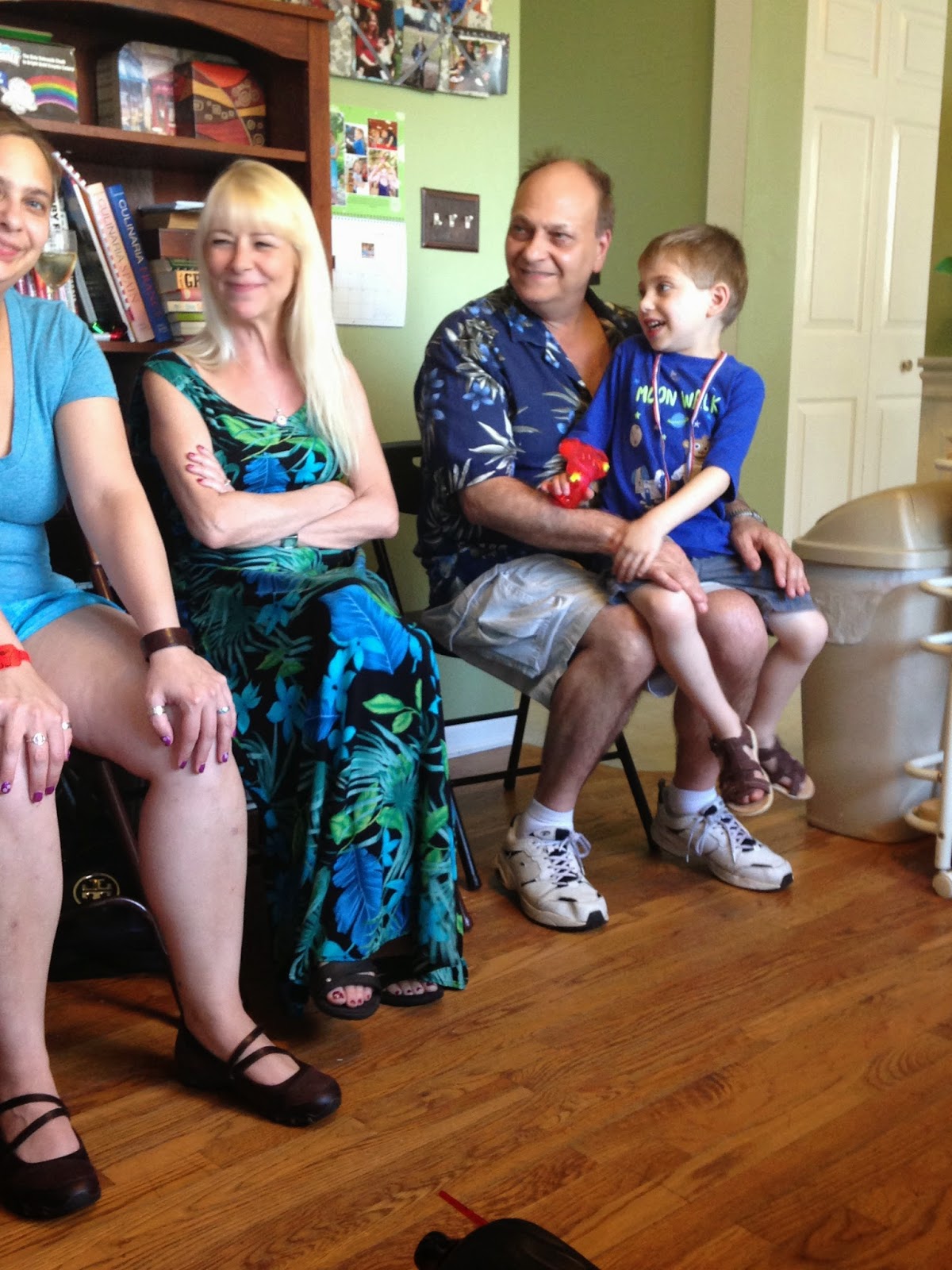 That's a water gun Nick's playing with. He loves pretending to shoot water at everyone. 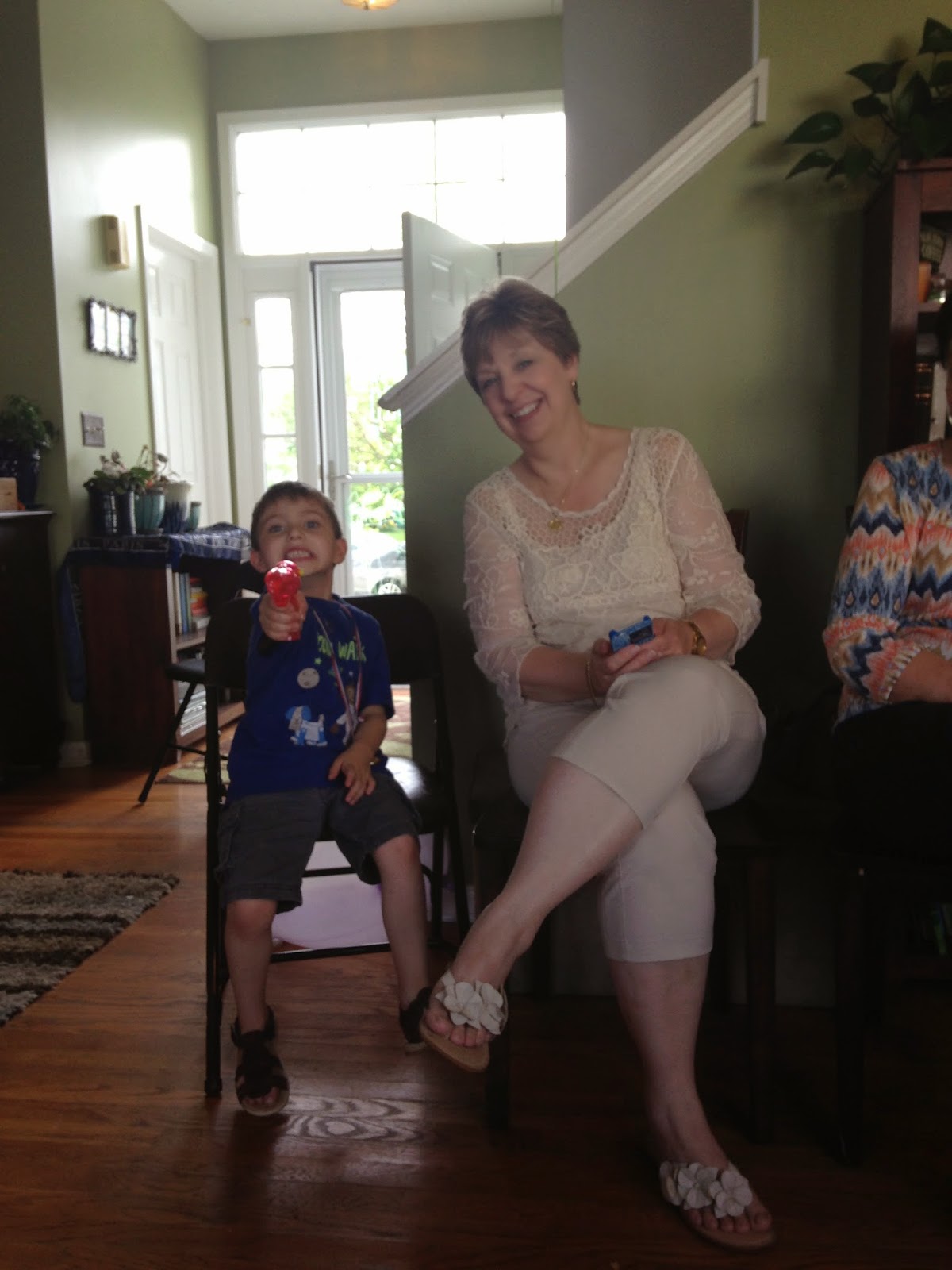 Strangely enough, many of the people who attended this party happened to wear turquoise. This was not a prearranged thing, just an odd coincidence. So we took a picture. 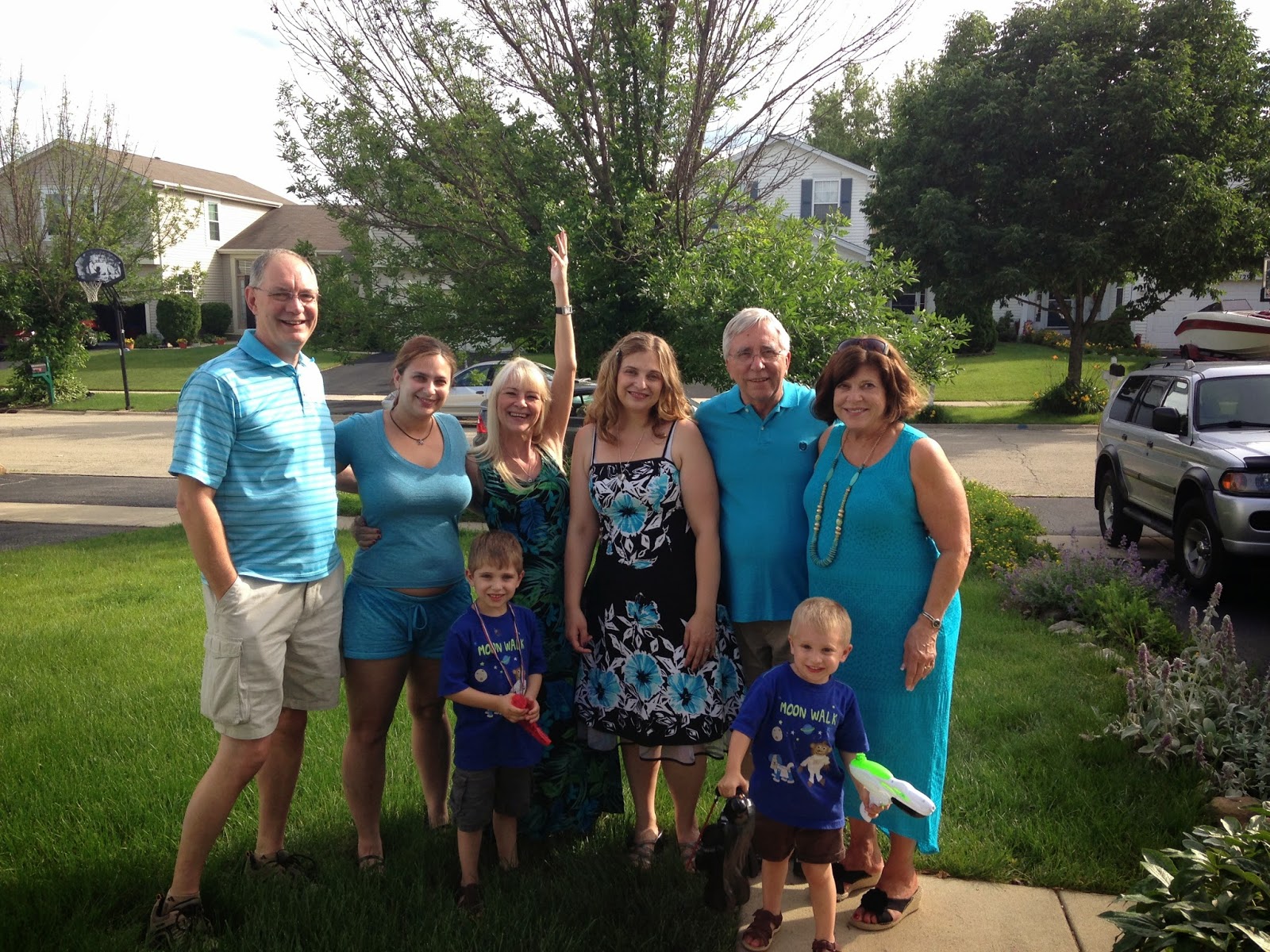 Birthday parties involve a lot of work and preparation, but the smile on Henry's face was worth all the hard work. Or maybe amnesia just sets in during the time between birthday parties, and I only remember the good parts. I'm okay with that.  :)
Posted by Melissa E. at 9:58 PM