Pancakes, Cheese Puffs, and a Puppy: A Visit to G.G.'s House

Earlier this week, I took the boys up to my grandmother's house for a visit. They were extremely excited on the drive up to Schaumburg and they kept asking me all kind of questions. "Is the puppy going to play with us?" "Will GG give us candy?," "Does GG have toys for us to play with?" "Will GG take us to the park?" 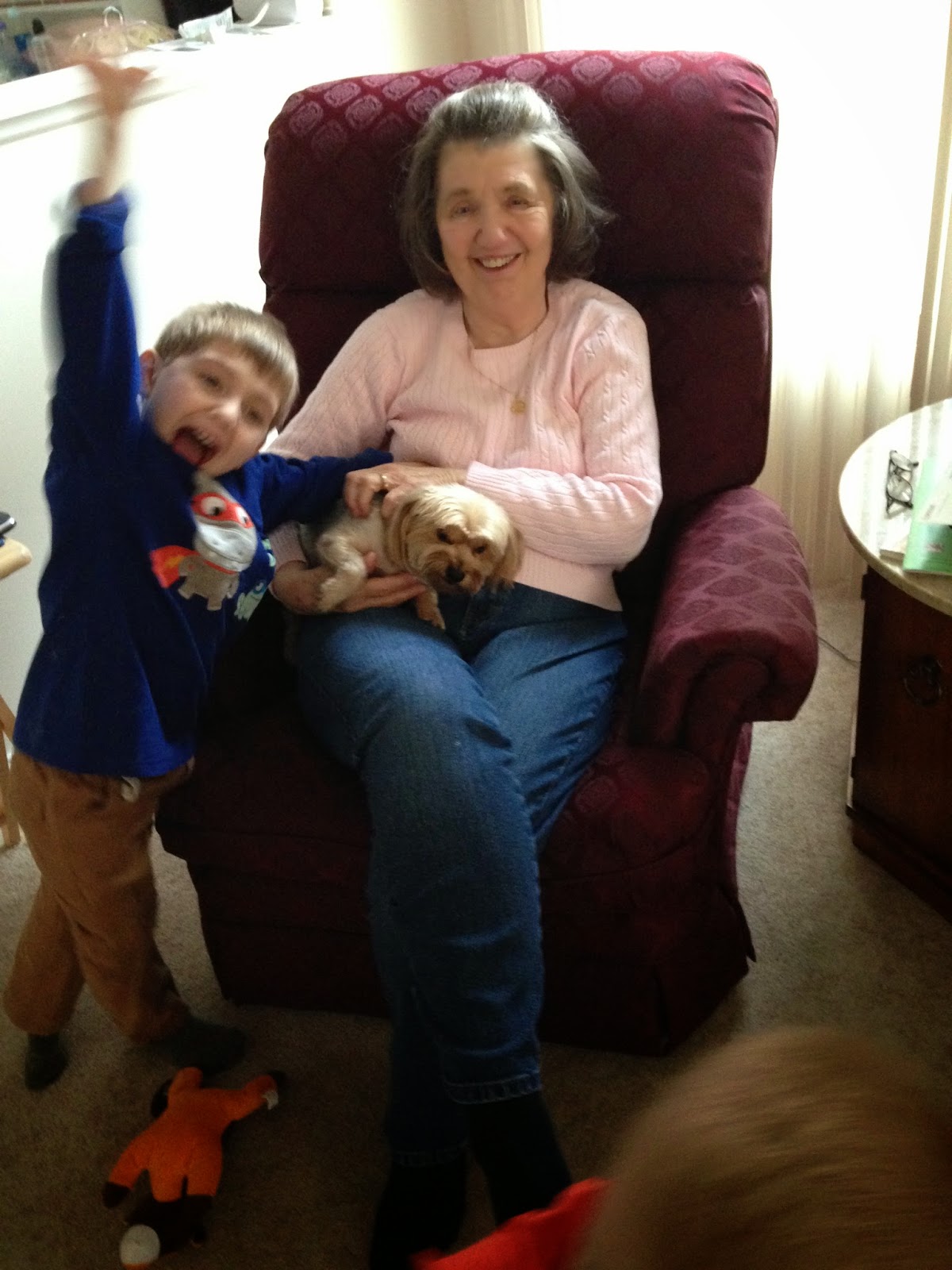 My answers? Yes, probably, no, and maybe. (GG usually does feed the boys yummy treats.) Our first order of business was lunch. We went back to the Wildberry Cafe, which has the most delicious pancakes. 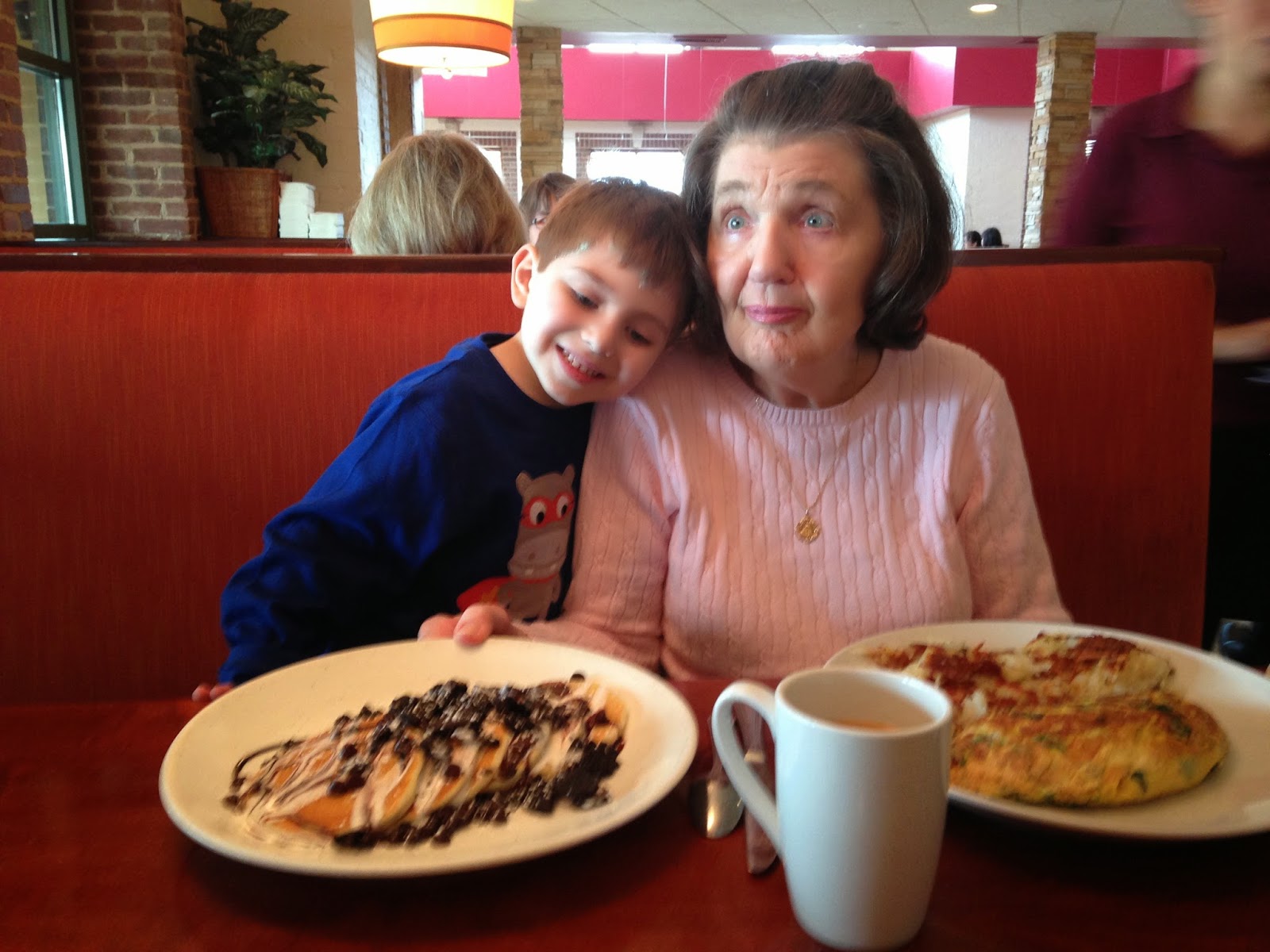 Nick had these awesome Oreo S'mores Pancakes, then had the audacity to ask if he could have dessert. I told him those pancakes were dessert. Henry didn't ask, he just stole tons of Nick's pancakes. 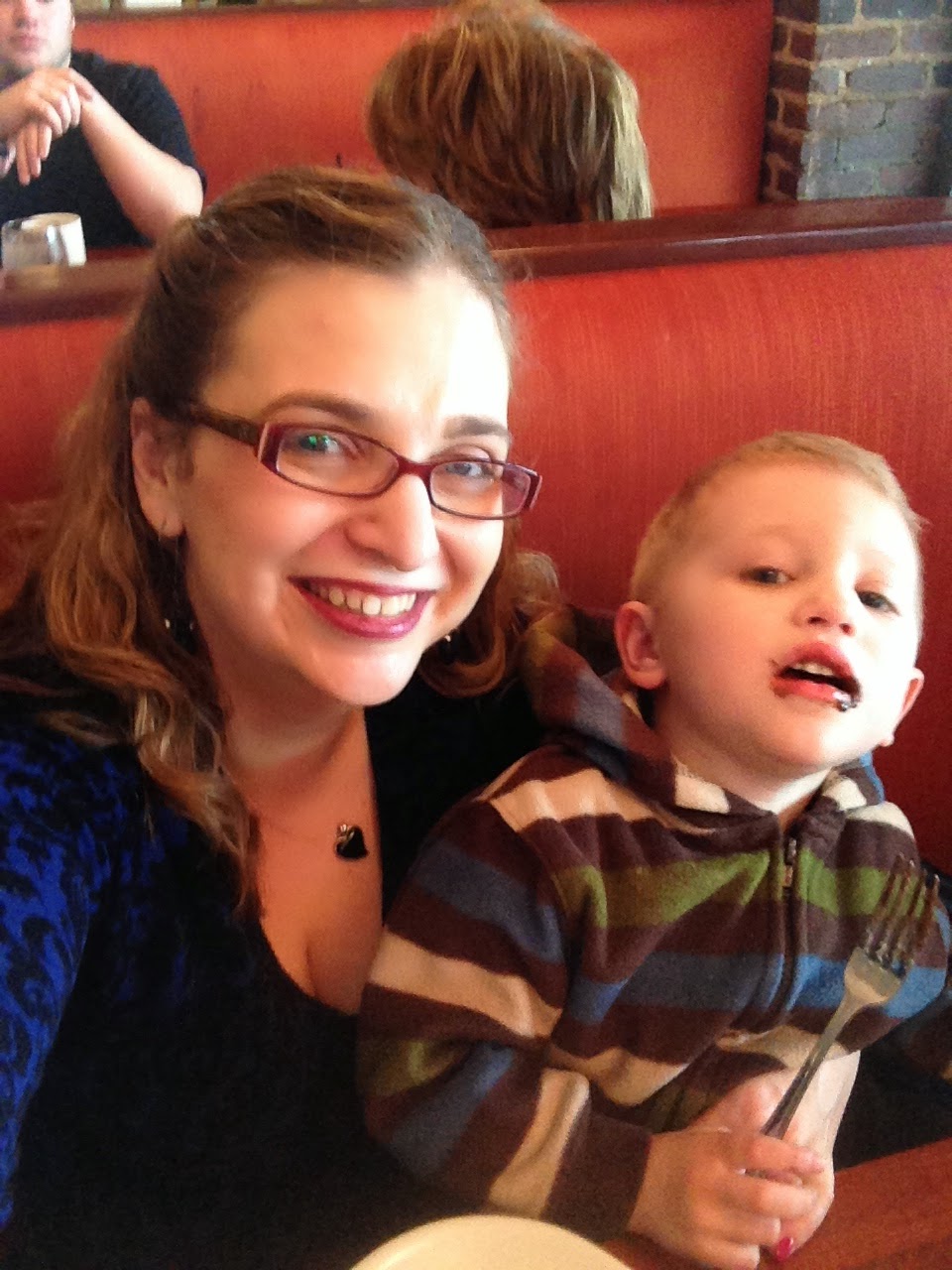 When we got back to the house, we did indeed go to the park, per Nick's request. GG even let him walk Lucy, at least when we were far away from the street. He did a pretty good job, I think.


The park was really cold, but the boys needed to run off their energy. So much for springtime. At least it was sunny that day. Nick has mastered the monkey bars. Henry? Well, he was jealous that he couldn't swing on them yet.


Even though GG and I were a little bit chilly, we let the boys run some of their energy off. We figured they'd be tired when we got back to the house. (We figured wrong.) 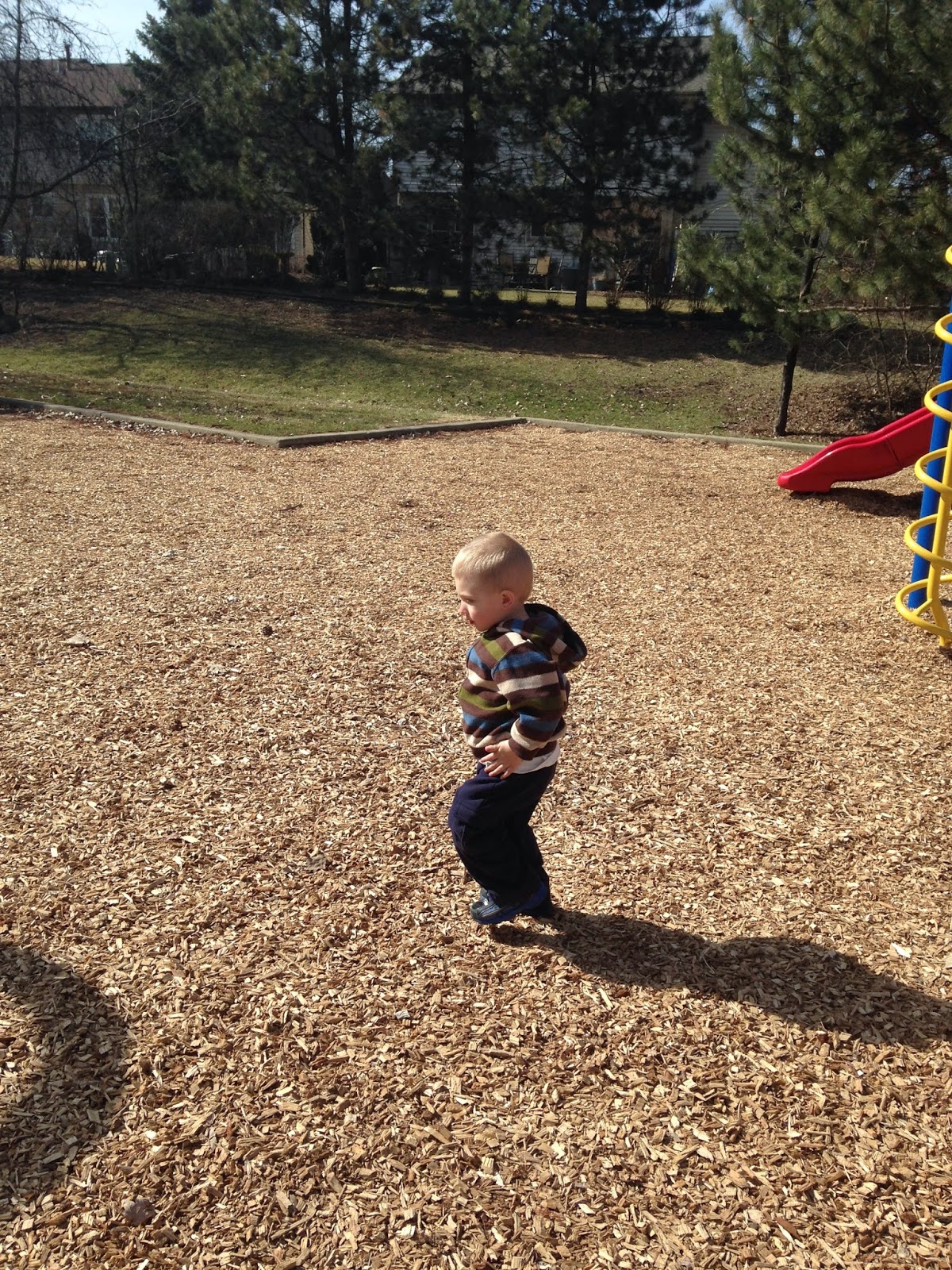 Nick really loved Miss Lucy, and I think she liked him, too, except when he was trying to pick her up. 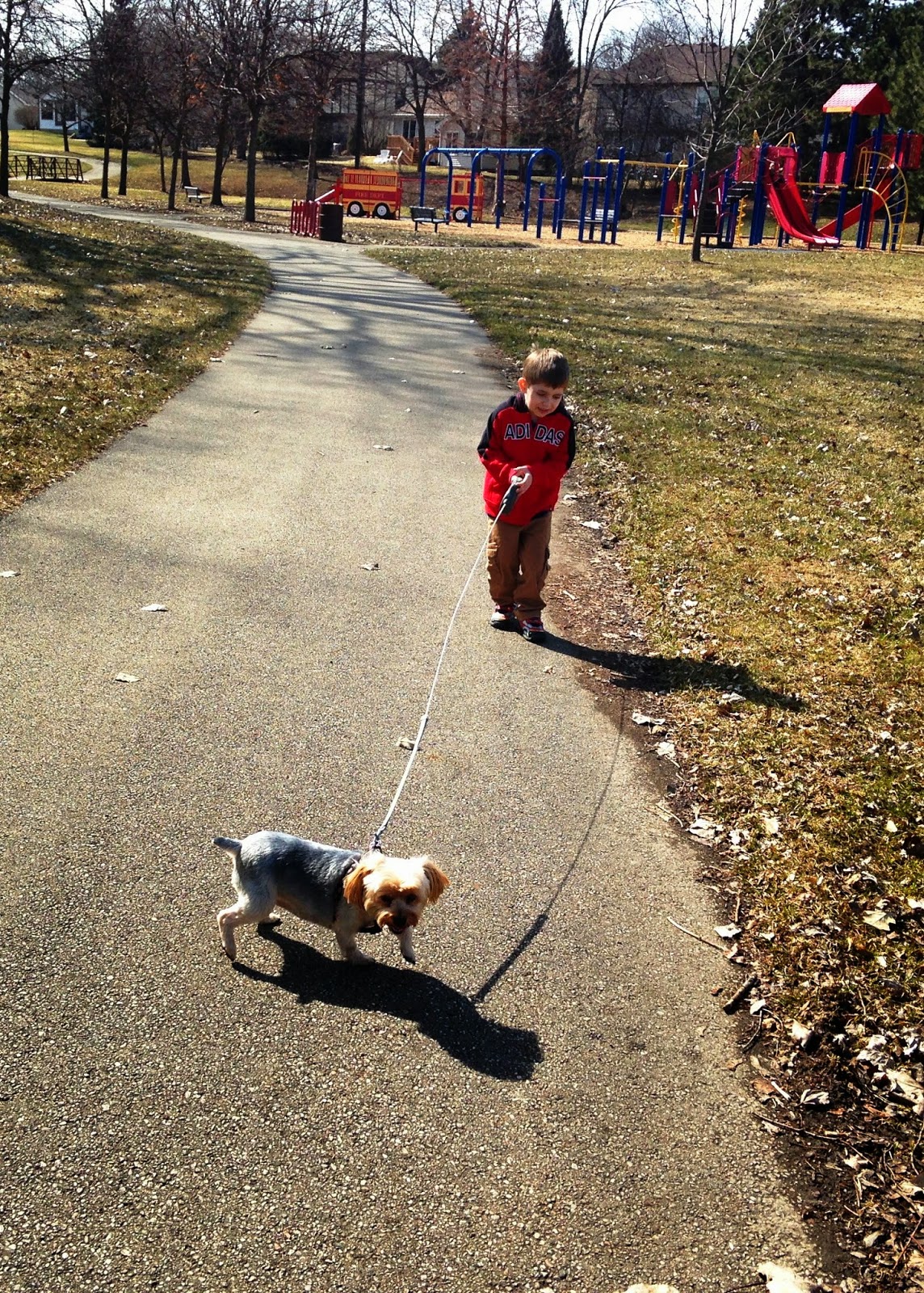 Henry pretended to be tired when we got back to the house, but I think he just wanted to play in Lucy's doggie bed. 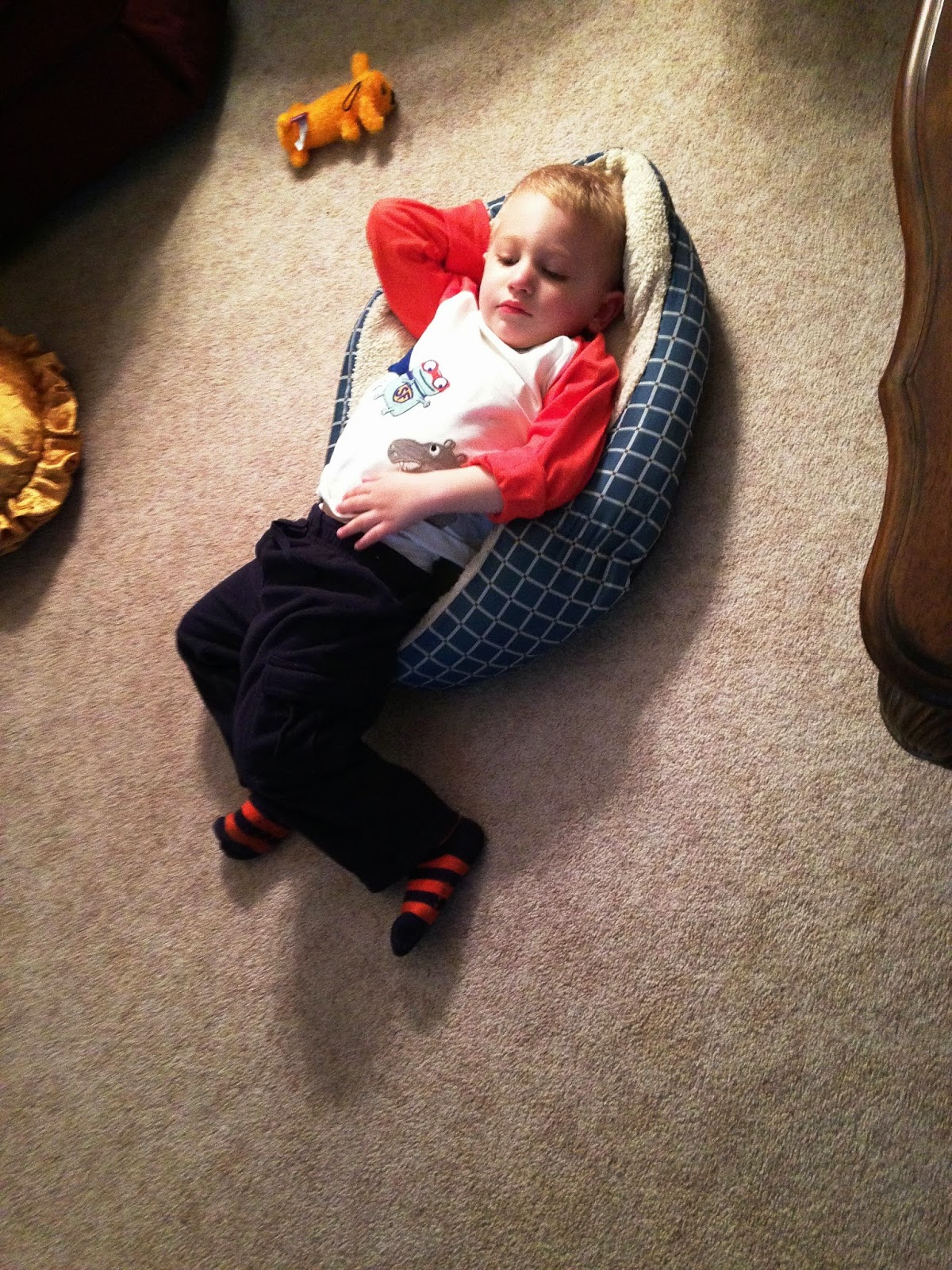 Lucy was not pleased to see a toddler-sized occupant in her special bed. Good thing her version of revenge is licking your face until you fall over laughing. 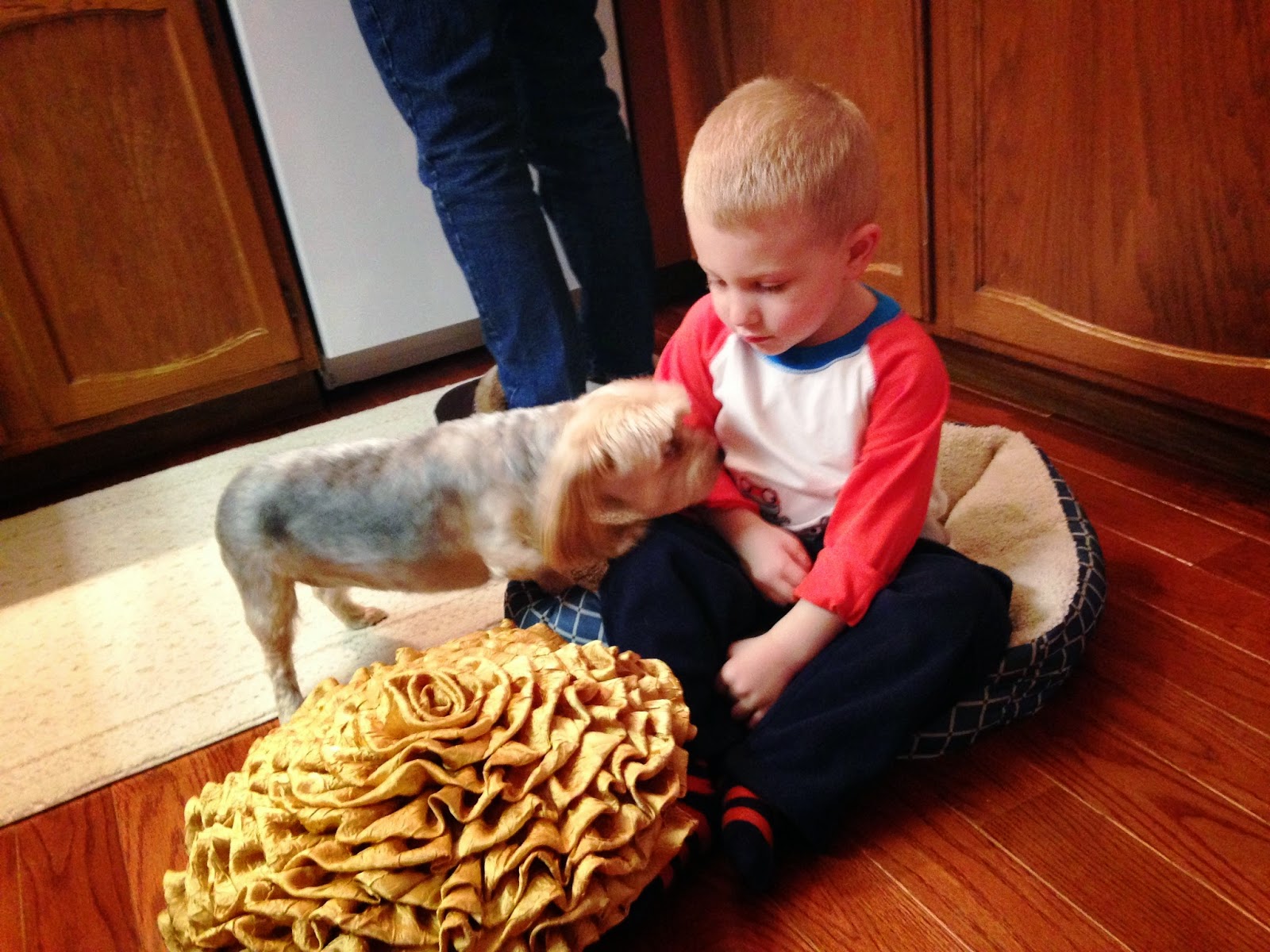 As previously mentioned, GG likes to feed people. She's always offering treats and yummy snacks. I can remember loving visiting my grandparents when I was a kid, because there would always be yummy things to eat. This trend has continued, and Nick and Henry ate pretty much all day. They ate cheesy poufs, chocolate chip cookies, applesauce, and whatever was in the candy bowl. Nick was so full he had to snuggle with Lucy and rest. But only for a minute, and then they were dancing. 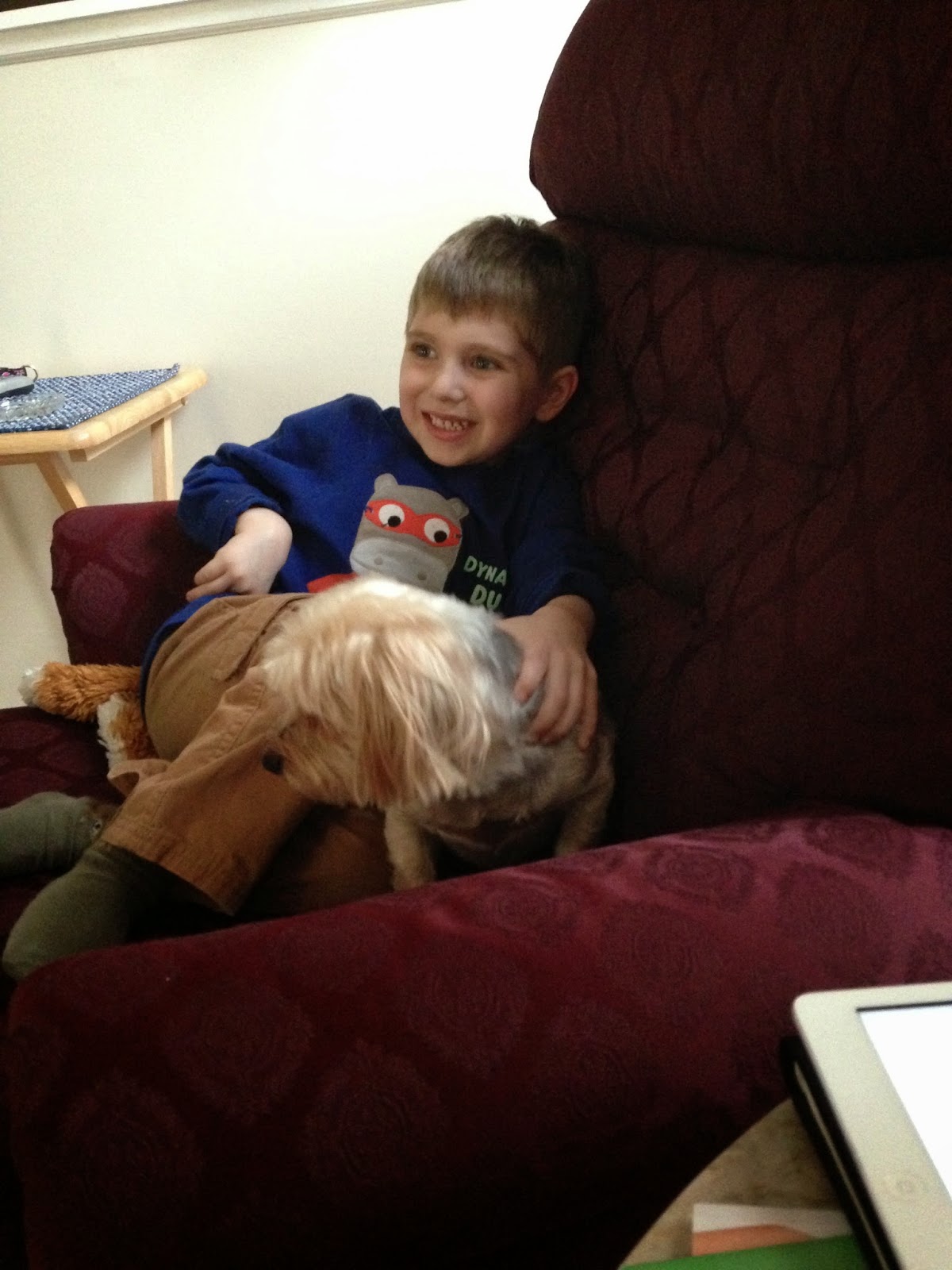 Most of the pictures I took while the boys were dancing are blurry, like this one. I guess that is realistic, considering that my sons seldom sit still. 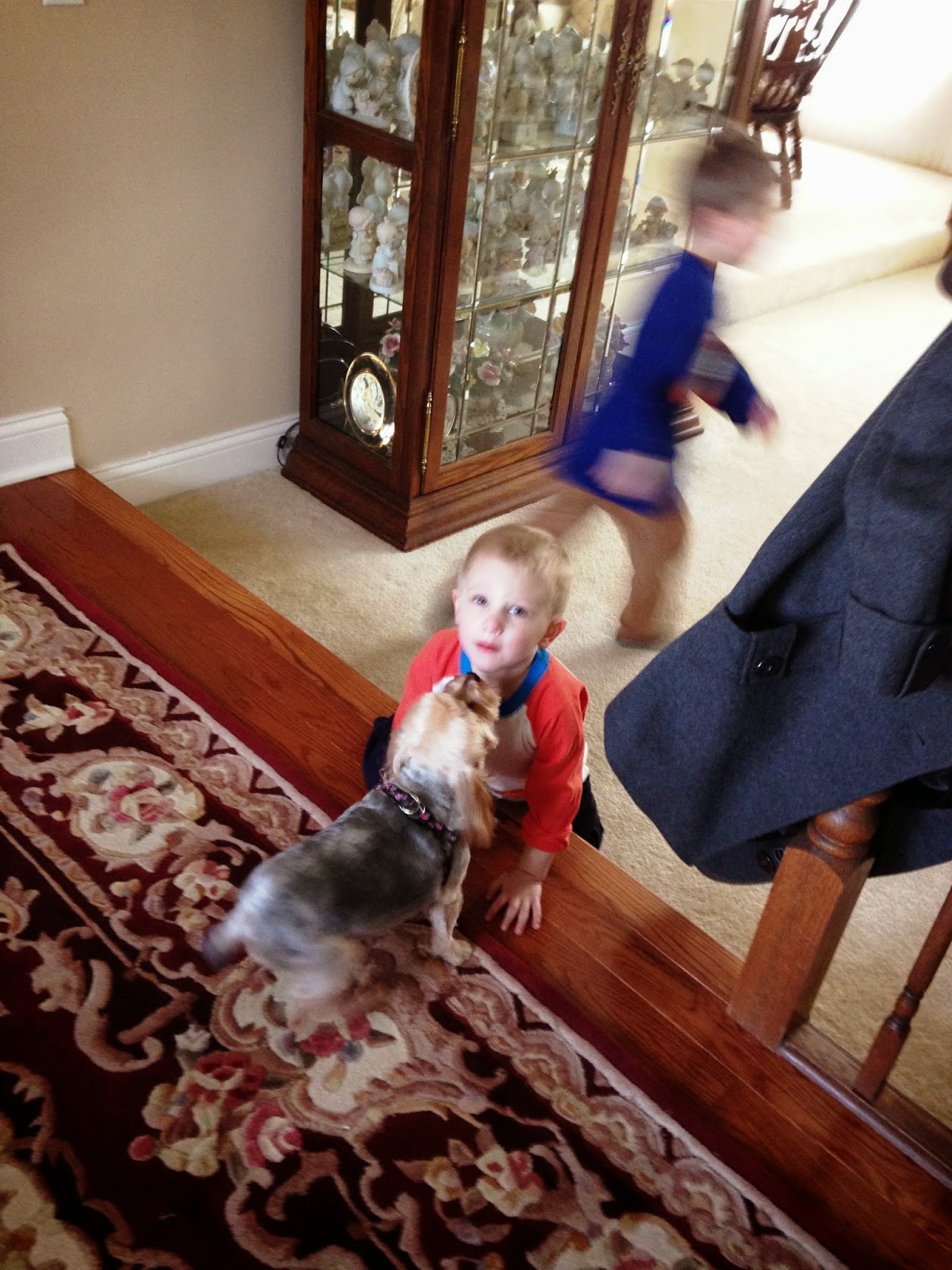 GG played them some dancing music, and they got a kick out of the "stages" made by the steps down into the living room. I take no credit for these magnificent moves--they must get their dancing tricks from their daddy.

While we were visiting, GG and I played with her new ipad. I was surprised at how quickly she has adapted to tablets, apps, and the Internet in general. 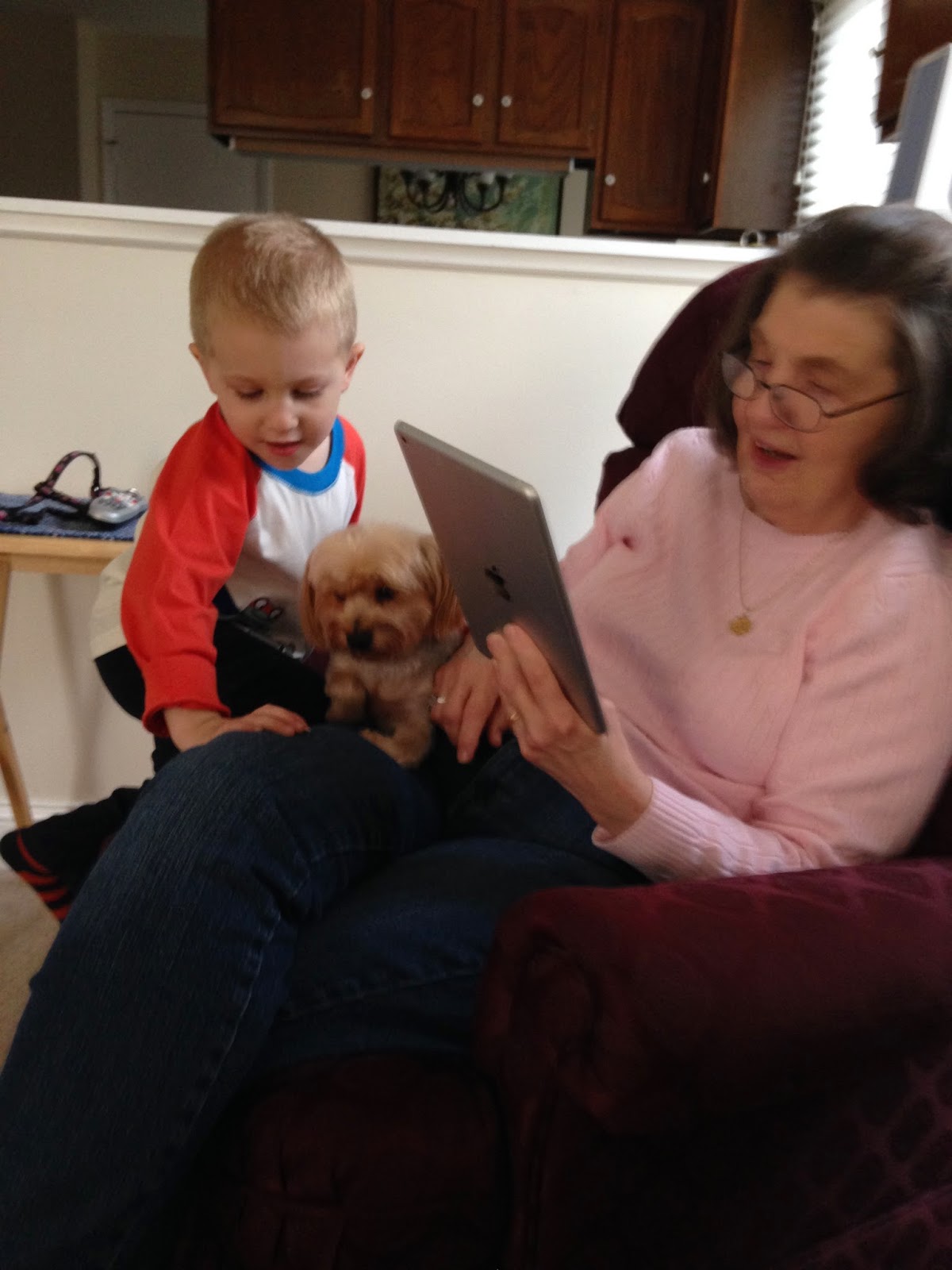 I think learning new things must keep you young. After all, how many great-grandmas can use Facebook and Pinterest? Henry and Nick's GG can!
Posted by Melissa E. at 3:18 PM