What can one do with two small children on a snowy Saturday? Plenty, I guess. Here's our take on my day with the boys and how Henry, Nick, and I occupied ourselves during a snowstorm. (Note: this post is actually about last Saturday, when temps were warmer and keeping my kids outside for hours was reasonable. Today we stayed inside.) 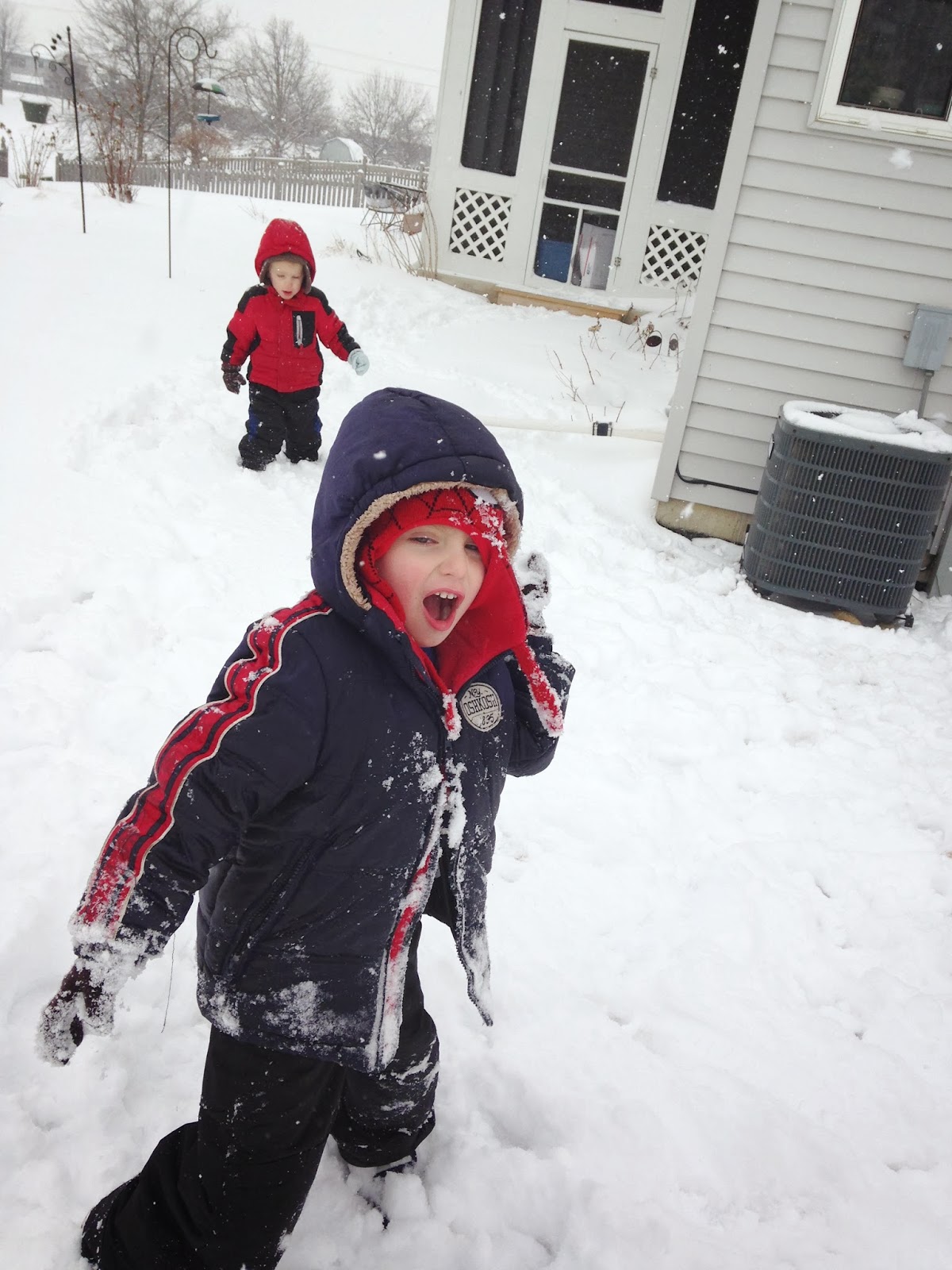 I fortified them first with some snowman french toast. This was devoured eagerly by both boys, especially since I added a "snow layer" of whipped cream to dip the french toast pieces. 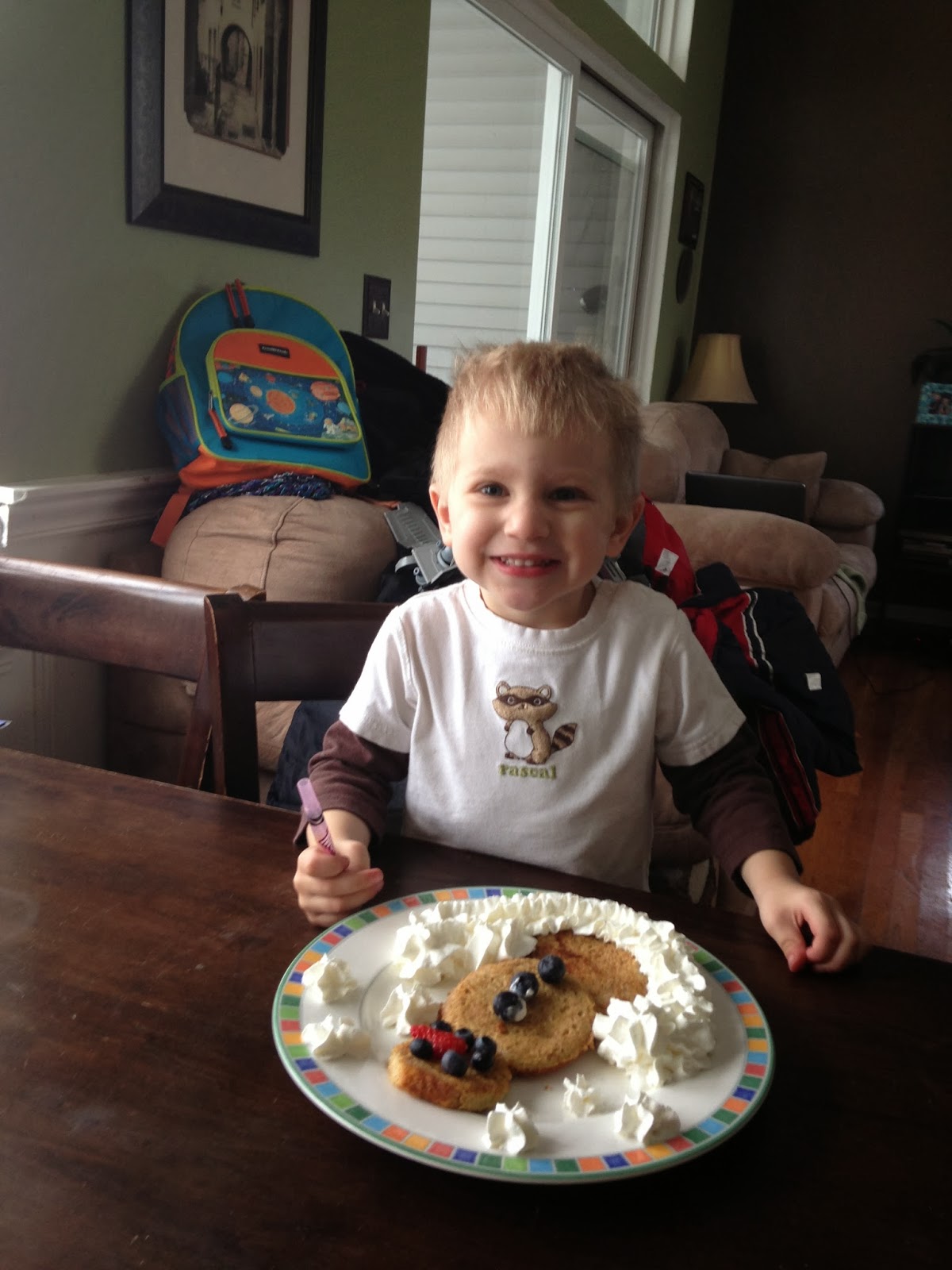 When you're going out into a snowstorm (intentionally), it makes sense to have a pretty hearty breakfast. 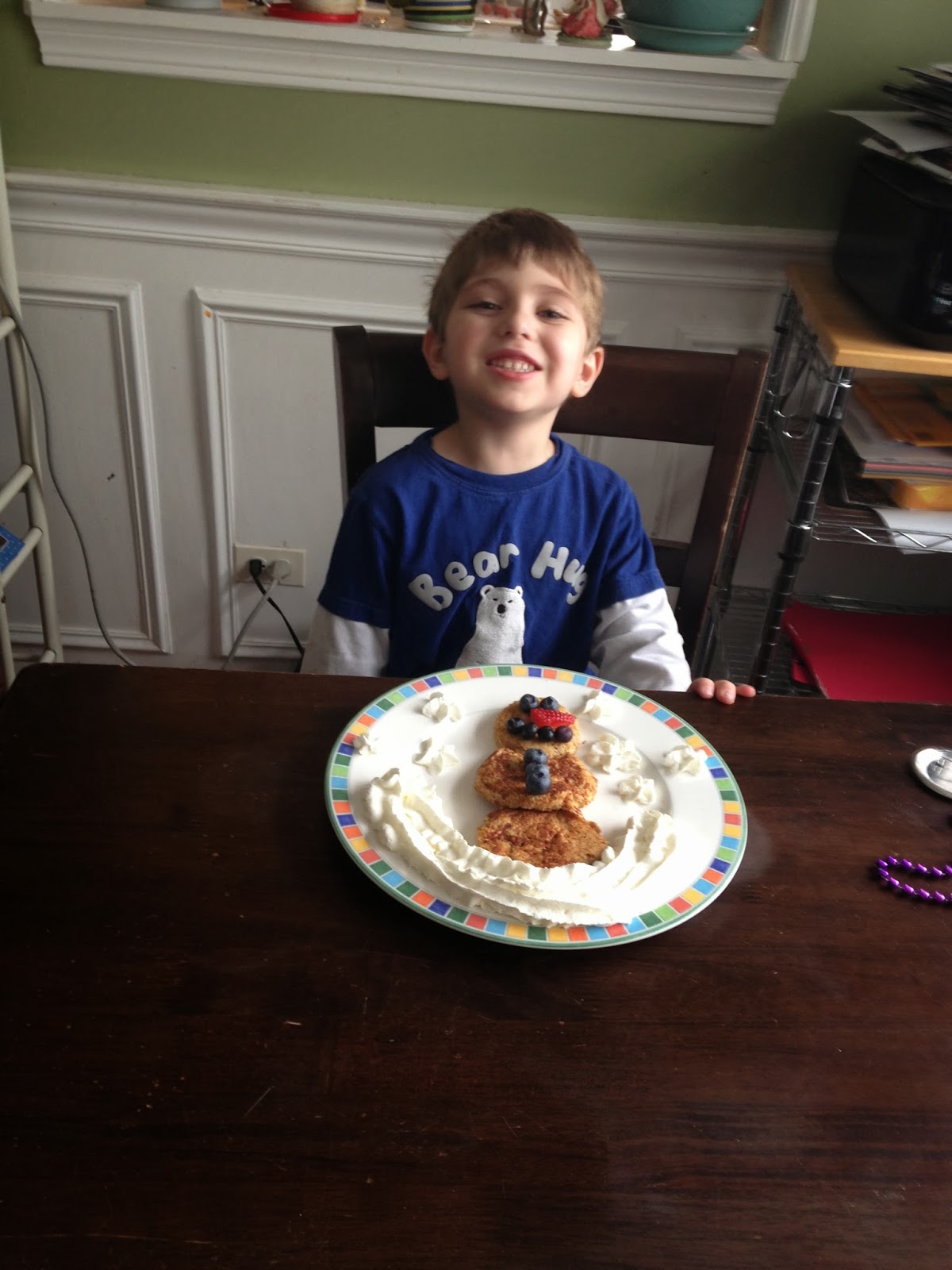 There was a lot of shoveling to do, and I definitely needed some help, though I wasn't sure about the likely success of trying to shovel with two small children.

First of all, I put the boys to work. I wanted to get the sidewalk and driveway clean for Grandma Toni's arrival, so I got out the kiddie shovels and told Nick to get busy. Not too shabby for a preschooler, right? 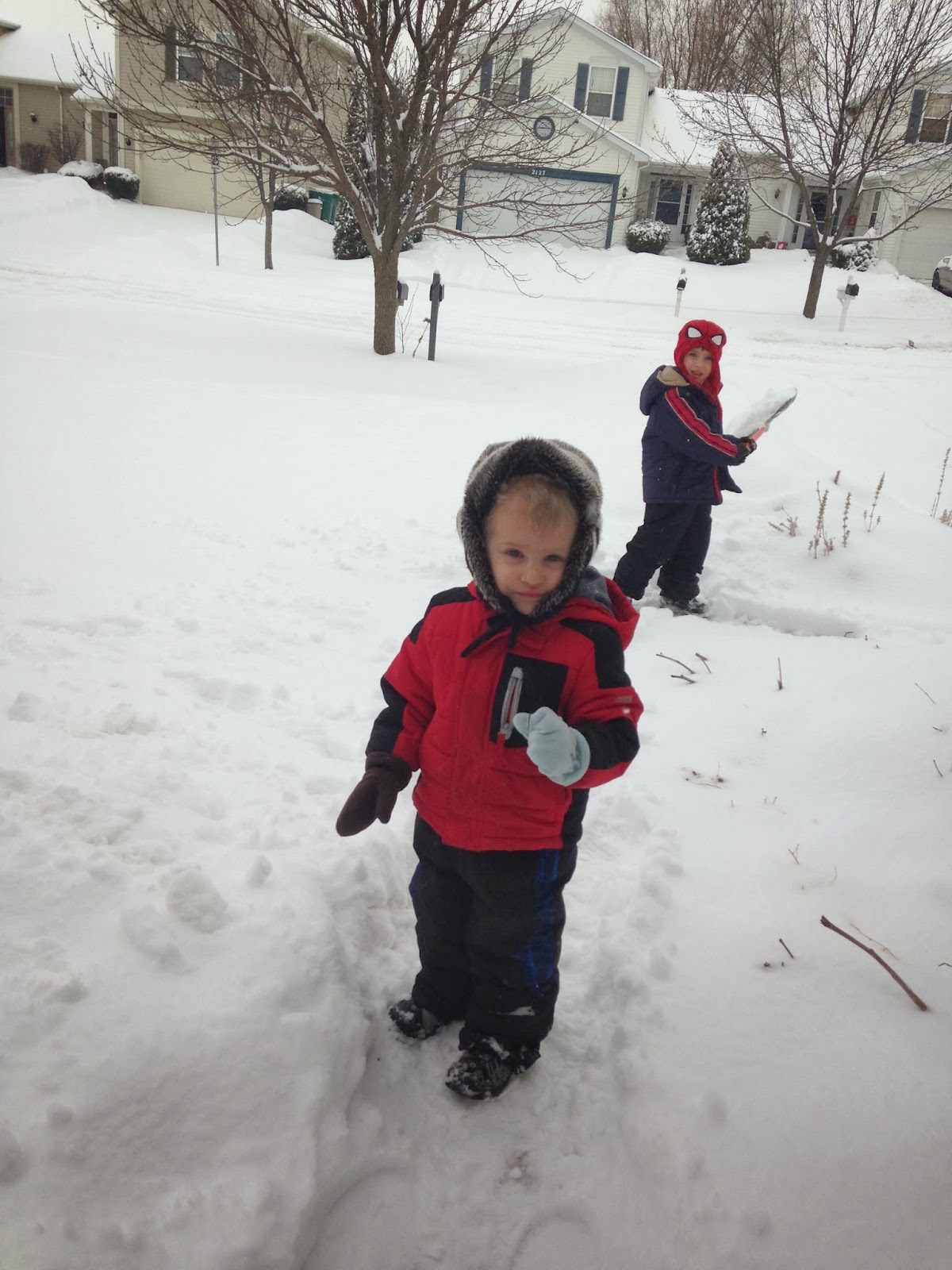 Henry wasn't quite as much help. He mostly just complained about the cold, took his mittens on and off, and kicked snow around. Henry was happiest when we buried him in snow. 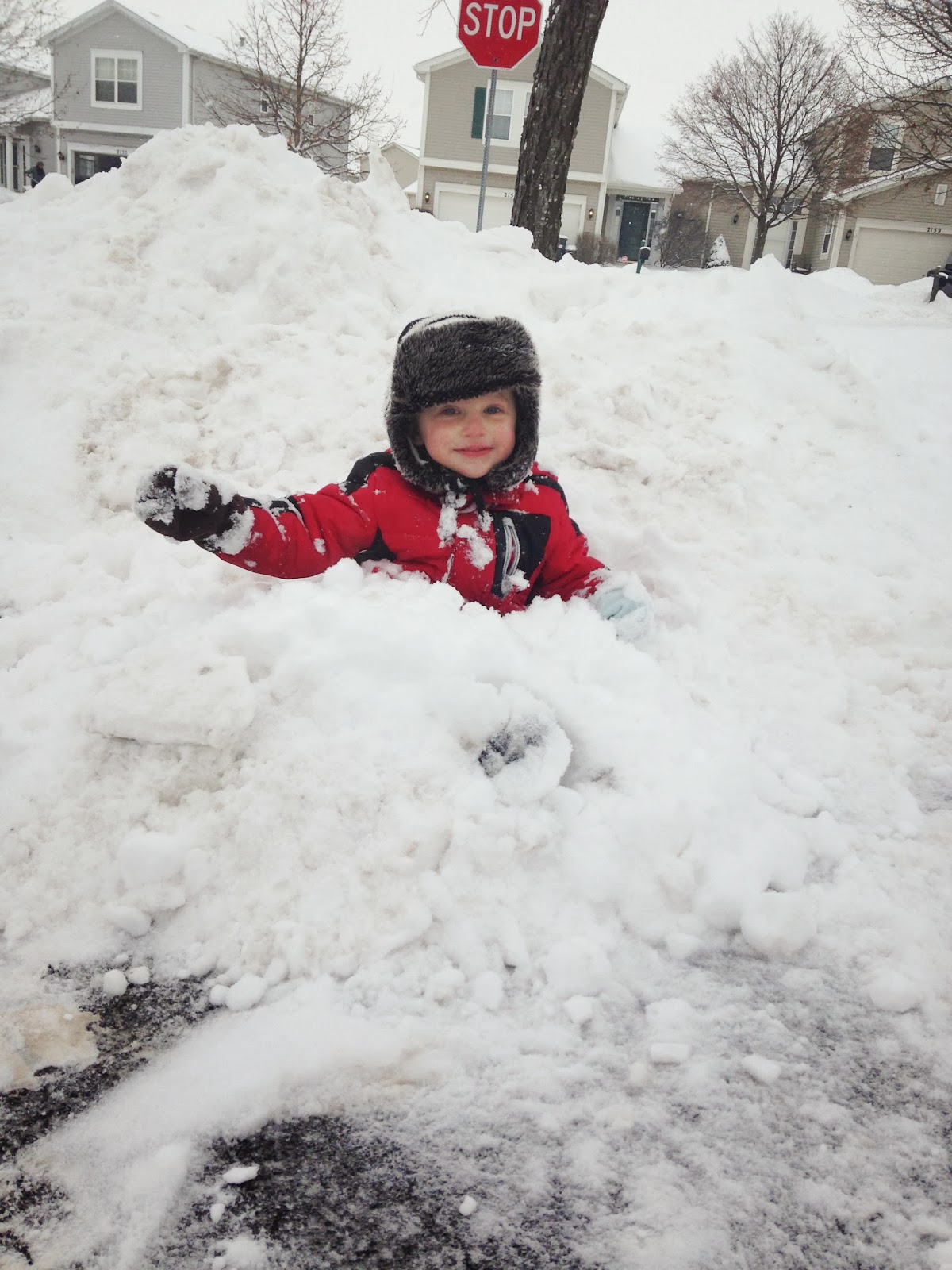 To be fair, Henry did pick up a shovel and give it a try, but his stamina and attention span weren't quite there. Nick was actually helpful, though I had to keep nagging him to keep shoveling and get out of the snow piles. He liked being buried, too. 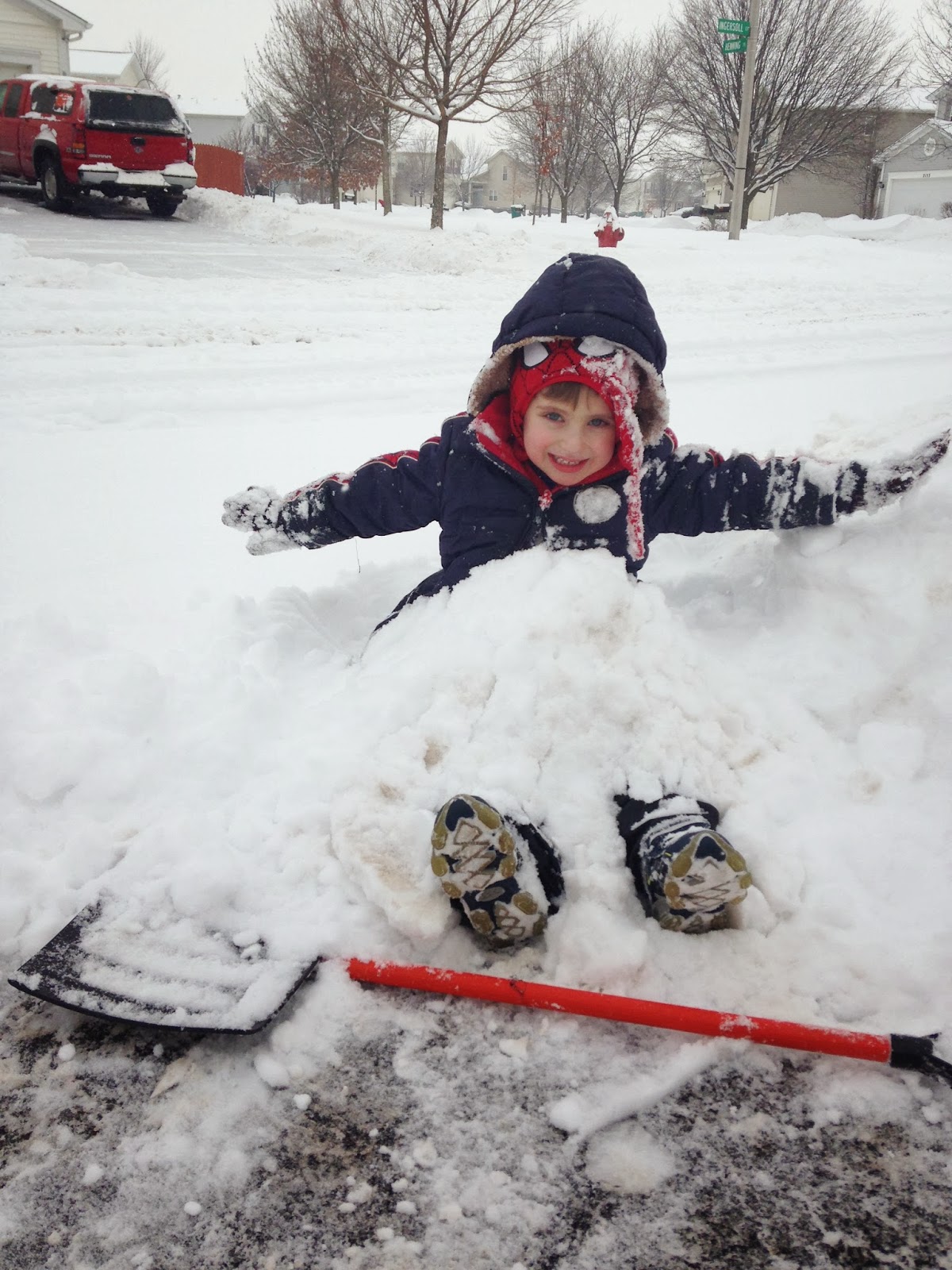 They did a nice job, I think, though I probably did at least 60% of the work. 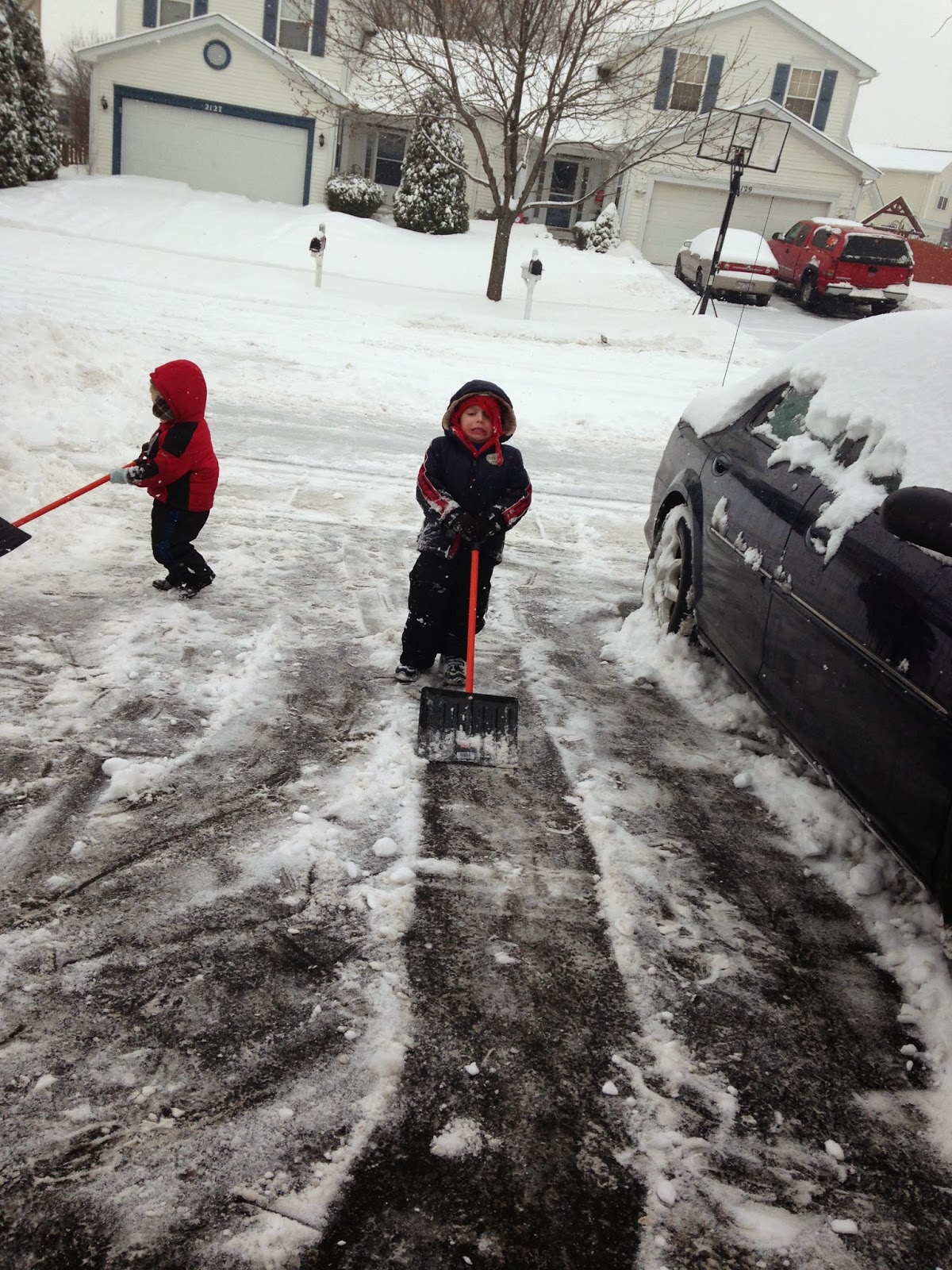 After our shoveling extravaganza, we decided to have a snowball fight. Hey, I had promised, despite the fact that I didn't realize it'd take me an hour and a half to shovel and then by the time I was done shoveling, the front of the driveway was already covered with snow again.


The only problem is that anytime one of my sons was actually hit with any snowballs, however lightly, screaming and crying ensued. I let them hit me for awhile, since I don't mind a snowball injury. 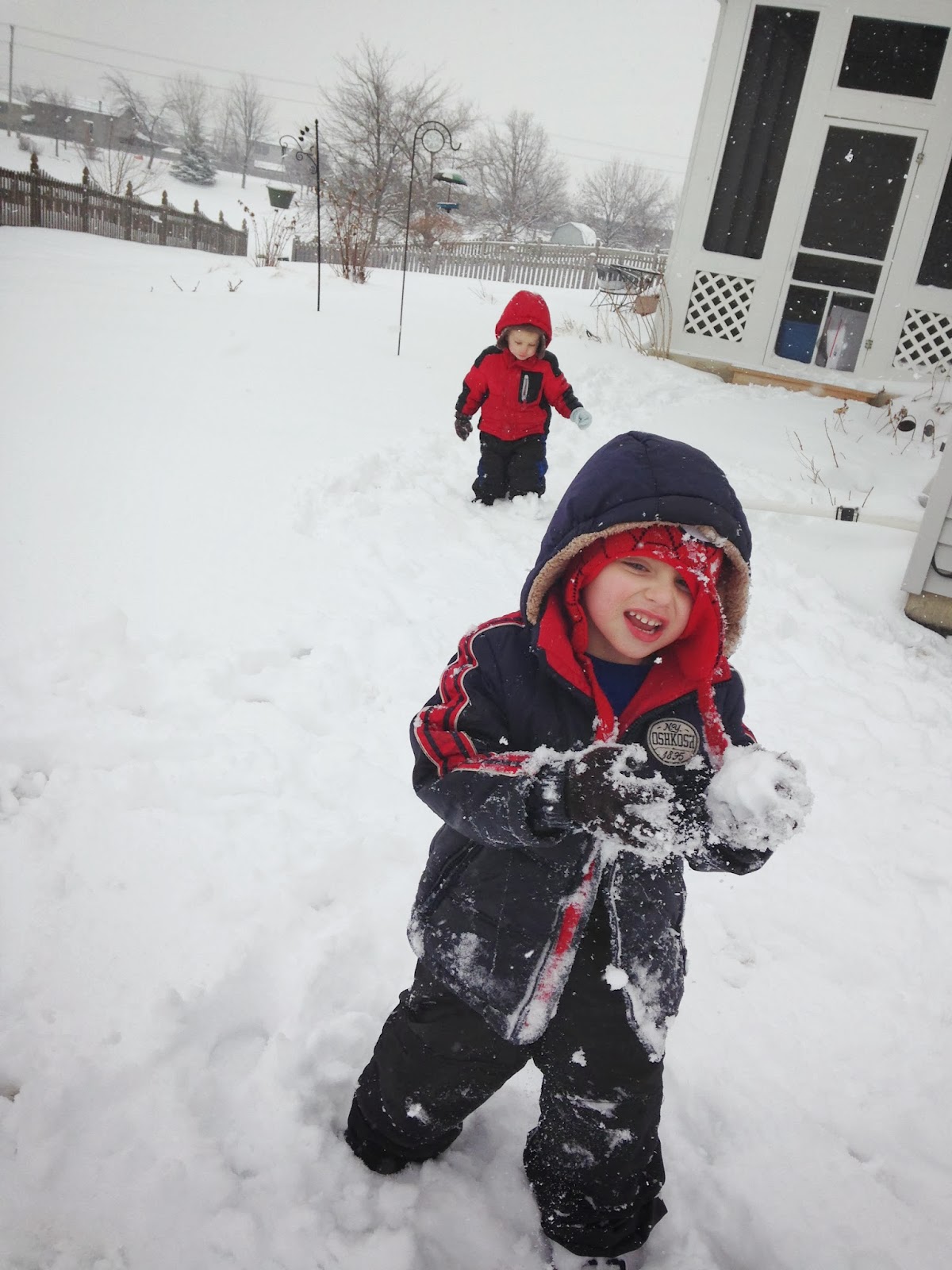 So I came up with a compromise game: throw snowballs at the side of our house. Much less complicated, and they could leave marks. 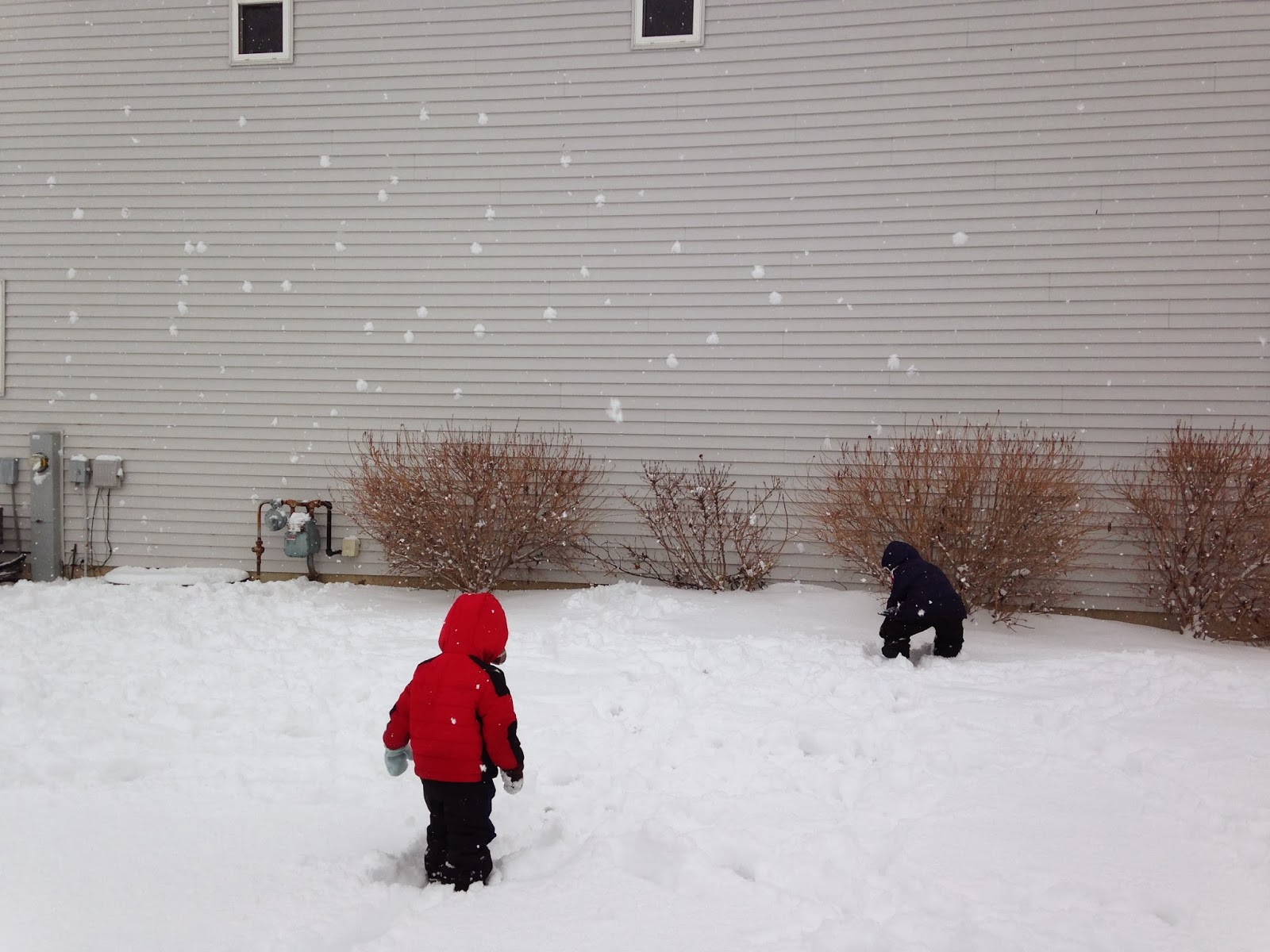 They got pretty good at this, though I'll admit I aimed quite a few of those snowballs myself. Thank goodness it was a warmer winter day, so we didn't get too cold.

Oh, and yes, Nick actually did put a snowball in the freezer. I found it the other day and it made me laugh. We also had hot chocolate with whipped cream (we were out of marshmallows). Yum. 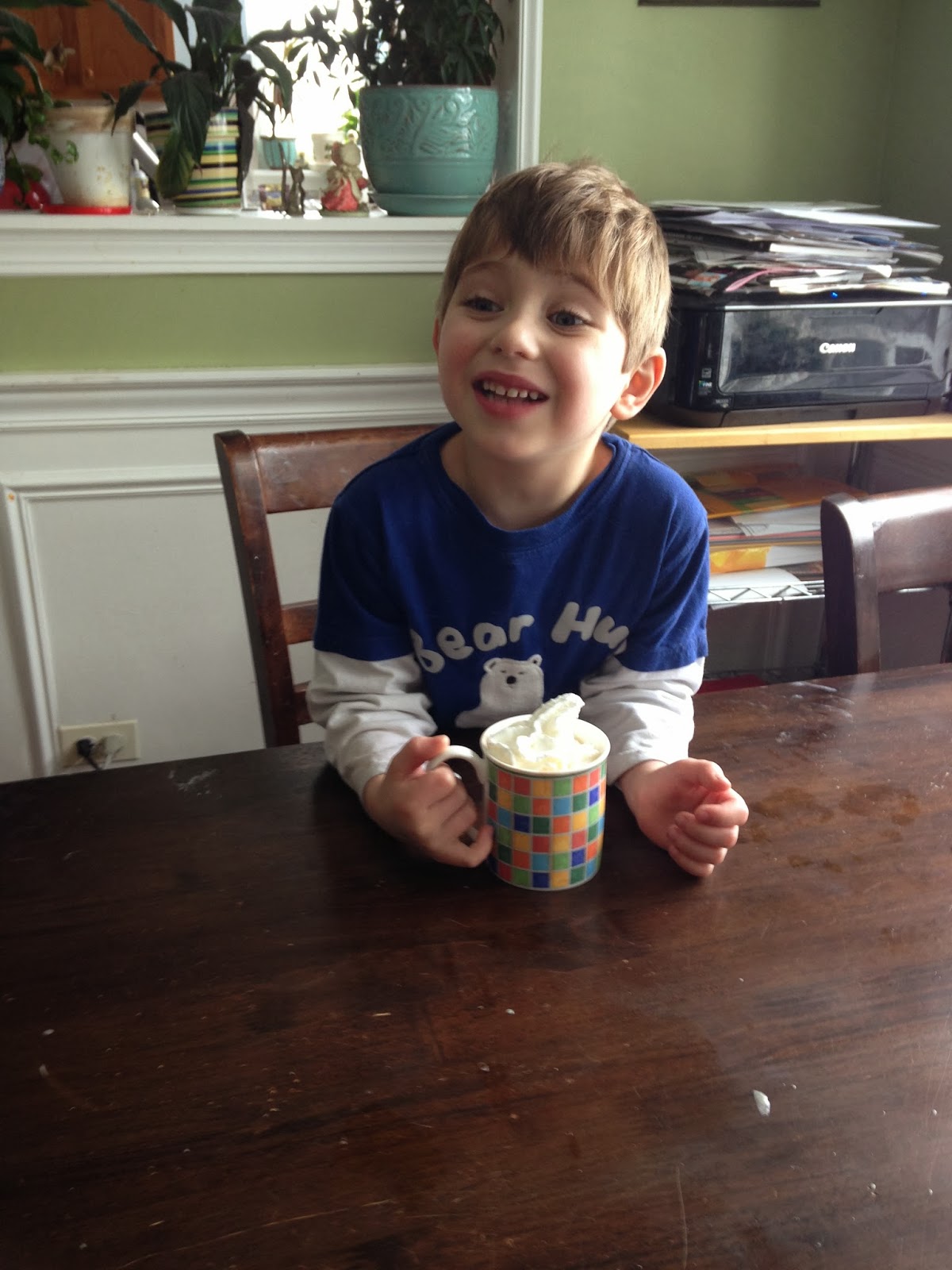 There's nothing like homemade hot chocolate, made on the stove with Ghiardelli dark chocolate and real milk. Yum. 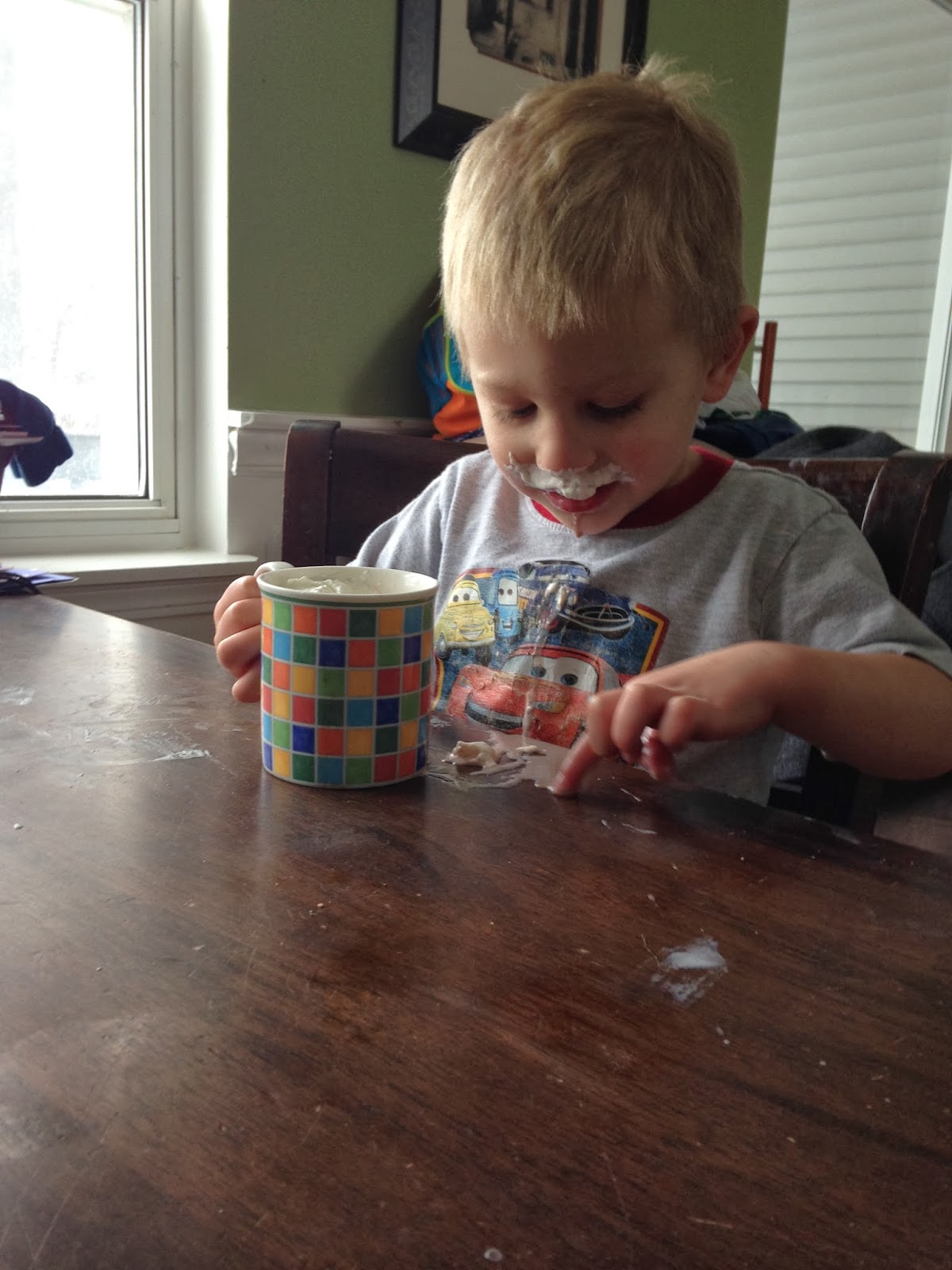 I might be sick of winter and snow, but last Saturday had some pretty good wintertime memories, too.