A Visit With Santa, or Why Parents Should Plan These Things Better

I blame myself. Typically, I've taken the kids to see Santa earlier in the season, on a day when the crowds were fairly thin. Waiting in line is no fun for little boys aged two and five. We've been just a little bit overwhelmed since Henry's surgery and somehow missed the Santa visit until the last minute. In fact, for the first time since I can remember, I didn't even start Christmas shopping until the weekend before Christmas. 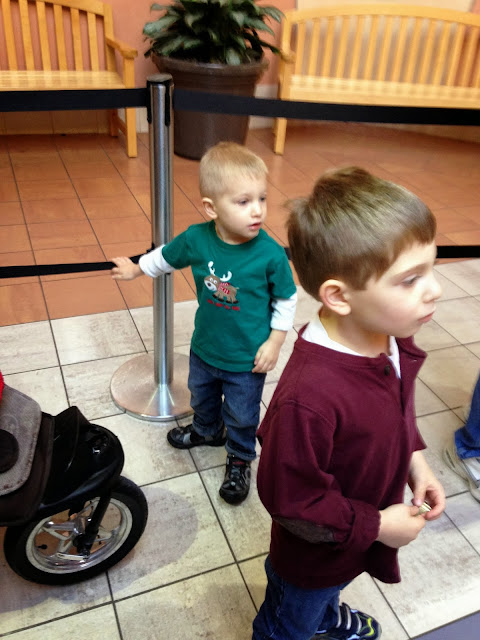 (Here's there Santa pics from 2009, 2010, 2011, and 2012). I had the boys at Yorktown on Saturday, which sucked any holiday feelings from my soul due to the large crowds and the 45 minute wait for parking. I wasn't going to brave the Santa line then. Greg had tried on Sunday, but the wait was a minimum of two hours, so he gave up. Can you blame him? He took the boys for haircuts and to the mall shopping the Sunday before Christmas. Anyhow, we went first thing Monday morning, when Santa was still adjusting his beard.


Our line was much shorter, and we only had to wait about ten minutes.

When we finally got to see Santa, Henry was just a bit hesitant. Can you blame him? Climbing on some strange bearded man's lap does seem questionable, when you think about it. Finally he snuggled a bit and we got our Santa picture.

After our Santa visit, we went to Panera for some yummy cookies. Nick chose Red Velvet (He takes after his Grandma Toni--that's her favorite, too) and Henry chose an M & M cookie larger than his head. 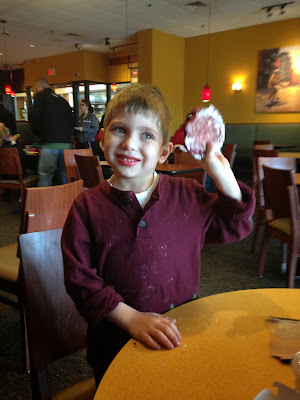 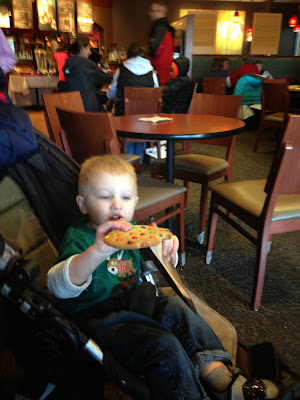 In addition to our lack of planning regarding Christmas shopping and Santa visits, none of us thought to wrap any presents until the night of the 23rd. Hindsight is 20/20, but the night before Christmas Eve was quite insane. Henry loved the wrapping paper tubes, and I gave up trying to get them away from him.

The only thing that made my four-hour paper-wrapping extravaganza even more fun was waking up Christmas Eve morning to find out that Henry had woken up early and unwrapped half of the presents. Aren't two-year-olds wonderful? 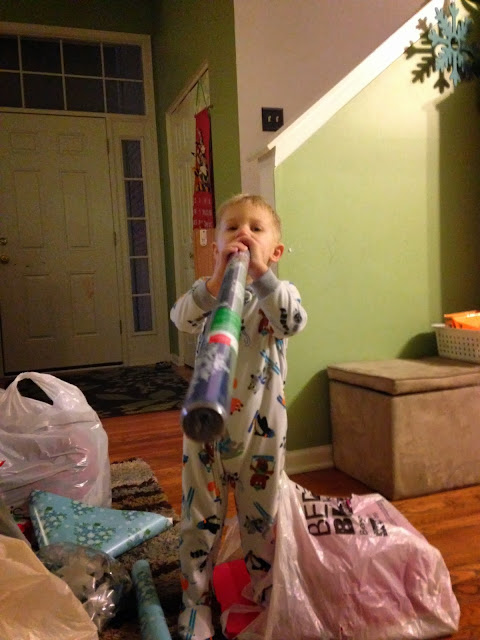