I think, perhaps, that there is a reason Henry is growing so fast. The boys have breakfast around seven, and Henry eats his own food and then waits for Nick to get bored and go play. Then, he surreptitiously crawls under the table and onto Nick's chair, where he chows down on whatever Nick didn't finish.

This is what happened on a particular day when the boys had greek yogurt, sliced cherries, and whole-wheat bread with Nutella spread. Henry decided to paint the entire table with the yogurt. I wasn't sure whether to laugh or cry. I asked, "Did you do this, Henry?" He said "No!" but the Nutella around his lips and the yogurt on his fingers clearly marked him as the guilty party.

I gave up and laughed (and grabbed the camera) when I saw how Henry had flung the cherries all over. He got a very firm, "No throw!" and a time out, but I do not think he felt very guilty. 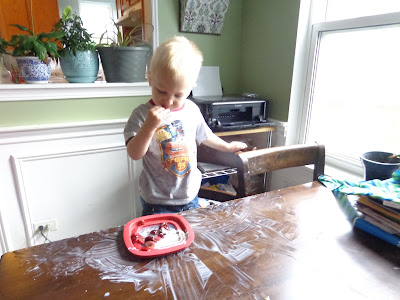 While the painting was a one-time event (hopefully), the sneaking off with Nick's leftover breakfast is a common occurrence in our home. I have no idea where this child puts all the food he consumes. Ah, well. I think I'd rather have a problem like this than picky eaters. Besides, perhaps this is a sign of an early interest in the arts. You never know.
Posted by Melissa E. at 9:22 PM