As a parent, I've always been lucky because, with few exceptions, both of my boys sleep well. We've been pretty consistent with nap times and bedtimes, and have reaped the benefits of having children who sleep through the night. There are many things that my children do not do easily, but they have the sleeping part down pretty well. 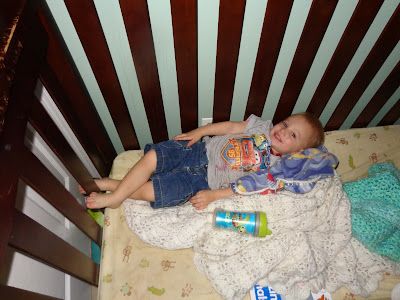 Henry doesn't sleep quite as deeply as Nick, and he sometimes takes a little while to settle down, but by 8:30ish on most nights, both boys are snoozing. Grandma Toni recently bought us some new curtains recommended by sleep specialists because they block out light. Nick loves them! 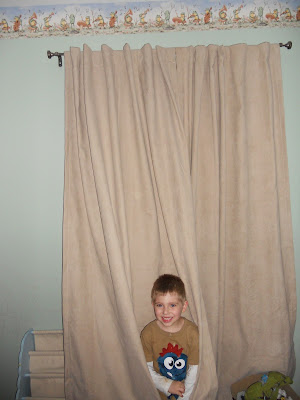 Nick must always have his menagerie in residence with him, and he has been known to cause trouble during naptime, but at night, he sleeps. 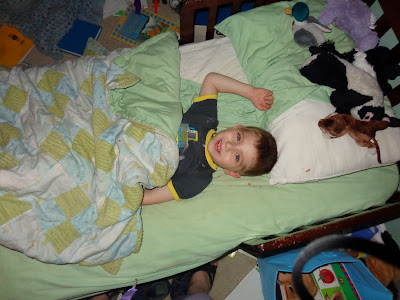 Recently, though, Henry figured out how to escape his crib. Nick didn't figure it out until 28 months, and Henry is only 24 (as of next Sunday). However, Henry is definitely not ready to be out of his crib. Greg figured out a solution that I think is quite ingenious, if not necessarily the most attractive furniture option for the nursery. 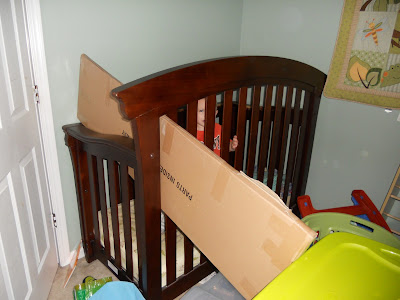 First, he turned the crib backwards so that the short end is against the wall. Do you see him peeking between the bars? Then, Greg laid the bed frame pieces (which will eventually turn this crib into a full-sized bed) across one side to form a barrier. The bed frame is propped up by some plastic boxes filled with out of season clothes. 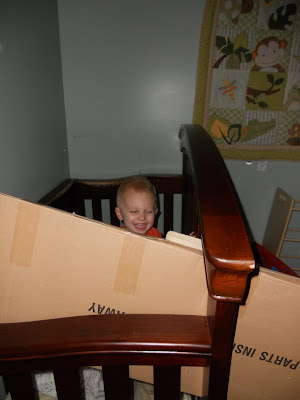 Henry always tries to get out by climbing over the cardboard box, but he lacks the upper body strength, at least right now.

Henry is not pleased with the arrangement, but he can't really do anything about it. He is, effectively, trapped. After whining a bit, he settled down to rest with his good buddy Elmo, whom he refers to as "Melmo." 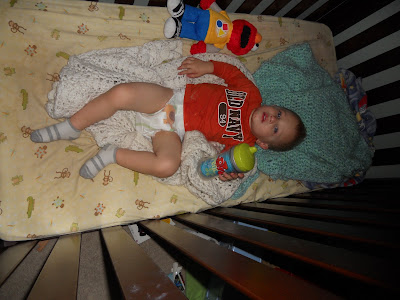 Nick thinks it is funny that Henry can't get out anymore. I halfheartedly wish that I could put Nick back into a crib so he couldn't get up so darned early. Oh, and yes, that is a plastic banana in his bed. I believe he has it there for protection. He uses it as a light saber. 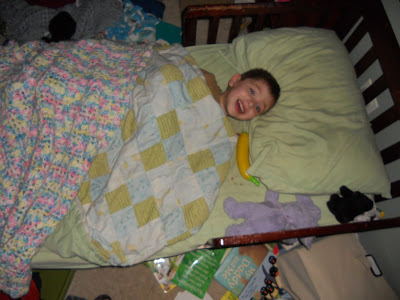 My boys both have their own bedtime peculiarities, that's for sure.