What can I say about Monkey Joe's?

Since I teach right on the Naperville/Aurora border, I've been hearing about Monkey Joe's for quite some time. My students often write about it in their journals. They describe it as a sort of heaven on earth for kids. 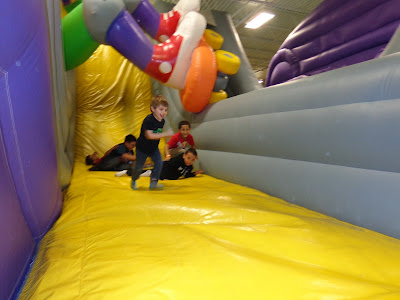 Nick would agree with that assessment. We went last Saturday with my friend Lynn and her son Aidan. From the time we walked in until the moment we left, Nick didn't stop moving. Henry climbed around a lot, too, as did their friend Aidan, but Nick took the cake for running and jumping and yelling. 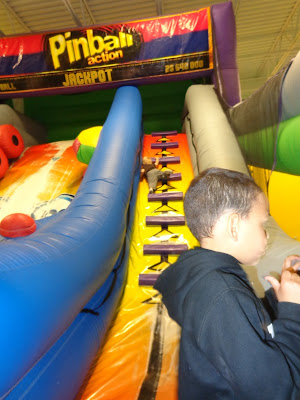 I was initially a little worried about Henry climbing so high, but he refused to stick to the "Three and Under" bouncy places. He wanted to climb the big time slides, and indeed he did. Henry likes to slide down feet first, on his tummy. A number of people commented to me about how well he was climbing for such a little guy. He never seemed to get scared or intimidated.

We had initially planned on spending an hour or two here, but before we knew it, time had flown and there was no signs of flagging interest in bouncy-related things.


Henry impressed me with his climbing abilities, and it must've given him practice because. . . . wait for it. . . . Henry can now climb out of his crib without assistance. Sigh. 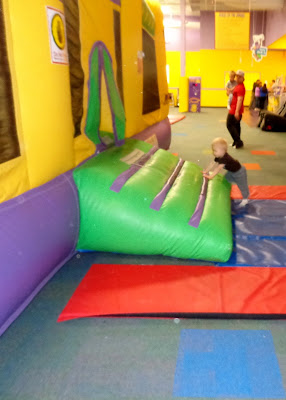 I tried to teach the kids how to play Skee-Ball, but I don't think they quite "got it." Nick wanted to keep as many balls as possible, so he grabbed them all. Henry tried to throw them overhand, which can be quite dangerous. 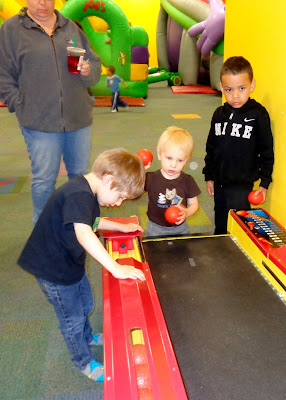 I have to say, though, this wasn't a bad way to spend a Saturday evening. The boys ran out all of their energy, and I got some time for girl-chatting. I must be psychic, because I see the future and many bouncy-houses are in it. 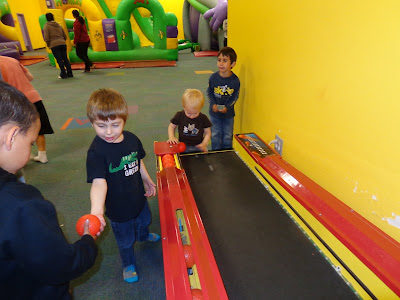 This week, Nick has started every morning by asking me "Mommy, are we going to a bouncy house today?" Then he interrogates me about when the next bouncy-house visit will be and for how long his bouncing will commence. I don't remember these types of places existing when I was a child, but I can tell you my kids absolutely adore them.
Posted by Melissa E. at 8:19 PM