I'm joking, of course, when I call my boys high-maintenance. They could care less if one of them is wearing a dirty shirt or another one has yogurt in his hair. Heck, anytime they're wearing clothing that matches, I consider it a win. My rough-and-tumble boys nearly always have dirt or a bruise somewhere, even if I give them a bath everyday. Nick also likes to undress and redress himself during naptime lately, and has come up with some interesting combos.

But I think I waited a bit too long between haircuts. See what I mean? 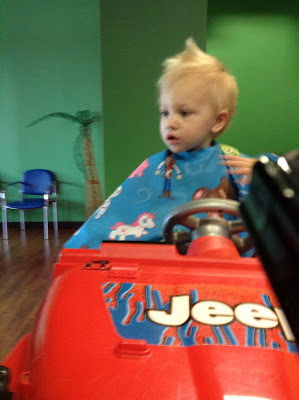 Henry has perhaps the weirdest baby hair I've ever seen. He stayed bald for the longest time, and then his hair grew in wispy and almost white. It also grew in the exact reverse pattern of male pattern baldness. Looking down on his head, the hair forms a "v" with bald spots on either side. His hair also sticks up quite a bit. I am hoping that it isn't growing in the way it will fall out in his twenties or thirties.  ;) 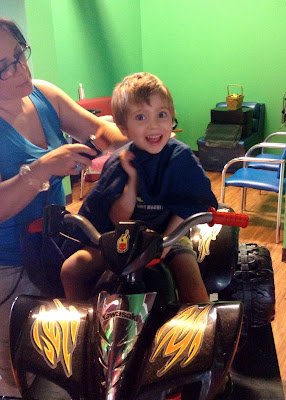 I adore this picture of Nick because this was a genuine smile, even if his hair was incredibly shaggy. Nick's hair was a darker shade of blonde, and it grew in curly and then has gotten straighter and darker as he got older. No appearance of balding for him, though he has a cowlick in the back that is nearly as stubborn as he is--I'm not surprised. 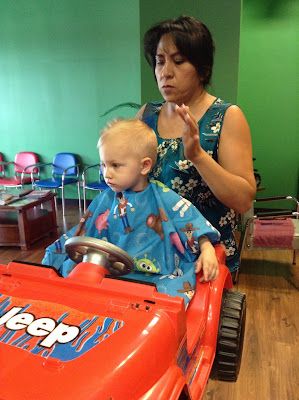 This afternoon I took the boys to Safari Snips, a kids' haircut place in Naperville. I like to take them to new places because novelty often entertains them. Plus, this place was right on my way home. I didn't ask for specific haircuts, just "little boy" cuts that would be good for summer. Henry doesn't look too pleased with his, but I think that is because he hated the gown he had to wear. 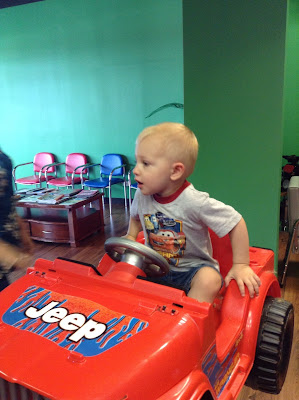 I've been to places like this before, and while this place was the largest with the "coolest" toys, it was also the priciest. In addition, the haircuts took less than ten minutes. I didn't actually have a problem with the actual cuts, I guess I just like to get a little bit of advice on what would look best. 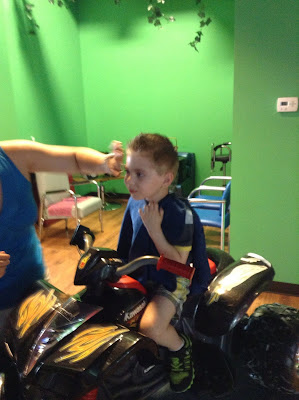 Nick adored riding the little ATV they had instead of a barber chair. He did not, however, sit still well for the clippers or the scissors, though the stylist was patient. Nick did like how they spiked his hair at the end, though he would've preferred the "faux-hawk" that he got last time. I think I liked his last haircut better, too, though I know this shorter cut will be good for summer. 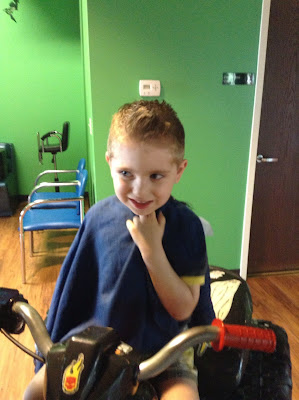 I had to practically drag Henry out of this Lightning McQueen car. He doesn't say many words, but "Queen!" is one of them. He was even petting the car at one point. 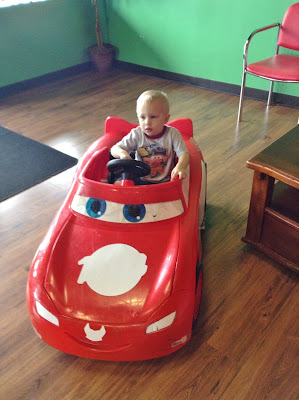 Boy hair is pretty simple to deal with, so I guess I should be glad this trip was so quick. I guess I'm just a little disappointed that it was less of an "experience" for the price I paid. The boys did love the toys, but the atmosphere wasn't as fun as I would've liked.
Posted by Melissa E. at 9:09 PM