Update: The Naked and $75 Method of Potty Training

We have been working on getting Nick potty trained for a year and a half. No, really. It isn't that Nick cannot go on the potty, it's more that he has figured out that we cannot force him to use the potty. He is stubborn. 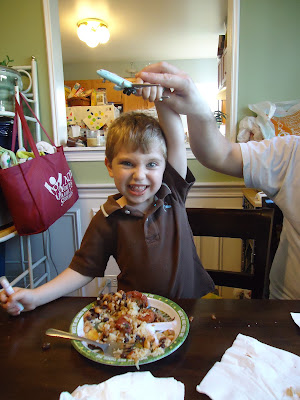 Yesterday I promised to reveal why Nick's pictures haven't been appearing on my blog as often. It's a simple reason. We've been trying a new potty training method. It's called the "Naked and $75 Method." Several people I know at work recommended it, and I'm willing to try anything at this point. Hey, I'd stand on my head and sing Yankee Doodle if I thought it would make a difference. (The $75 is for the inevitable carpet cleaning that will result from this method.) Naked means that I wasn't taking many pictures of my older son.

So does this method work? Actually, yes, to some extent. Last weekend I took away Nick's pants privileges. He was naked from the waist down most of the time from Friday night through Monday evening. Surprisingly, he went in the potty more than he has in the last two months combined, just in the first day. Nick also had his first #2 in the potty ever. This was a truly exciting moment. 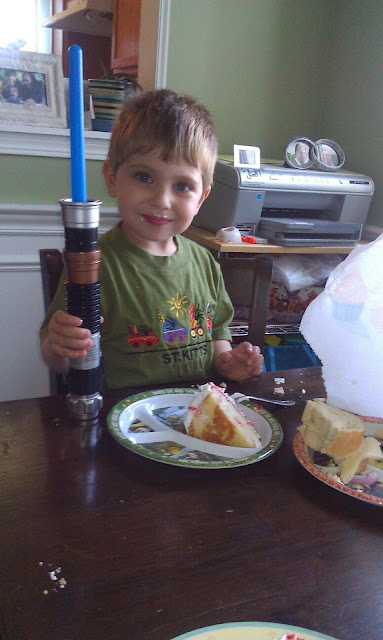 Not only did I buy Nick his promised reward of a Star Wars light saber, I also bought a cake to celebrate. The cashier at the Meijer asked if it was someone's birthday. I told her, "No, my son just went on the potty for the first time."
"Oh," she replied. "You must have a two year old."
"Nope," I had to clarify. "He is three and a half. We've been waiting for a year and a half for this moment."

Henry liked the cake, even though he didn't really do anything to earn it. Besides being pretty adorable. 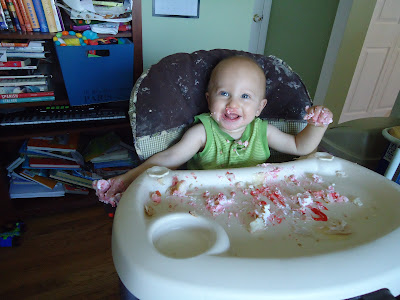 Anyhow, I don't think Greg was quite as consistent with the naked method this week. He felt a little weird having Nick run around outside nude. (I just used a long t-shirt, so he was relatively decent.) We're going to keep trying this method now that I'll be home more for the summer.

Here's our dilemma now: Nick will go in the potty pretty regularly, so long as he is naked. But as soon as we put pants on him, there is an inevitable oops.
Posted by Melissa E. at 8:48 PM