This year we decided to head to downtown Geneva for Father's Day. We'd discovered the beautiful shops on third street when we stayed in Geneva for our anniversary, and decided to come back. 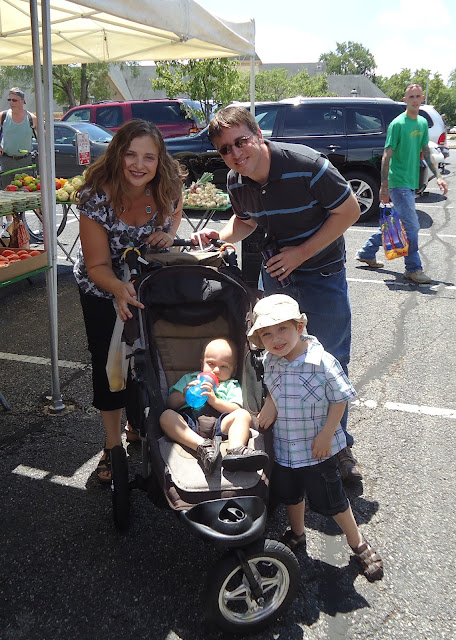 On Sundays, there is a French Market, and we had a hankering for some fresh vegetables. There was a really cool statue down by the train station, and the boys loved letting drips fall on their heads. It was sure hot enough to let them get wet! 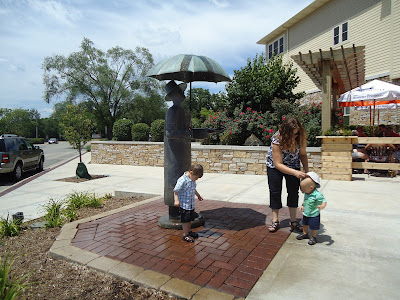 Henry loved the feel of the cold drops on his (nearly) bald head. Nick loved that his hair got all wet as the drops fell from the umbrella. 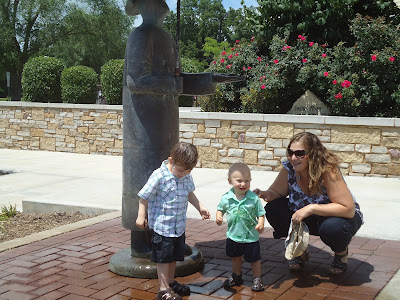 We also had plans for a late lunch with Greg's dad and stepmom, at a place called Wildwood. The restaurant had decent food and pretty good sangria, but I don't think we'll ever be returning. The reason? No changing table in the restrooms. No fun.

Anyhow, it was really nice to see Grandma Linda and Grandpa Jay and catch up. Nick was fascinated by the trains, and Grandpa Jay had lots to tell him about the freight trains we saw while we were near the train station. Nick loves anything that moves, especially trains. He was a little disappointed that we couldn't ride on a train. We told him, "Maybe another time." 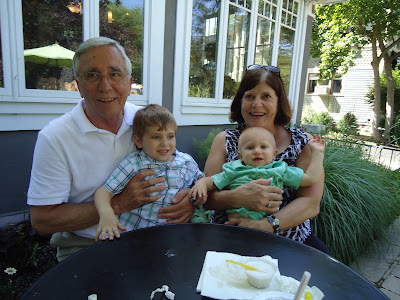 I'm glad we went to Geneva. I forgot how much I like going to farmers' markets. For dinner Sunday night, we had a spinach salad made with yellow tomatoes, red peppers, cucumbers, and goat cheese. We also had some yummy chicken sausage on pretzel bread. There were free samples, and I told the guy at the sausage booth that if my kid would eat the sausage, I'd buy some. He did and so that was dinner. 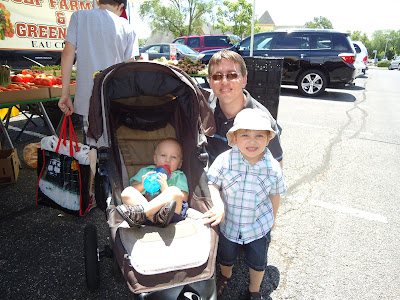 I'm hoping all the fathers out there had a great day on Sunday. :)
Posted by Melissa E. at 3:30 PM