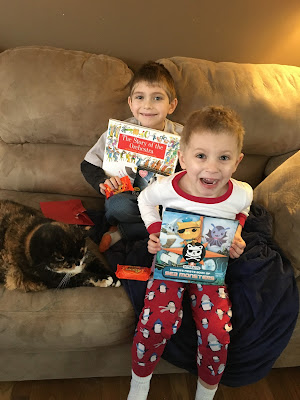 It makes me smile every time they bring me one of their "Valentine Books" to read and we can see what year they're from. Nick got a book about the orchestra. He's really, really into all kinds of music lately, and he wanted me to read the whole book to him. It took 15 minutes just to read two pages, so I think we'll have many nights of reading ahead.

This year Henry got a few Octonauts books. He's currently obsessed with these undersea adventurers, and we'd read the one Octonauts book he had probably a thousand times. I'm so glad they're is a selection now, so we don't expire of sheer boredom. 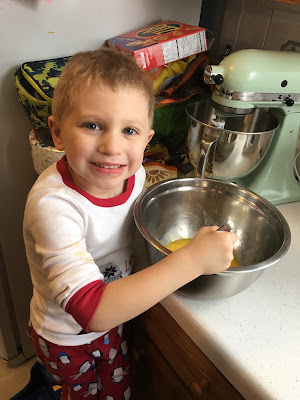 My project today was to make a copy version of Hostess cupcakes--you know, the chocolate kind with the ganache on top. I haven't been very creative lately (grading grad-school papers has taken up most of my time), and I wanted to do some baking with the boys. Henry helped with the mixing and with putting the wrappers into the holes. 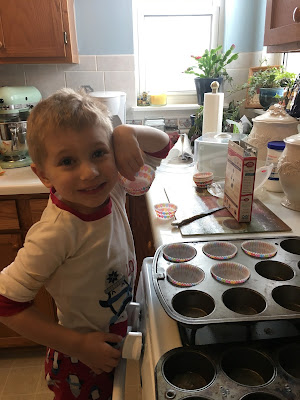 Nick? Well, he helped with licking marshmallow filling off the spatula. Honestly, he did put the ingredients into my stand mixer and press "on," but he spent the rest of the time eating marshmallow fluff. 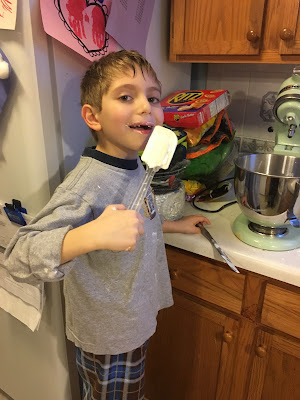 Nick also ate the little circles I cut out to make room for the creme. Very helpful, that boy was--he ate the insides of 24 cupcakes. 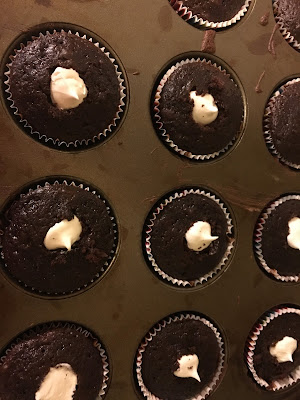 They both helped with the decoration. I didn't try the loopy white frosting. Instead, we just used Valentine's Day themed sprinkles, which worked pretty well.

By the way, I'd highly recommend this kind of cupcake. I don't think I'll ever make traditional frosting again. I like bittersweet ganache one hundred times better. 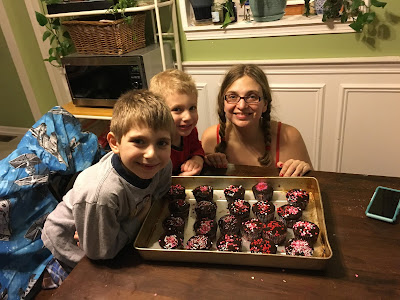 The boys made pictures for their daddy for Valentine's Day, in addition to the many cupcakes we made and consumed. Nick's artistic skills are improving, though I noticed he made himself taller than his daddy. (He's third from the left.) "That's just my Harry Potter hair," he said. "It makes me taller."

Nick traced his hand for this one. "Duby" is how he spelled "Tubby," Greg's kitty.

Henry drew his daddy a rainbow and wrote all kinds of stuff inside, though I don't know quite what most of it says. I had him copy the "I heart u" at the top, but the rest of it is all Henry's invention. Looks kind of like ancient runes to me. 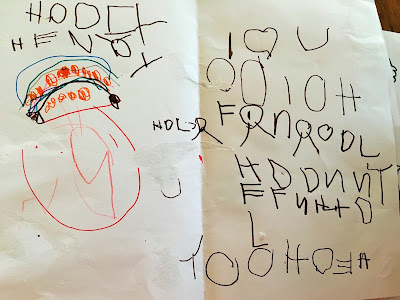 I think I'm going to go have another cupcake before Valentine's Day is over and the calories aren't free anymore.  :)
Posted by Melissa E. at 8:54 PM