Tonight Nick wanted to draw. We pulled out the crayons and paper.

Mommy: So what do you want to draw, Nick?
Nick: Octopus!
Mommy: Alrighty then. Octopuses it is, I suppose. Why octopuses?
Nick: They have legs!
Mommy: That's a great reason. 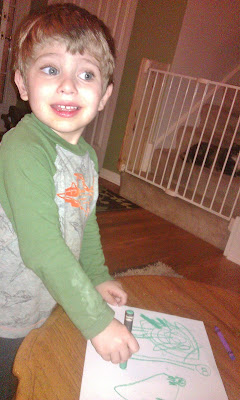 I demonstrated with my, ahem, superior crayon skills how to draw an octopus. Basically, I showed a circle with eight legs. Nick followed directions pretty well for a child who can neither put on his own shirt nor use the potty. 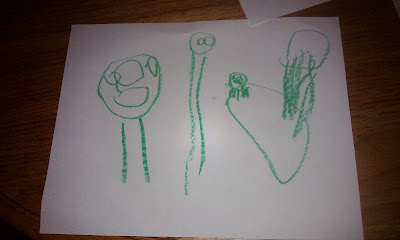 The one on the far right has the most promise of actually looking like an octopus. Nick, however, knew that his octopuses didn't have enough legs, and he wanted to try again. Nick kept trying to pronounce the plural form of octopus, and it came out sounding something like "octopussies" or "octopussessess." I ended up looking up whether it was octopi or octopuses, because I wasn't sure. Octopuses won the day. 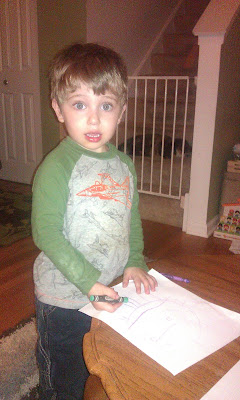 His result was adorable and artistic and amazing. But I'm his mommy. I have to say that. 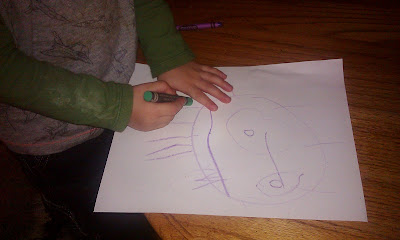 In my artistic analysis, I would have to say that Nick's octopus looks rather angry. Perhaps that's because he has twelve legs, some on his head. He definitely has eyes and a mouth, though. Nick is still working on his counting skills. Oh, and what was Mr. Henry doing during our drawing lesson? He was locating and chewing on whatever crayons he could find. 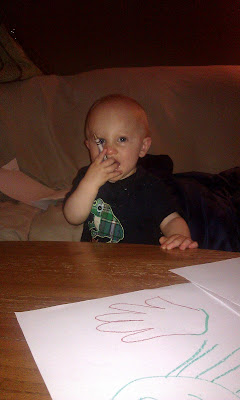