Yup. Mr. Henry turned five months old this week. Even Henry is surprised at how fast he is growing. 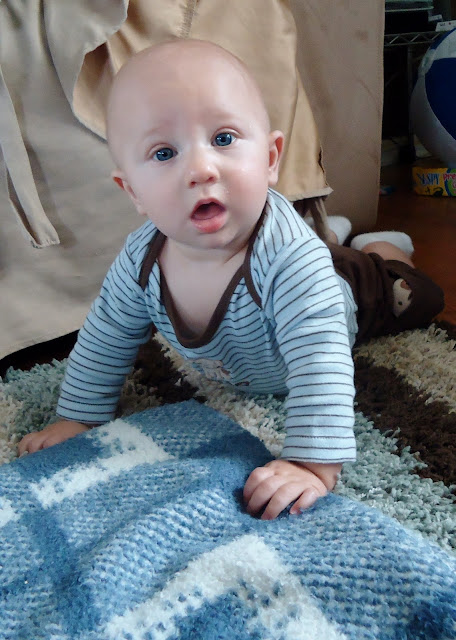 This week we had to buy size 3 diapers for Henry. That's in addition to the size 5 diapers we still have to buy for Nick. Henry sure is growing fast. He is not, however, sleeping well. That means, unfortunately, that Greg and I aren't sleeping well. 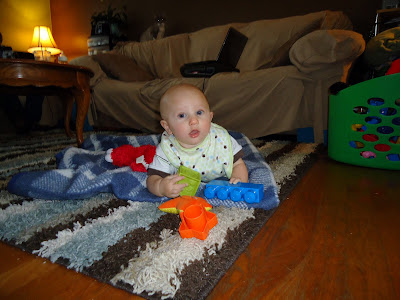 The last few nights have been especially rough. After teaching my class on Tuesday night and not getting home until 9 p.m., I then had parent-teacher conferences Wednesday and Thursday nights. Greg and I switch off getting up with Henry, but either way, we're both up when he is up.

On Wednesday night, Henry woke up when I was in the middle of my deepest kind of sleep. I only vaguely remember going over and picking him up. What I thought I did was set him next to me, snuggle him, and stick the bottle in his mouth. I then immediately passed out. I have quite the sleep debt lately.

Henry went to sleep relatively quickly, but we woke up in a huge puddle. I realized, at 6 a.m. when I woke up and Henry was still sleeping next to me, that I hadn't put the bottle in his mouth at all. Apparently, I stuck the bottle in Henry's armpit and went to sleep. The entire bottle leaked all over my pajamas, Henry's pajamas, and our sheets. I felt like an absolute moron. 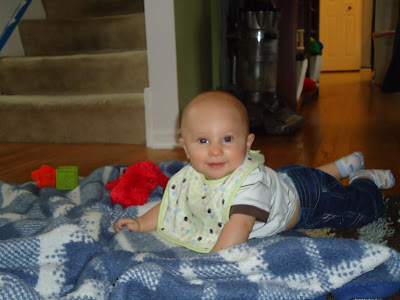 I read this book recently called Brain Rules, by John Medina. He talks a lot about sleep debt, and how it can negatively impact your whole life. One thing that was mentioned was how your IQ can drop at least a point for every hour of sleep you've lost. I guess this IQ loss is cumulative until you get caught up on sleep. No wonder I feel like a moron. I'm not a huge proponent for the validity of IQ tests in general, but I've probably dropped at least 30 points in the last few months due to sleep loss. I suppose it's not surprising I fed my baby's armpit. 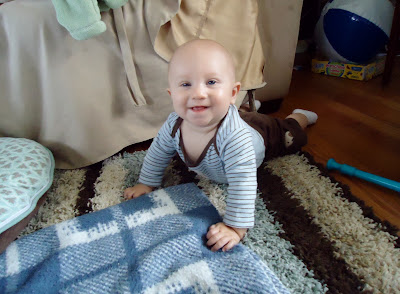 See? Henry is laughing at me. I love this little munchkin, but I do wish he would sleep. He would have a much smarter mommy.
Posted by Melissa E. at 10:35 PM