Nick sounds like a seal this week because he's getting over the croup. He's been coughing since Sunday, and it is much worse at night. This picture is from Saturday, before the croup hit. We really thought he just had a cold or allergies. It's that time of year. 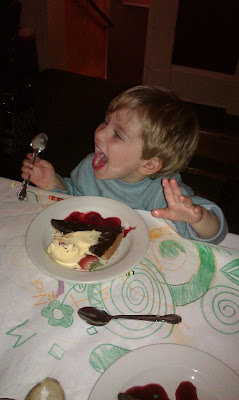 On Tuesday night, however, Nick started barking like a seal. He also had a low-grade fever. Grandma Toni took him to the pediatrician, who immediately identified his cough as the croup. Apparently, our doctor even called in her assistant so she could listen to Nick's cough. I guess it's one of those things you can identify just by sound, and she wanted the assistant to hear it in real life.  The doctor said we shouldn't be too worried because this is very common and Nick is doing well.
The good news is that Nick doesn't seem to be in too much discomfort. We've given him Advil or Tylenol when he's complained or been running a fever, but he hasn't had any since Wednesday. He also doesn't really sound like a seal anymore. His cough is very productive, but he's not coughing very often and he is running around quite a bit.
The bad news is that he's suffering from what happens to little kids when they're feeling slightly better after an illness, but still aren't in tip-top shape. Nick, you see, has been quite a pain in the, er, neck today.
He started out the day by throwing his shoe at me because we were out of bananas. Then he threw a screaming fit because I opened the refrigerator door to get his milk instead of letting him do it. At nap time, I had to throw him over my shoulder like a sack of potatoes to get him in bed. He screamed for 25 minutes straight before passing out. I know how it feels to be sick, so I'm trying to have sympathy for him. Trying being the operative term here.
Here's hoping that Nick wakes up in tip top shape tomorrow.   :)
Posted by Melissa E. at 9:11 PM