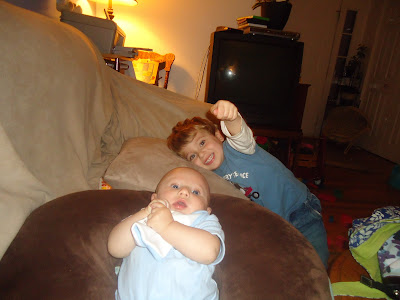 Nick loves bacon. Whenever he smells it he goes crazy. Point in case:

Not sure if you can totally understand Nick-ese, so I'll explain. Nick was yelling out the window to the boys playing across the way. (Who, by the way, couldn't hear him because the window was closed.) He was saying, "The bacon is for Nick. You can't have my bacon!" Then he was demanding that I give him bacon NOW, even though I was still cooking it. That's when I grabbed my camera, because I thought he was being pretty cute. ﻿
Things have been pretty nuts around here, but I figured I'd take a few minutes and tell you about one funny event in a nice, relaxing Saturday morning.  :)﻿
Posted by Melissa E. at 2:19 PM