Here she is, Miss Eleanor Rose, Ellie for short.


She was born September 28 at 9:08 a.m. at 20 inches long and weighed 7 pounds, 15 ounces. Ellie was the longest and the largest of my three children, though she feels tiny to me. She was born a full three inches longer than Nick (17") and one inch longer than Henry (19"). Right now she's happily curled up against my chest in a baby sling. Ellie is happiest when she's being cuddled. Who is doing the cuddling is less important, but she's already getting attached to her big brothers. Here's the first picture of all three of them together. Nick's shirt says, "Big Brother Again!," Henry's says, "Big Brother Finally!," and Ellie's shirt says," Little Sister."


Having a baby can take a lot out of you! I've been meaning to sit down and write a blog post since we left the hospital over a week ago, but life got away from me somewhat. I started this post a week ago, and am just finishing it today. Adjusting to being a mom of three while recovering from abdominal surgery has been challenging, to say the least.


Right now I'm finishing up teaching a grad school class at the same time I'm taking a grad school class, but dealing with the homework of my two sons this week was more work than both of those combined! Anyhow, I keep this blog mainly so that I have a place to record my thoughts before they're forgotten. Fleeting things, thoughts are, and I want to be able to look back and remember what life was like during these early days of having three children.

So here's my story, and Ellie's, too. If hospital/birthing/nursing stories aren't your cup of tea, you can stop reading here. I promise I won't mind. I always like to read the stories of other moms' birthing experiences, so perhaps someone will want to read mine. TMI warning ahead, I'm afraid.

Greg and I arrived at the hospital very early in the morning on Ellie's Birthday. I was scheduled for a c-section with general anesthetic, so I had to go through some extra hoops to explain why spinal anesthesia wouldn't work for me. Basically, I have severe calcification on my spine, and when I was having Nick, the anesthesiologist tried seven different needles down my spine. I failed the pinch test every time, meaning that I could feel exactly where they were pinching me. I didn't lose feeling at all, and they eventually just knocked me out. I didn't want to let them try again with Henry or Eleanor, because the "trying" they did with Nick resulted in severe spinal headaches, nausea, and dizziness for weeks after his birth. Anyhow, I often describe the experience like this: You go in pregnant and not in labor, they put you to sleep, and you wake up with a morphine pump and a baby. Not too shabby.

There's more to it than that, though. Because they don't want the general to impact the baby, they wait to knock you out until right before they're ready to cut. That means you get strapped down and totally prepped while fully conscious, and the doctor is literally standing there, scalpel in hand, when they have you count backwards from ten. I think I hit seven.

This time, though, waking up was not a gentle process. You see, from what I've heard from all the doctors who were there, as I was coming out of anesthesia, I somehow arched my back and fell off the operating table. The anesthesiologist managed to catch me before I face planted, but I still landed on the floor, on my knees. This knocked out my IV line, catheter, etc. So I woke up to pain like I've never felt before (no IV=no pain meds) as they held me down and the anesthesiologist used an ultrasound machine to try to insert an IV line. I believe I was actually screaming. Not fun, but no permanent injuries. 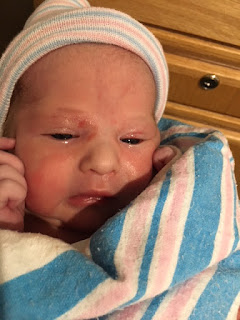 Ellie, on the other hand, was born with no complications, an 8 or 9 on the Apgar scale. She was also very relaxed, and she had a a decent amount of hair, which really surprised me. Greg got to hold her and feed her as soon as she'd been checked out. 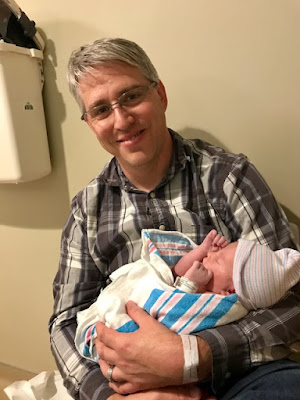 Did you know they don't bathe newborns for the first 8 hours or so nowadays? I guess it is better for them to wait, so they just wipe them down really good and do a bath later. Ellie didn't seem to mind waiting, though she wasn't terribly pleased about her bath when it did happen. I think she just doesn't like being cold. 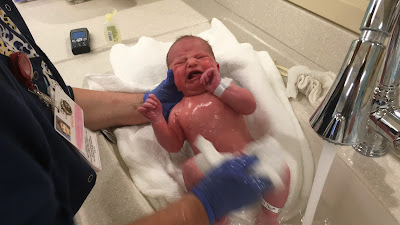 Let me tell you about my daughter. Wow, does it feel good to say that--there was a time when I thought I'd never have a daughter. Eleanor's eyes are blue, though sometimes it looks like they might turn green. Greg says it'd only be fair if she ends up with his green eyes, since both of our sons have my blue eyes. Her hair is similar to my natural color, a sort of dark blonde or light brown. When she's awake, Ellie is very alert, and she can already do baby push-ups when she's lying on my chest and wants to make eye contact. 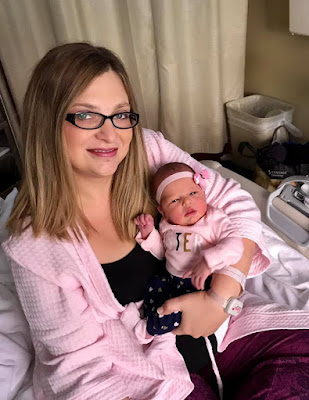 Since coming home from the hospital, Ellie has shown herself to be a very laid-back baby. At night, she'll sleep 4-5 hours at a stretch. The second night after coming home, we woke up to find she'd slept six straight hours. Except for two nights where she had some gas and cried a lot, she's been waking up only one to two times at night. (knock on wood) 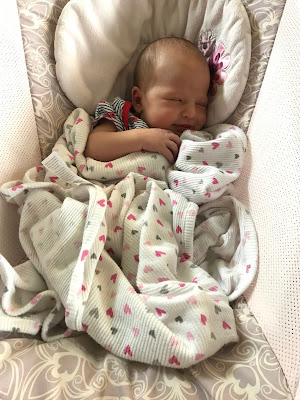 Ellie is also VERY SERIOUS about her food. When she wants to eat, she is not patient and there's no consoling her. She's 90% formula-fed, and Miss Ellie doesn't care if her bottles are room temperature or straight from the refrigerator. She just wants her meal quickly. I had a breast reduction when I was 17, and they told me at the time I probably wouldn't be able to breastfeed. Well, they were wrong about that, and all three of my children have been able to nurse to some degree, especially at the beginning. I can only make a maximum of 2 ounces every day TOTAL, even if I pump every 2 hours, so I end up mostly pumping. Ellie figured out really quickly that the milk comes out more quickly from the bottle, so I can only get her to latch after she's mostly assuaged her hunger from a bottle. Ah, well. I know she's at least getting some protection from my immune system in the tiny bit of milk I can make.

I'm going to try to write more here while I am on maternity leave, so that I have a record of how Ellie was when she was little. Later this week, I'd like to write a post about Ellie's brothers and how they're adjusting to having a little sister.
Posted by Melissa E. at 9:50 PM