A Basement Room for Nick and Henry

This summer has been quite an adventure! Our whole house is undergoing major renovations, all towards the cause of making our two bedroom home comfortably fit two adults, three children, and two cats. Step one is now fully complete! 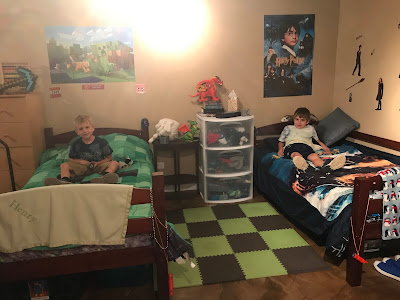 Though they've been sleeping down there for awhile now, just this morning I finished putting together their room. Don't feel sorry for them--we tried our best to give them the nicest, hugest basement bedroom you'll ever see. I'll give you the grand tour in a minute, but first. . . Imagine every toy and piece of clothing these two kids have ever owned, all dumped together randomly in boxes, stacked all the way up to the ceiling of an unfinished basement. . . . That is what this room looked like just a few months ago. In fact, you don't have to imagine. This is what the basement looked like after we cleaned out all of the boxes and before the renovations started. There are lighting issues because the bulb in the ceiling only worked if you tied something heavy to the string (like a saucepan). 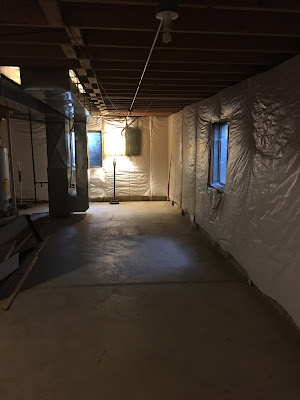 Now for the post-renovation pictures. As you walk down the stairs into the boys' "apartment," notice the carpeted stairs and the stained concrete. We wanted everything to be as indestructible as possible, since Henry and Nick are rough-and-tumble guys. The door at the bottom of the stairs is to our storage room, which we left unfinished and with a lock on it.

As I was planning out their new room, each boy picked out his own "theme." I originally wanted to divide the room with a bookshelf, but for now, there is a dedicated bedroom area and a big playroom area. They can move the furniture around when they get older and want their own spaces. 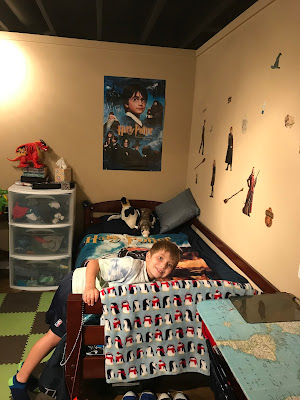 Nick picked a Harry Potter theme, and we had wall stickers left over from his birthday party last November. He wanted the poster from the first movie to go over his bed, and his grandma got him a blanket with the train to Hogwarts on it, plus the foam mat between their beds. See the ceiling? It's a special black spray for an industrial look. It was way cheaper than a dropped ceiling, and it makes the room feel taller, too. 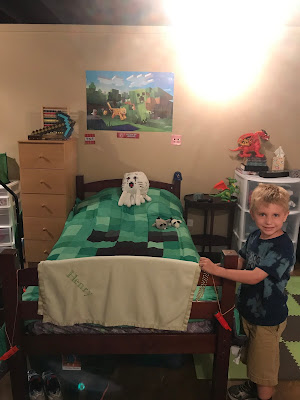 Henry, true to form, picked a Minecraft theme. He loves his stuffed ghast and his creeper bedspread--if everything is square, Henry is happy. Their beds are unbunked now, so I was able to fit six plastic bins with lids under each of their beds. Out-of-season clothing? Boxes of blocks and cars? All of them fit under the beds. 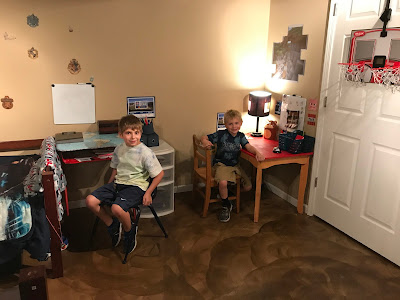 This is their study area. I found these desks at a garage sale, and both Henry and Nick now have their own space to study, color, and write. Nick's desk is actually an old metal school desk that was painted red and decoupaged with a world map. Henry has a Minecraft "window" over his desk. Oh, and both boys can play basketball on the back of the storage closet door. 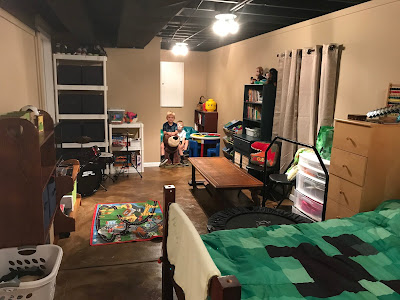 Here's what the rest of their room looks like. It really is like a miniature apartment. (The little nook in the back is because the hot water heater and the furnace are walled off from the rest of the space, for safety. In their "apartment," Nick and Henry have a trampoline, a reading nook, a TV with a DVD player, a karaoke machine, a Wii system (no cable or internet, though), and of course, Nick has his drum set.


Another garage sale find was the huge beanbag chair in the corner (below). See the Lego table and the shelves of boxes? Everything was dumped together, and it took me about a week to get it all sorted out nicely. Yes, this pregnant lady sat on the concrete floor, day after day, sorting magnets from Squigz from beads from Legos from Zoobs, with crayons and random detritus mixed in for good measure. These guys have more Legos than they know what to do with! 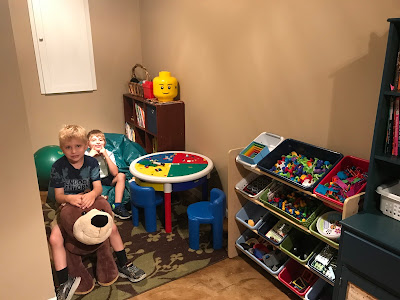 Last picture, I promise. See the blue cabinet to the left of the window? Those are rulers glued to the front cabinet doors--another garage sale find from the same lady from whom I bought the desks. After sitting on the concrete floor all weekend, I just ordered another one of those large green foam mats (24 square feet), so pretty soon they'll have a soft area in the middle of the room if they want to sit on the floor. The boys also got their own brand-new curtains on their window, and you'd think with all the light they block my boys would sleep past 7 a.m. No such luck, unfortunately. 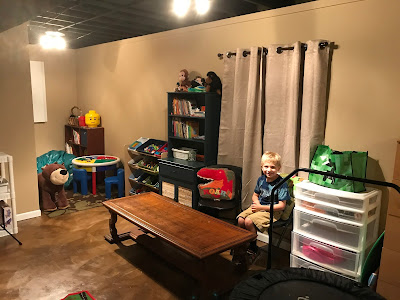 I guess the pregnancy nesting has hit me early this time around. When I was pregnant with Henry, the urge came later. I suppose that's what I get for doing major home renovations two months before having a baby. Our next step? Greg just tore out the carpeting (original to the house, circa 1997) from our bedroom. The entire second floor is getting engineered hardwood and a new coat of paint, and the stairs are getting new, heavy-duty carpeting as well. The hope is to have the whole upstairs done by the time this baby arrives.