Quite the Busy Weekend

Ahh, finally a weekend with warm temperatures and sunny skies. We sure took advantage of it! 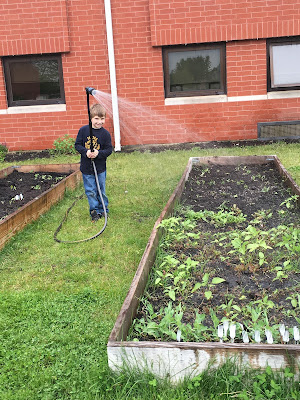 On Friday night we started off by doing some watering at my school garden. The boys helped, and even picked a few radishes, though they wouldn't eat them. 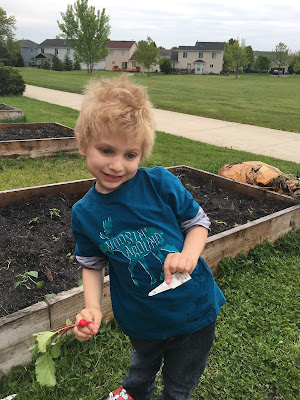 Henry pretended to read a story to his "class" and found out what us teachers already know--it is mighty hard to read upside down! "How does my teacher do it?" he asked. 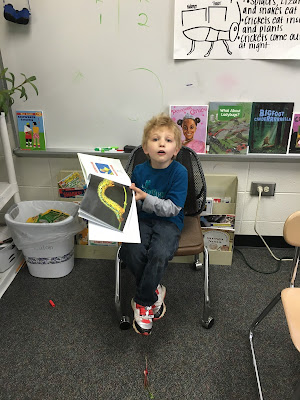 When we got home, Nick brushed Miss Molly, who was very appreciative. No, really, she'd growl and then purr. If Nick tried to stop, she'd growl really loud and touch his arm with her paw.


On Saturday, on the way to Nick's music class, Henry drew the cutest self-portrait ever. 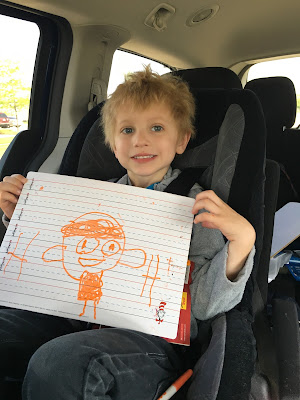 Looks just like him, doesn't it? Nick jammed out on his drums as usual, but this time he refused to take off his new mirrored shades. 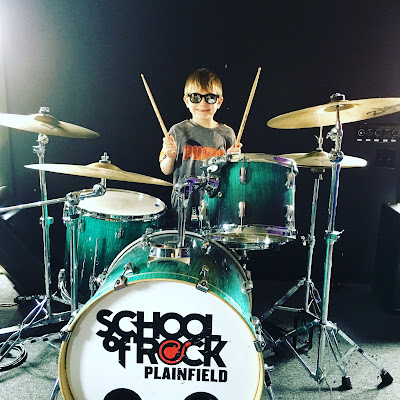 While Nick was playing the drums, Henry and I went walking and saw a garage sale. I found a new kitchen table, complete with four chairs. Not too bad for $75, though I paid the guy a little more to deliver it, put it together, and tighten all of the screws. Totally worth it. 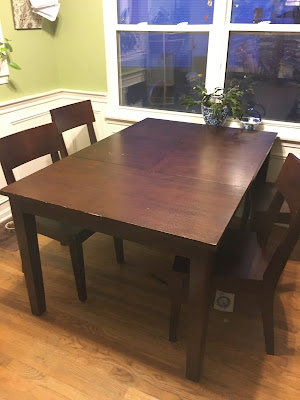 At another garage sale, I scored a ton of summer clothes for Nick--enough to fill a garbage bag, actually (all for $20). As dirty as my boys get, they sometimes need three outfit changes in a day, so more clothes is a good thing. After the garage sales, Greg came home from work, and we decided to visit the bike shop. Nick needed his bike chain fixed. While we were there, Mr. Henry picked out an early birthday present--his very first bicycle!


Now, Henry did not start out yesterday really knowing how to ride a bicycle. But he is one determined little fellow, and he spent probably four hours straight riding his bike up and down the sidewalk.


Every time his wheel went into the grass, he hit a bump, or he tried to turn, the bike tipped over and he fell. There was a point when he was screaming at the bike, "Bad bike! Stop dropping me!" I was impressed, though, that every time I asked him if he was done riding for the day, he said, "No!" Gosh darn it, he was going to beat the bicycle!


This is a shot of our ipad. We found this as Henry was playing on the ipad this morning. Check out the subtotal! I about had a heart attack until I realized that I wasn't signed in--I only use Amazon on my laptop, thank goodness. As my mother said later when I was telling her the story, it's a good thing I hadn't enabled one-click ordering! I guess this means Henry wants an Octonauts birthday party.


I didn't take many pictures today (Sunday). Why, you ask? Well, I spent most of the day sitting on the screened-in porch grading papers for my graduate students. I did get this nice shot of Henry and his artwork.

I also snapped this, er, interesting shot of Nick and a banana. What is he doing? Well, you see, the banana fell off, and he got really mad at it (yes, the banana). He wanted to tape it back together, and was quite perturbed when his daddy wouldn't let him use the electrical tape. 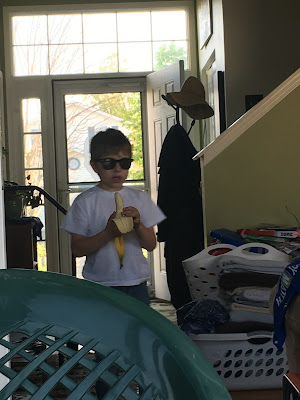 The banana did win, eventually. He gave up and ate it even though it was "messed up," as Nick said. Or would that mean that Nick won, because the banana was devoured?
Posted by Melissa E. at 9:25 PM