You know what the best part about water parks is for me? The end result of ravenous, sleepy, cheerful little boys. There's nothing like six hours straight of going down water slides and splashing around to make you tired and agreeable. 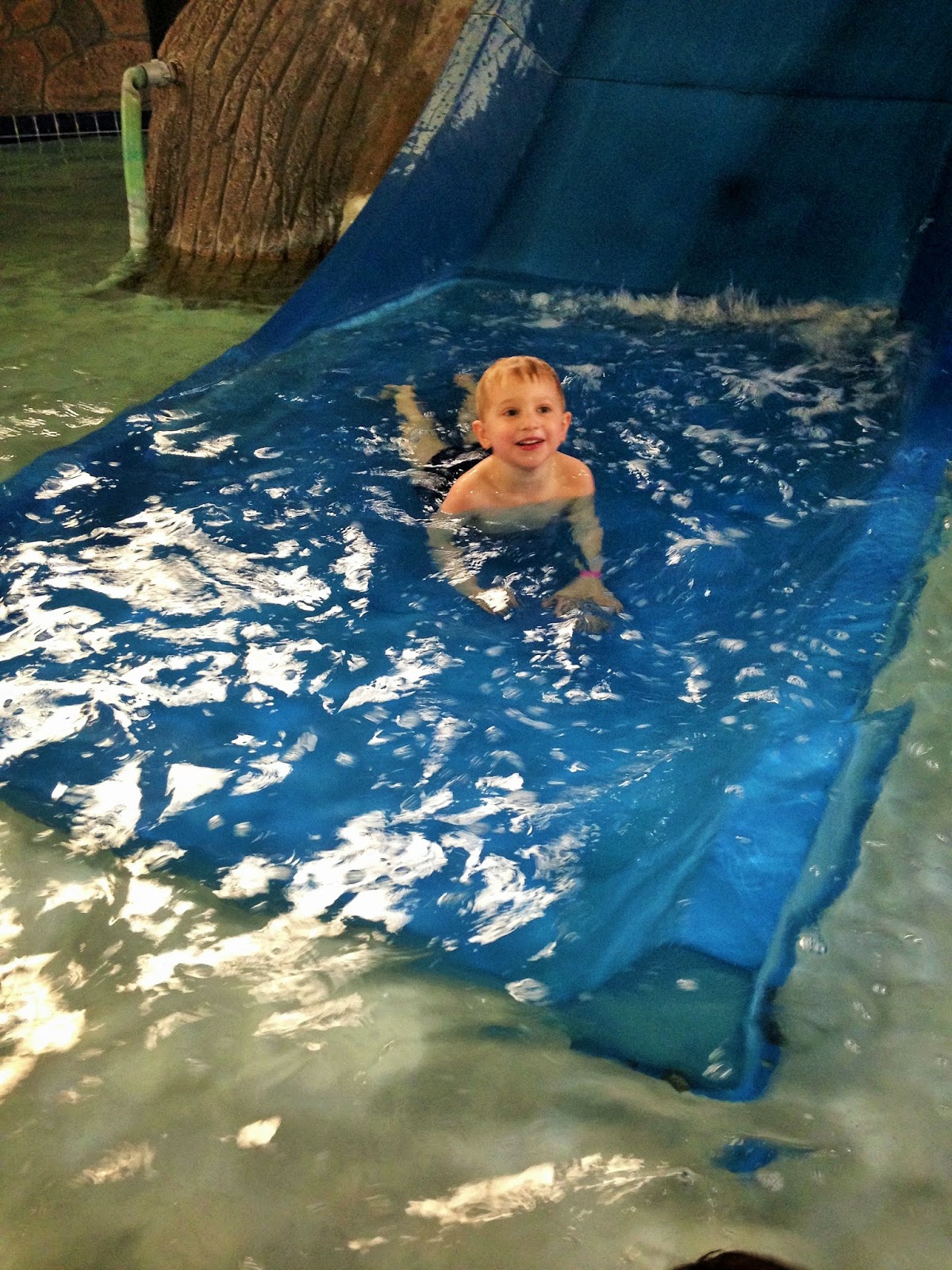 Timber Ridge, in Lake Geneva, ended up being much smaller than the place we stayed in Wisconsin Dells last summer. That was okay, though, because it was slightly easier to keep track of the boys since it was just one giant room. One giant room with awesome water slides! 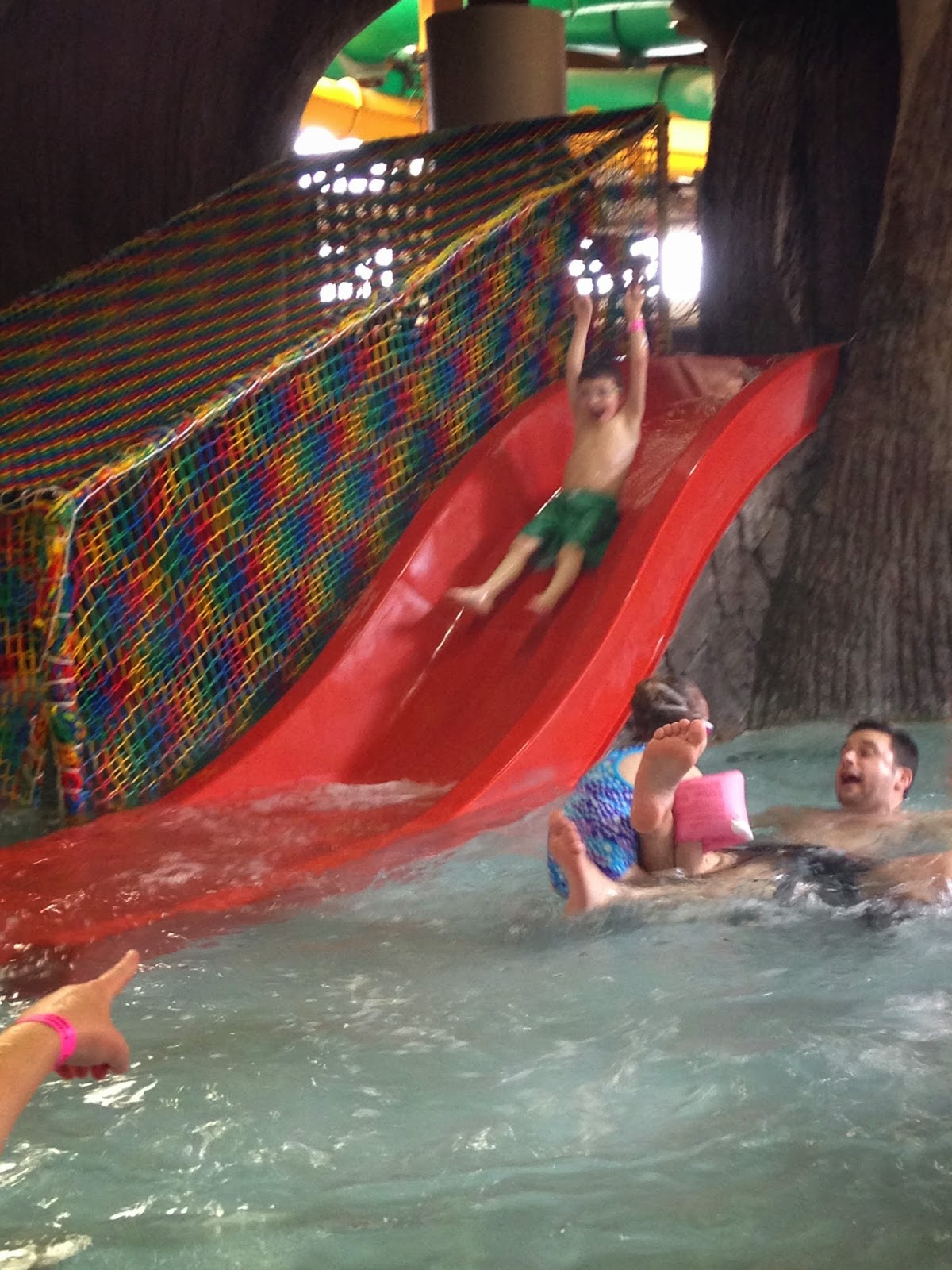 Henry is quite the daredevil. He wanted to go on the big tube slide again and again. When he's older, I bet he'll go by himself all day long. For now, he went with Greg and I and begged us to go over and over again. 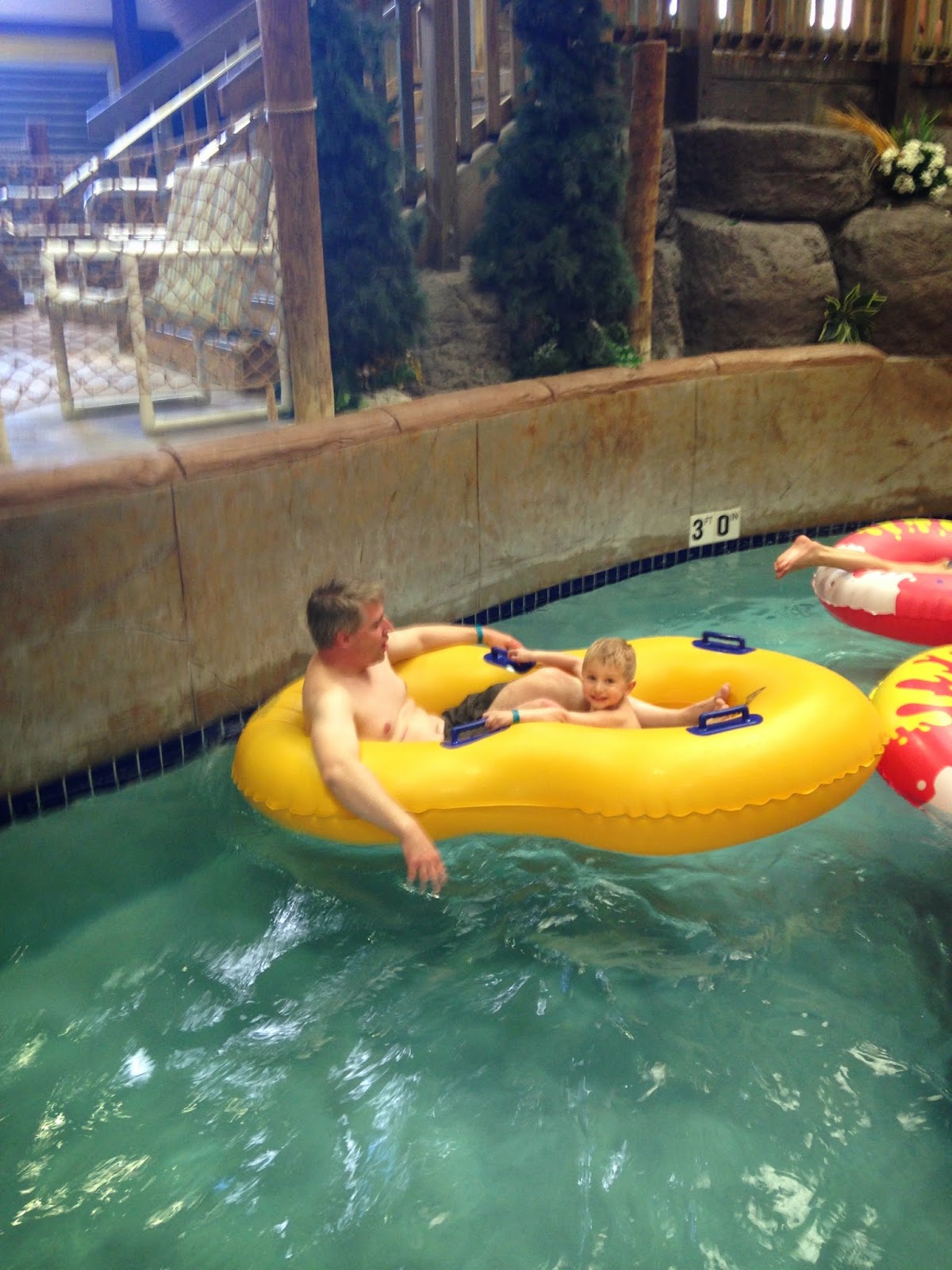 Now Henry works up a mighty hunger from swimming. At one point he came up to me about two hours after lunch, just ravenous. Poor Henry was nearly in tears he was so hungry. Would you believe he ate this entire hot pretzel by himself? Yup. 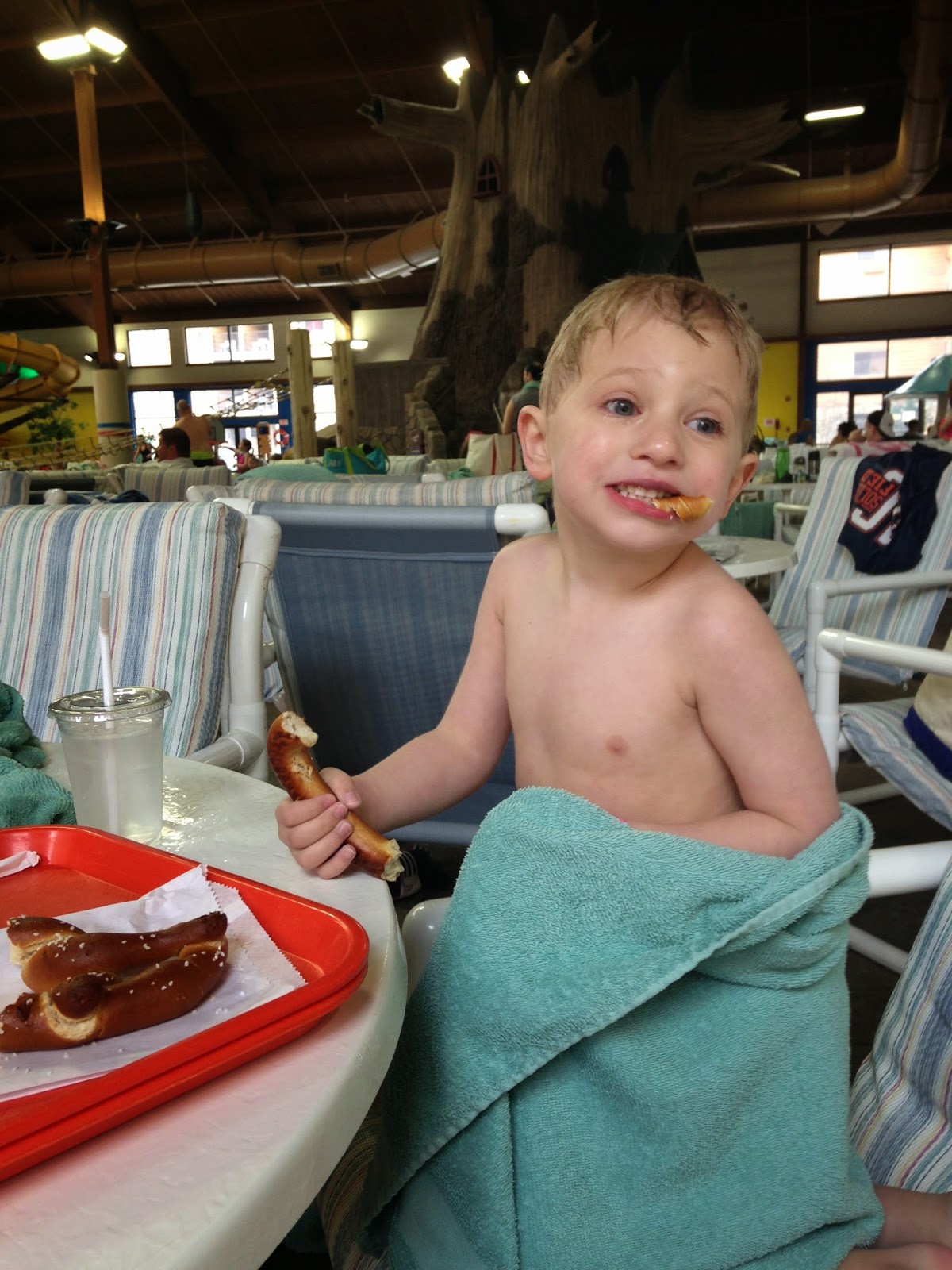 We finally got Nick to try a tube slide. He was too scared to try these last summer, but he's gotten over his fear. My brave boy did a great job!


Both boys were pretty comfortable in the water on this trip. Nick was even able to swim with a life jacket on. We didn't give him any real instruction, he just kind of picked it up. Check him out on this water slide--when he lands, the water is over his head but he doesn't care.

For this trip, the boys' Aunt Sarah was able to join us, and she brought with their cousin--Baby Sophie. She is just the cutest thing in her little swimsuit, and she loved the warm water. 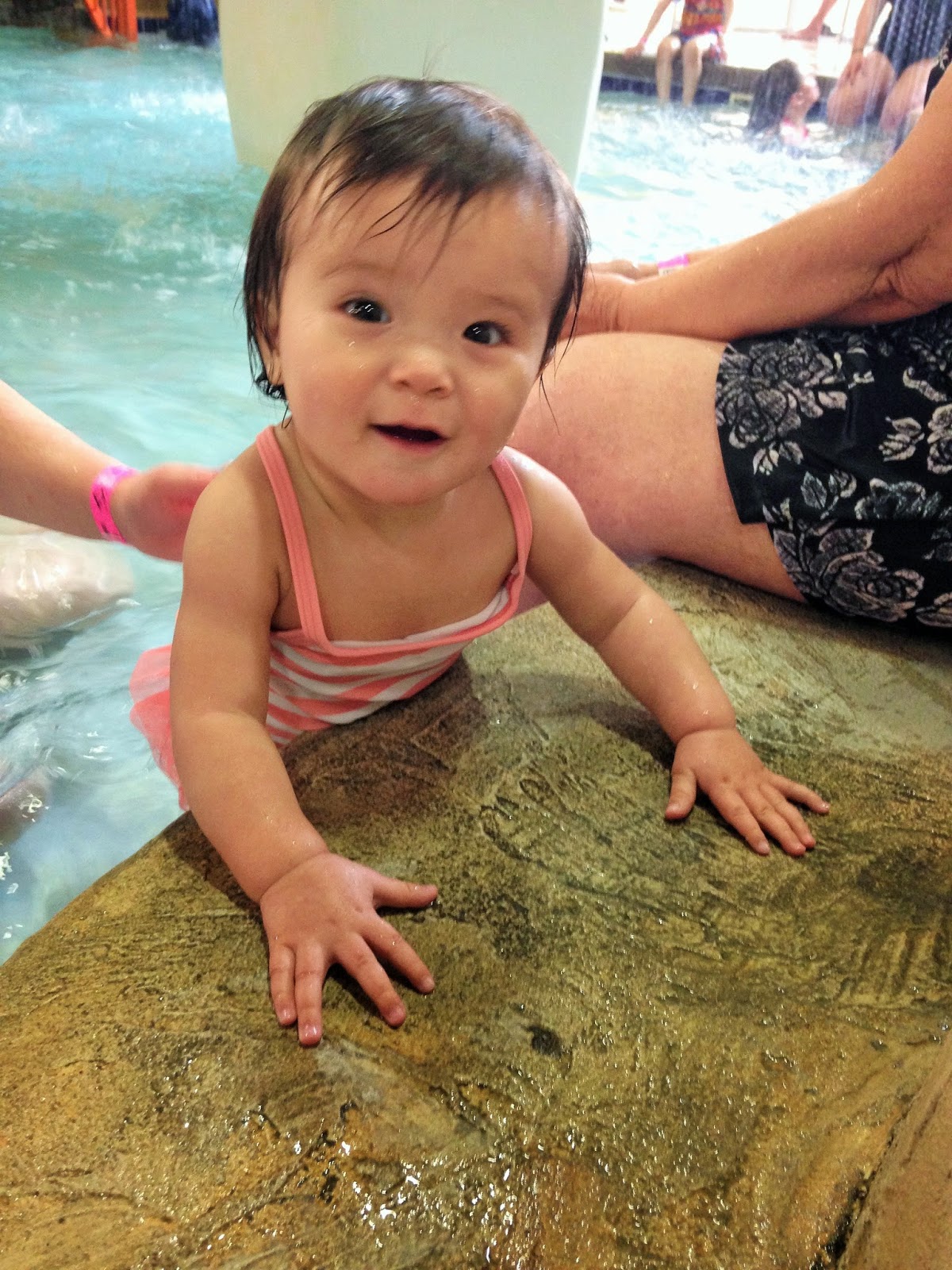 I was pretty impressed with this place, especially for the price. The lifeguards were really on top of things, and everything was so clean. Best of all, there were warm towels whenever you asked for them at the entrance. 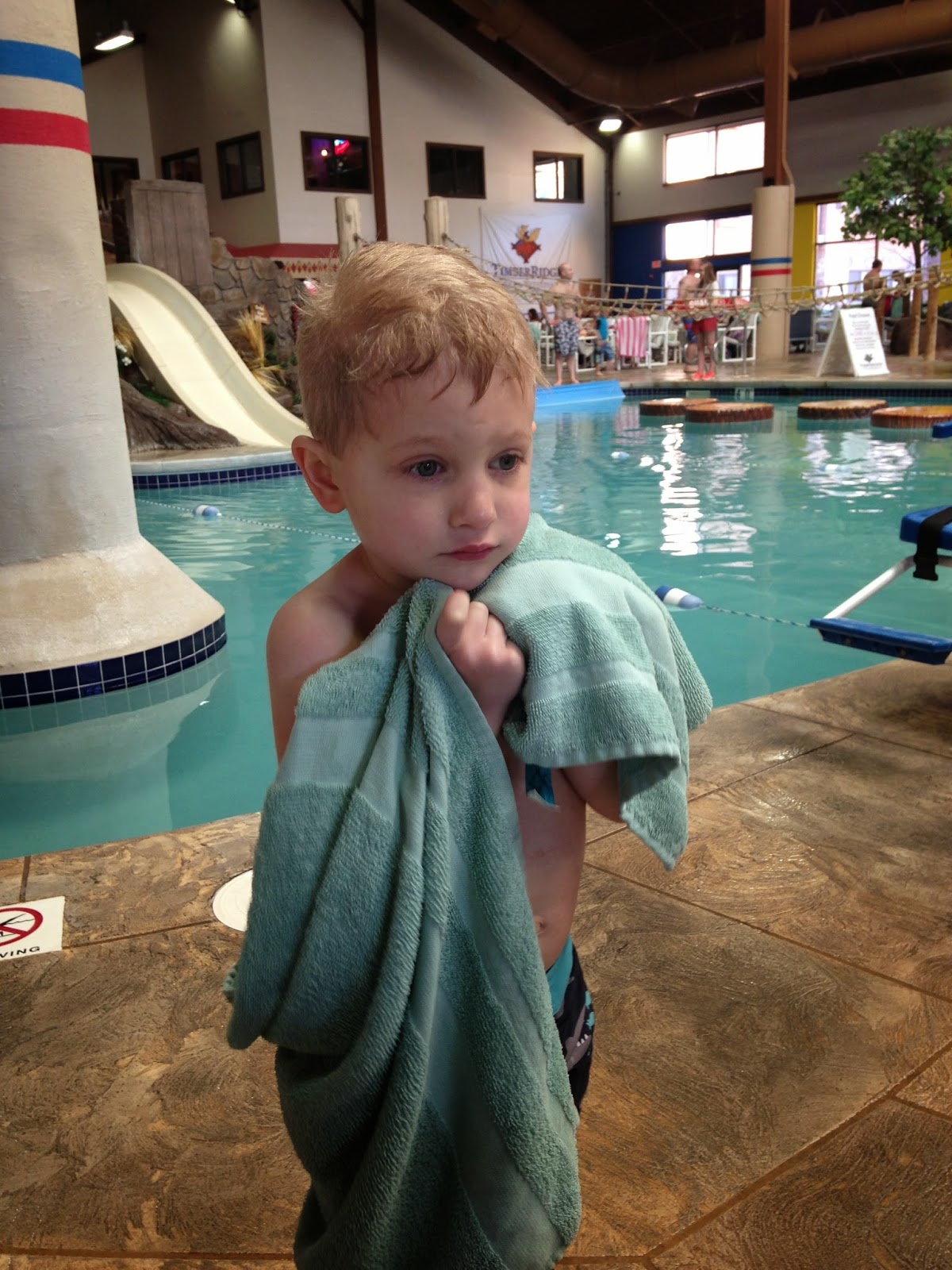 There's nothing like a warm towel after swimming. Except maybe for warm sprays of water that come up out of the floor. . . 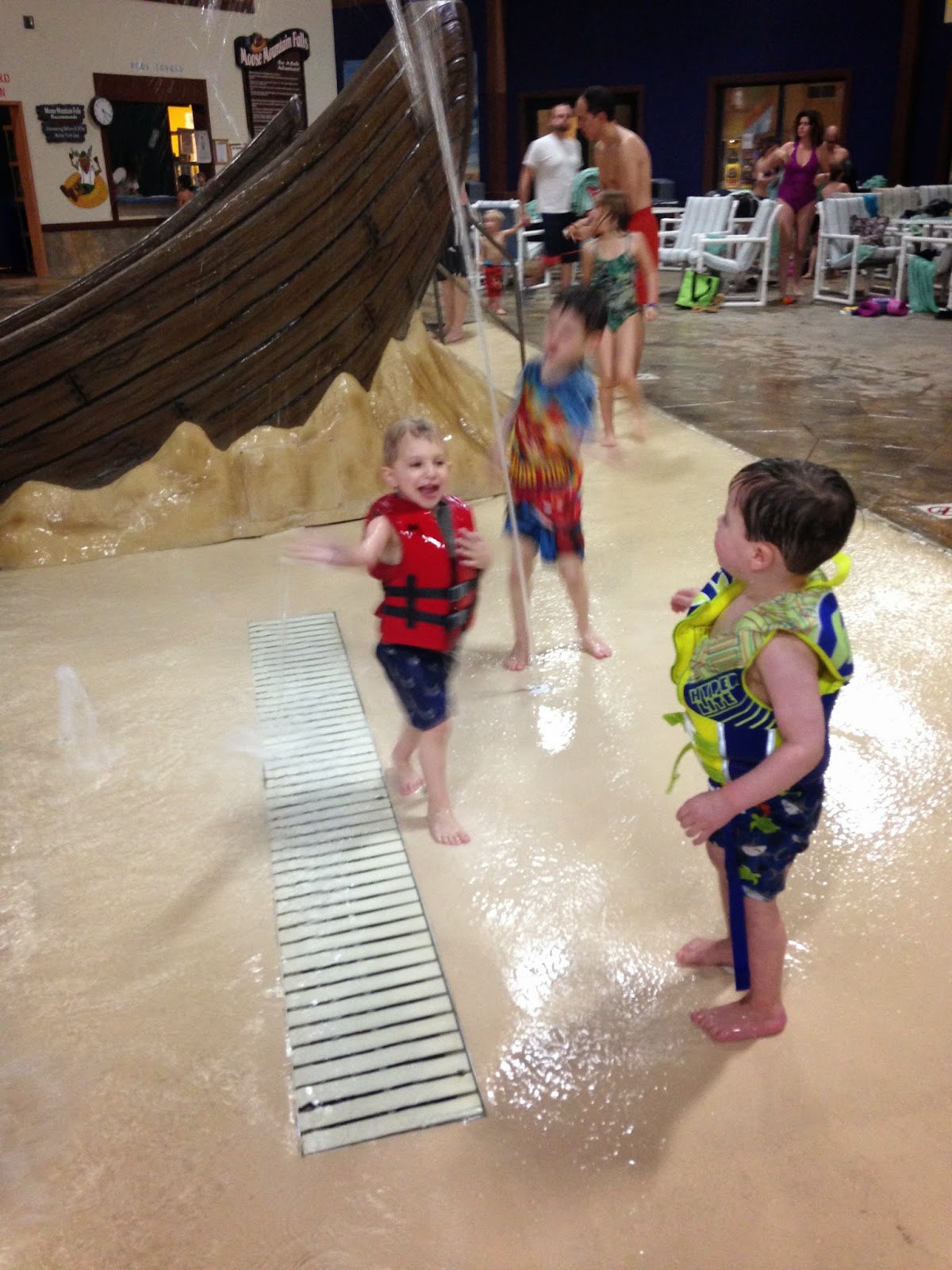 . . .or a giant mushroom that rains water softly around you. 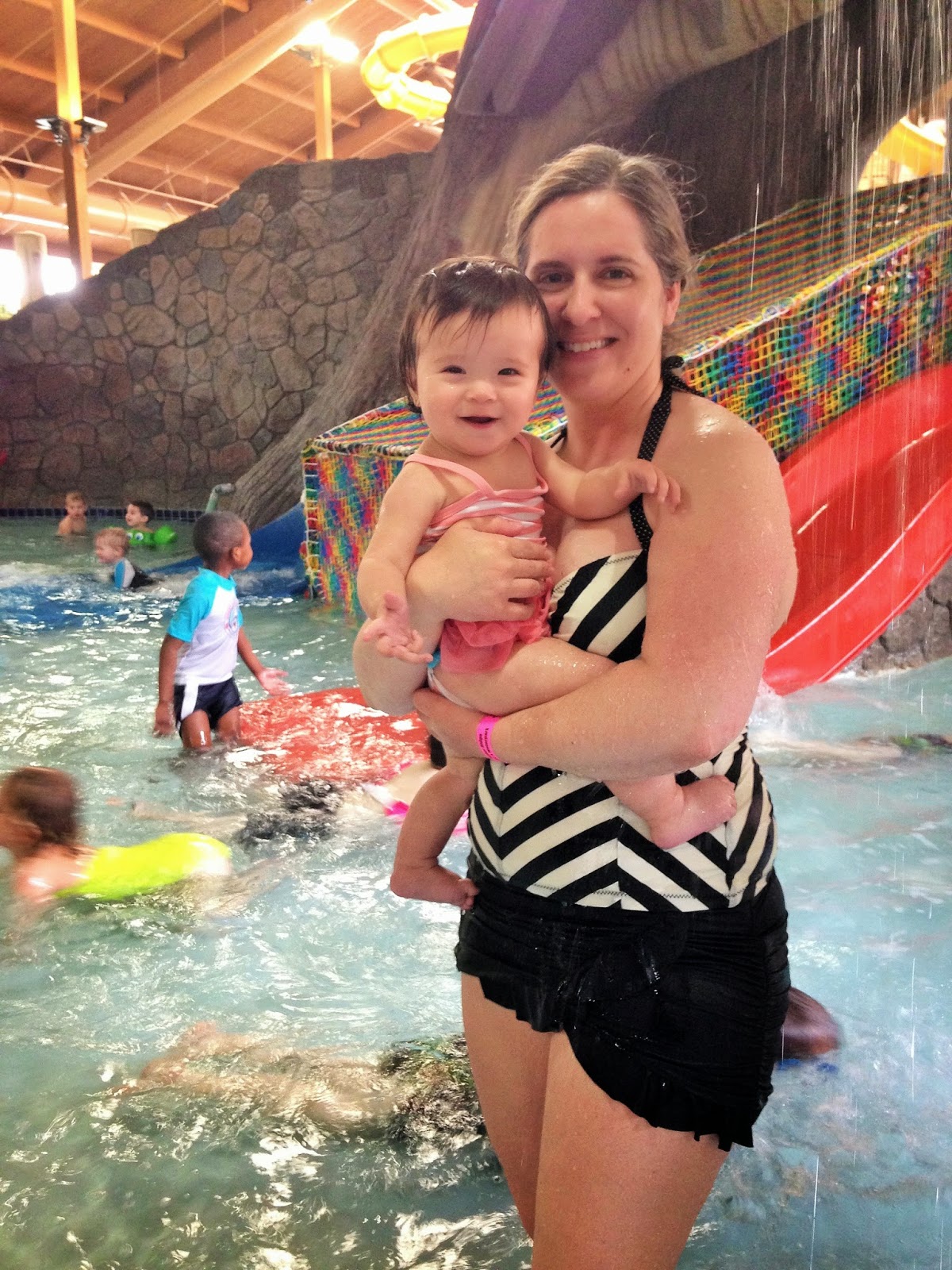 Nick wore his goggles upside down for over three hours. He insisted he liked them better that way. Both boys, actually, had red marks on them from the goggles, chafing from their swim trunks and life jackets rubbing, and little scrapes all over their knees and feet from scraping the bottom of the pool. 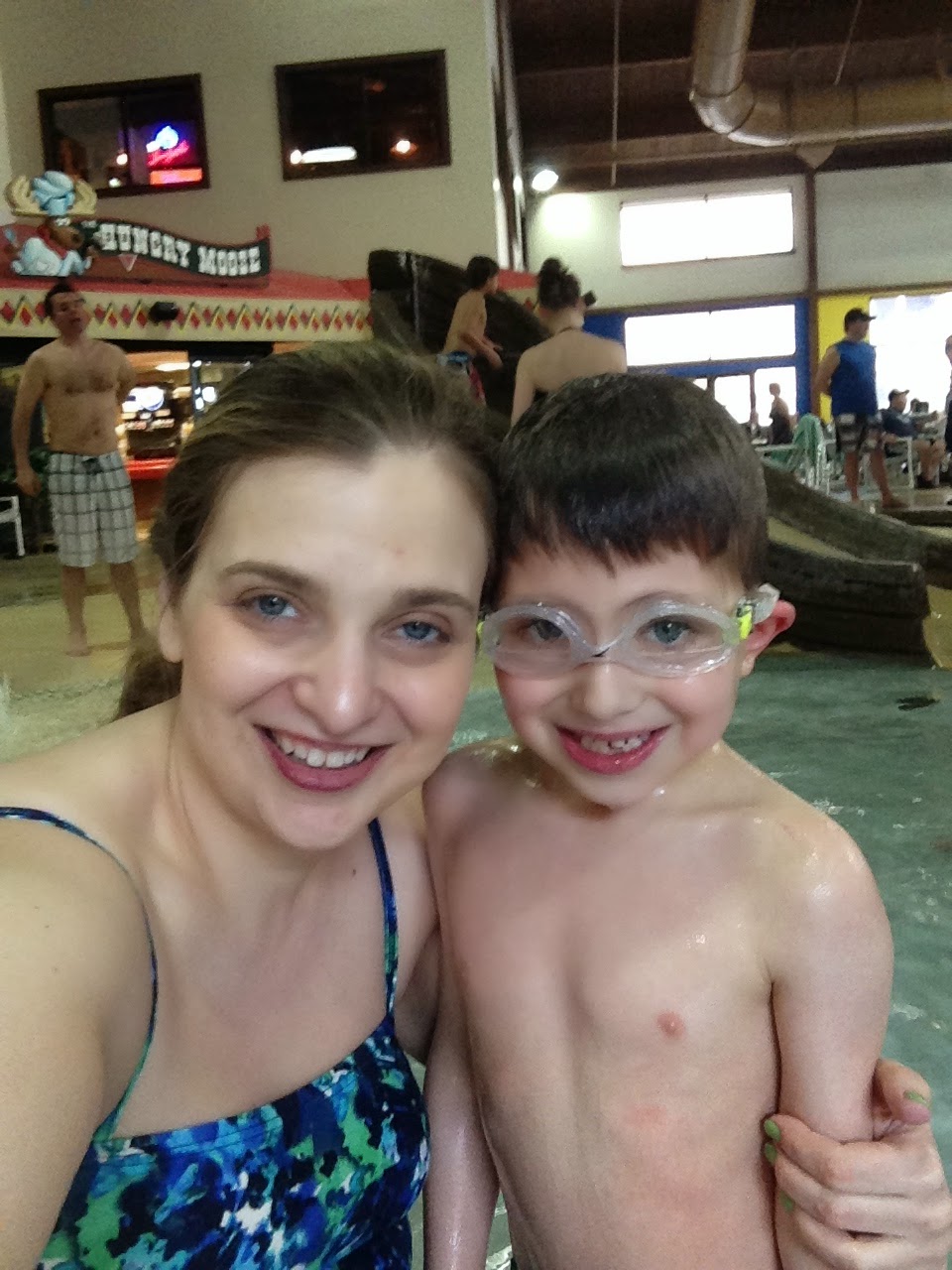 Neither one even mentioned any injuries until we were done swimming, though. They were too busy having fun! 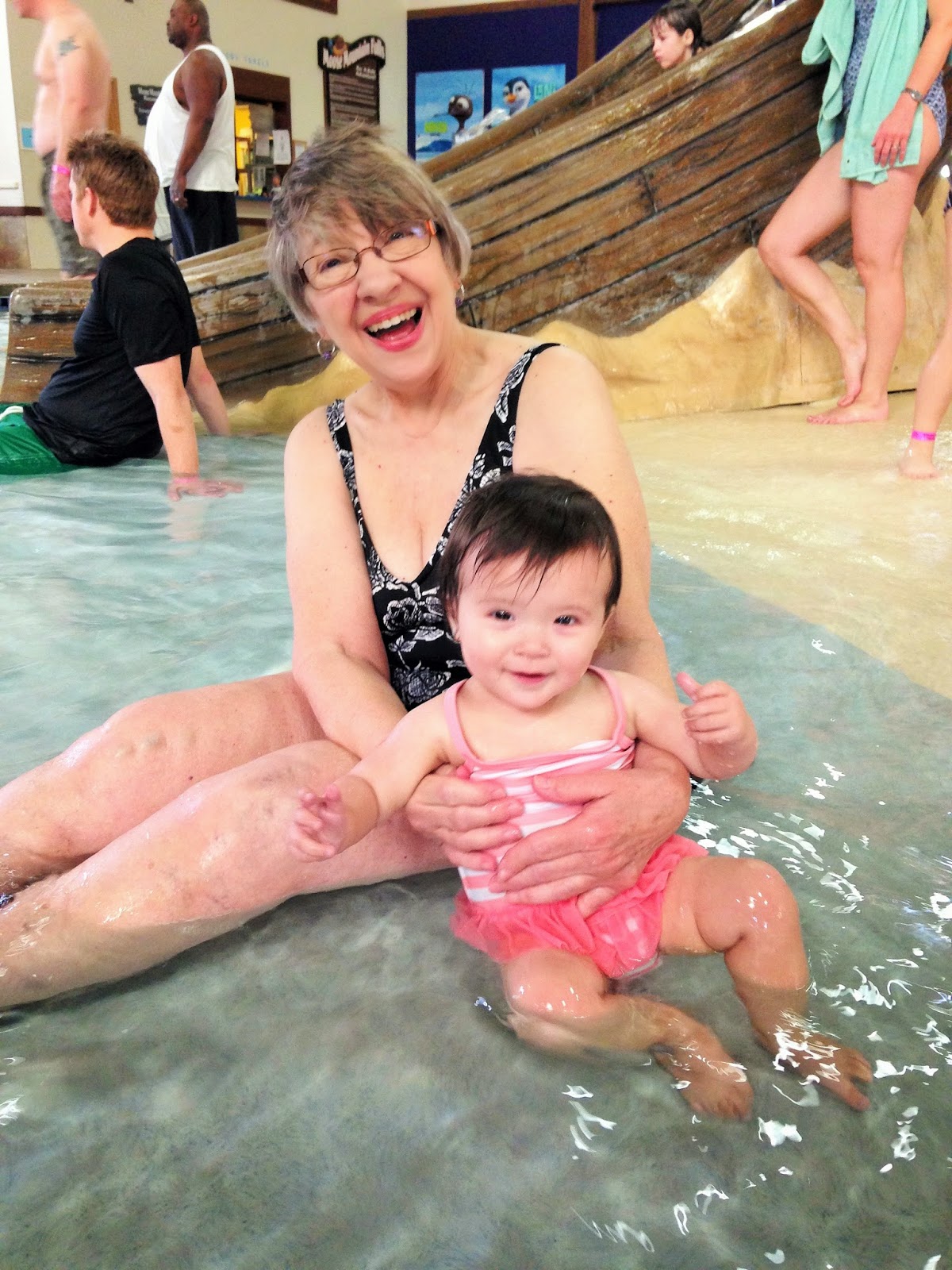 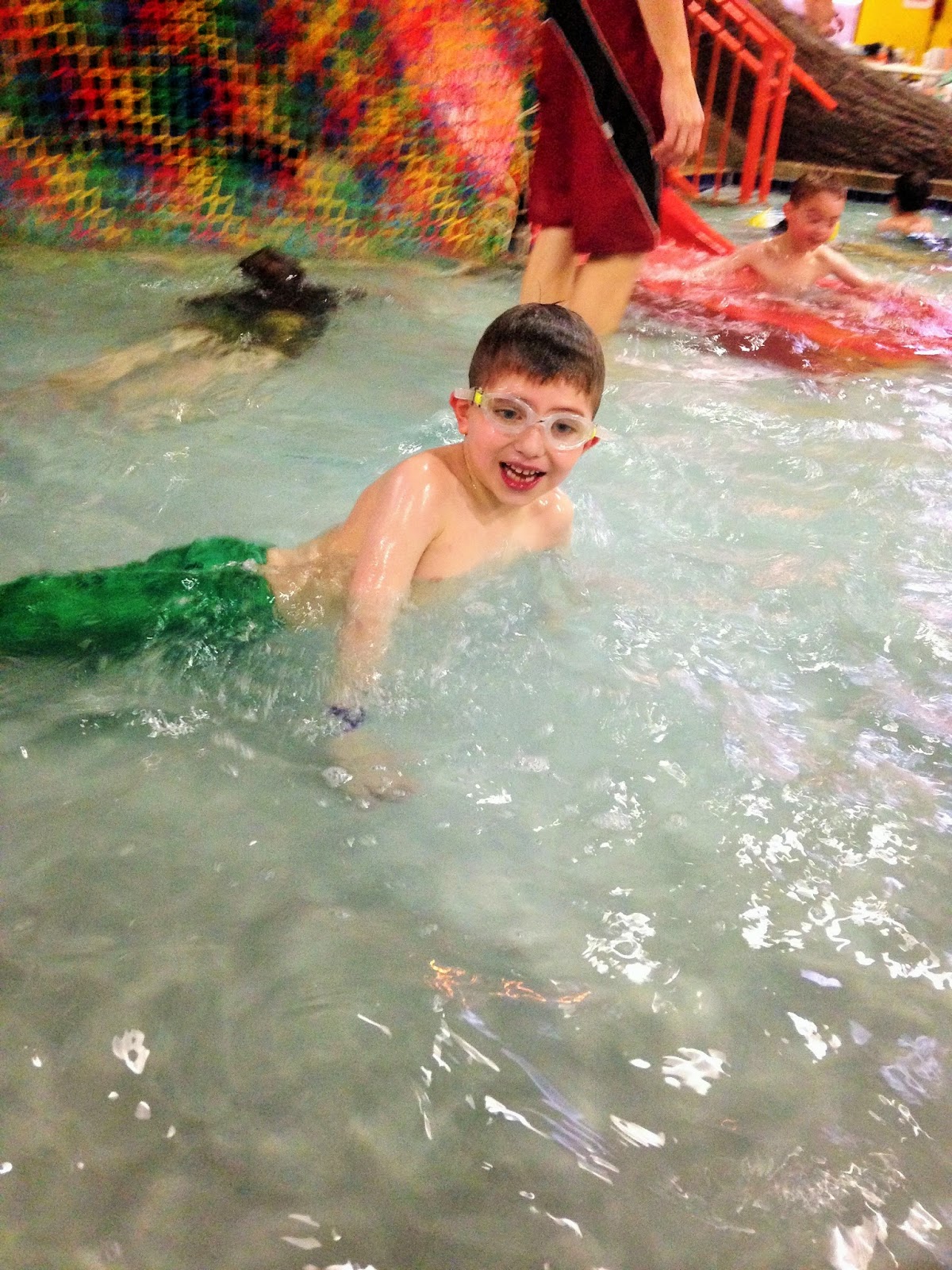