Outside Time and Homemade Ice Cream

Since I was too contagious to visit my mom for Mother's Day, the boys and I decided to go and visit her last Saturday. The weather, thankfully was warm enough to go outside, though only just. The chill in the air didn't bother the boys, though. They love Grandma and Grandpa's backyard!


So is it a little much with the matchy-matchy? I can't make up my mind. Most days I think it's really cute, then sometimes I'm not sure. I think I'll keep doing it until the boys refuse to dress alike anymore. I had someone ask me the other day if they were twins! I told the lady they were two and a half years apart, but Nick is small for his age and Henry is about average.


Henry loved the play doh Grandma and Grandpa saved for him! 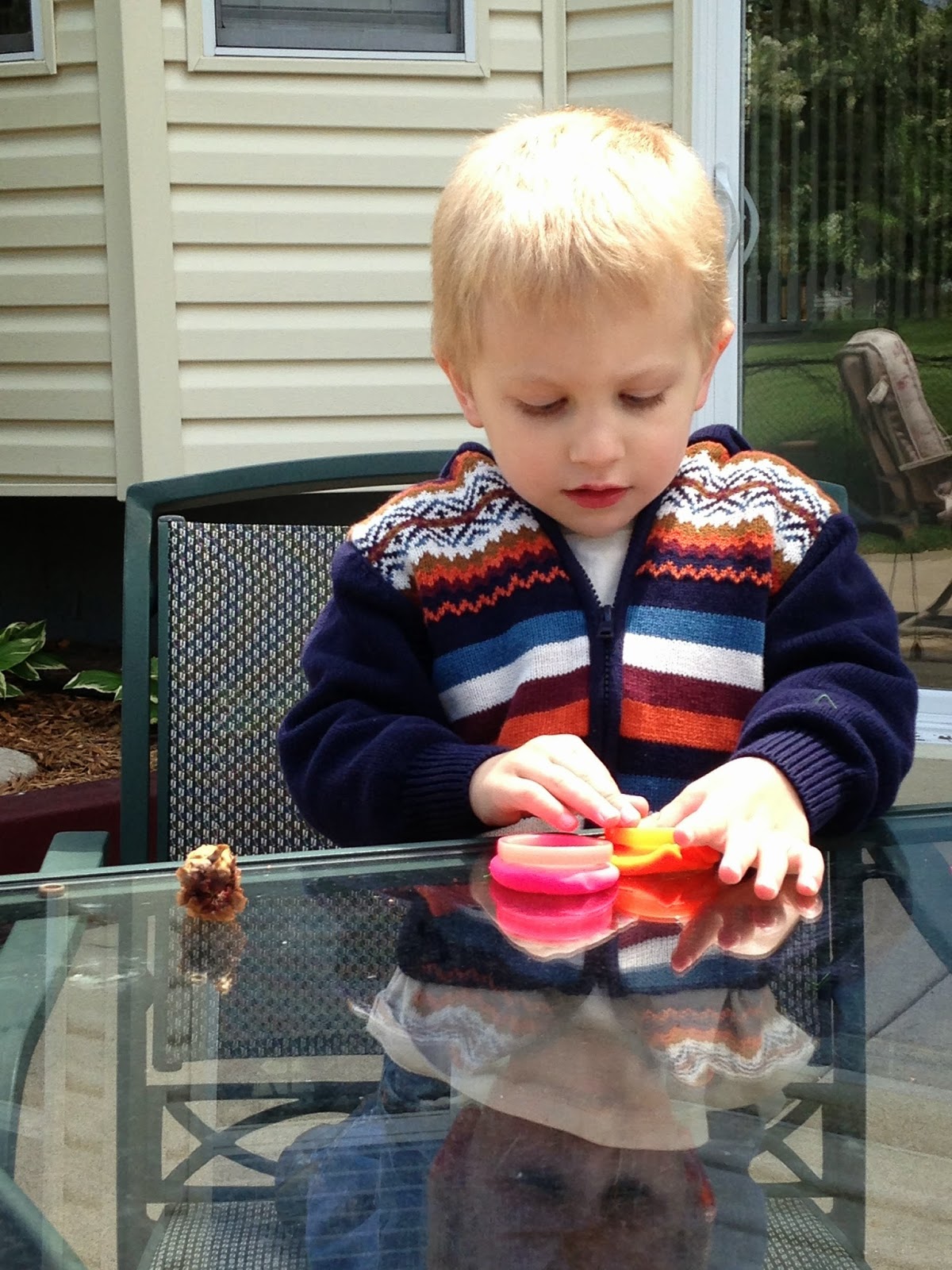 That boy would play with play doh all day if we let him. He even smuggles it sometimes and we find it later. Henry hasn't yet figured out that it dries out and becomes no good if it gets stuck, say, in the toybox or under one's bed.


In other news, Henry and Rusty finally made friends. . . at least for the most part. Rusty is still a little wary of Henry (with good reason), but he'll let him pet his fur now. Rusty even licked Henry a few times, and Henry liked it!


I really wish we had a fence. At my mom's house, we could just sit and watch the boys run around and play with little effort expended on safety. At home, I feel like we're always dealing with one kid running too far (toward the pond or the street) or somebody sneaking into the garage and bringing out something random. 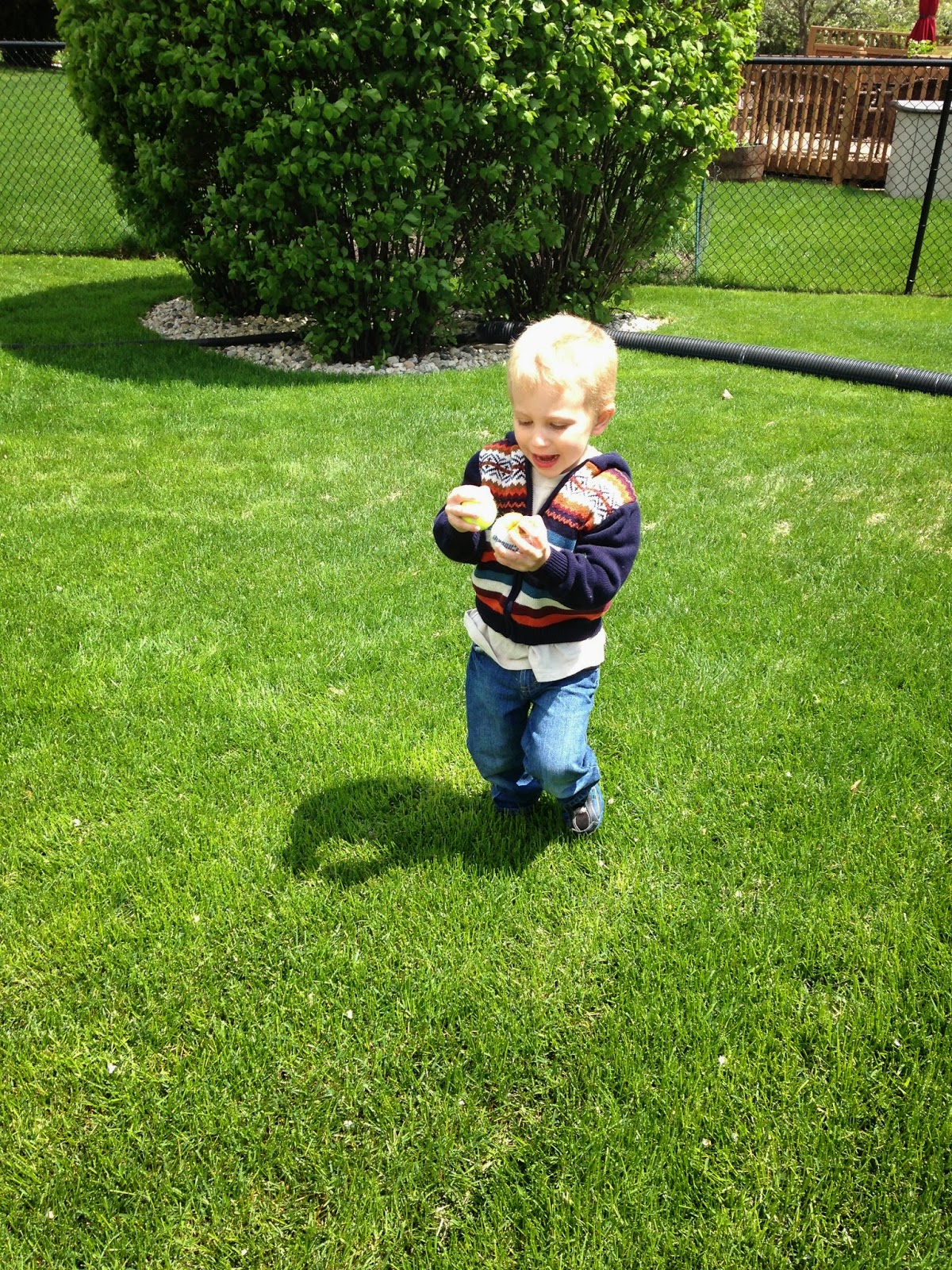 Henry especially loved Grandpa Ray's shed. He kept disappearing in there and coming out with random sticks and stuff. Nick and Henry were pretending the shed was their house, and they didn't want to leave "their house" to come inside. Only the possibility of making ice cream brought them inside. . . 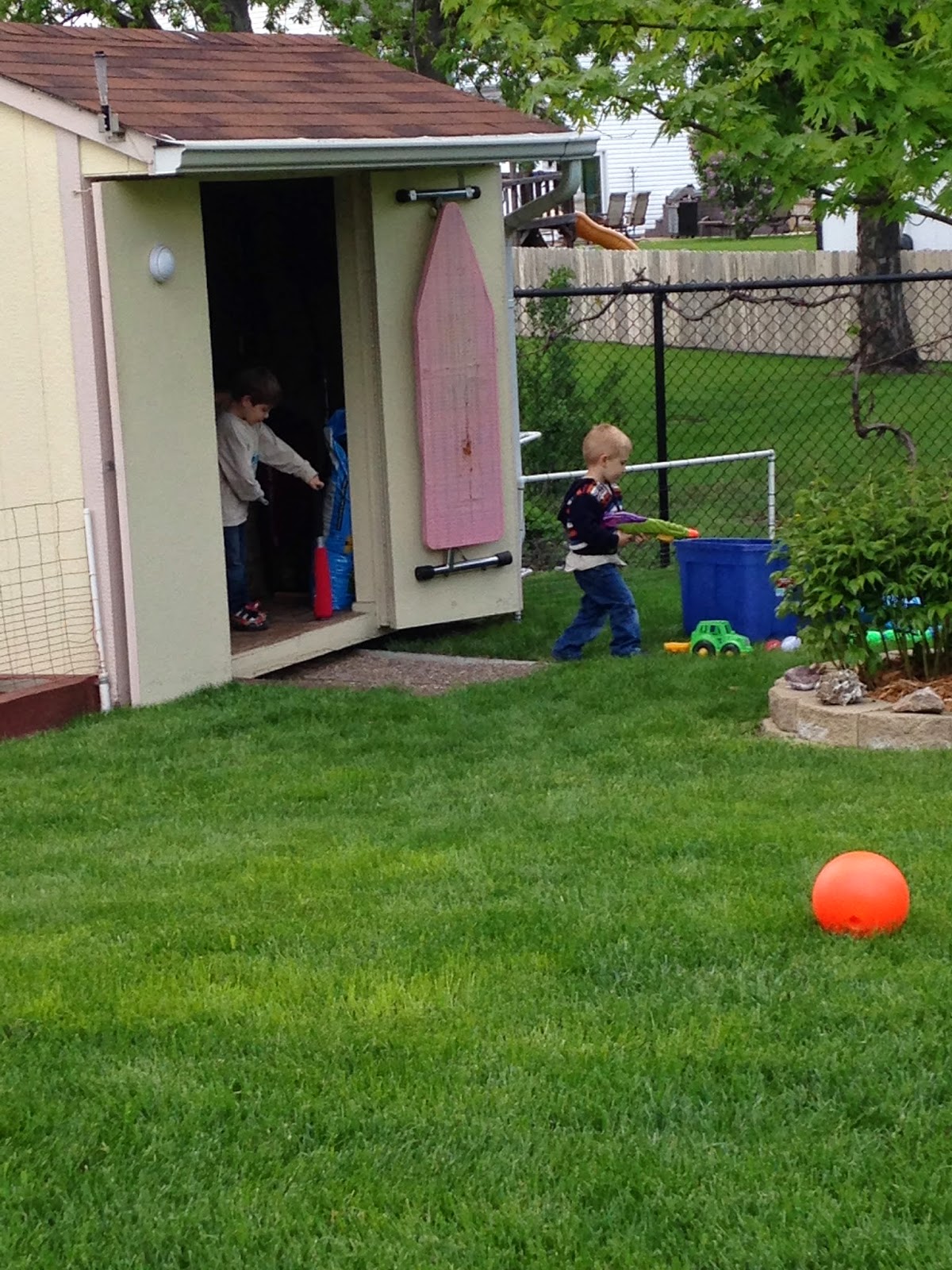 When I asked Nick what his favorite part of our visit was, he responded, "Making ice cream with Grandma Linda!" My mother likes to make things from scratch, so, of course she has an ice-cream cone maker (doesn't everyone?). She also figured out how to use her Ninja blender to make frozen yogurt. 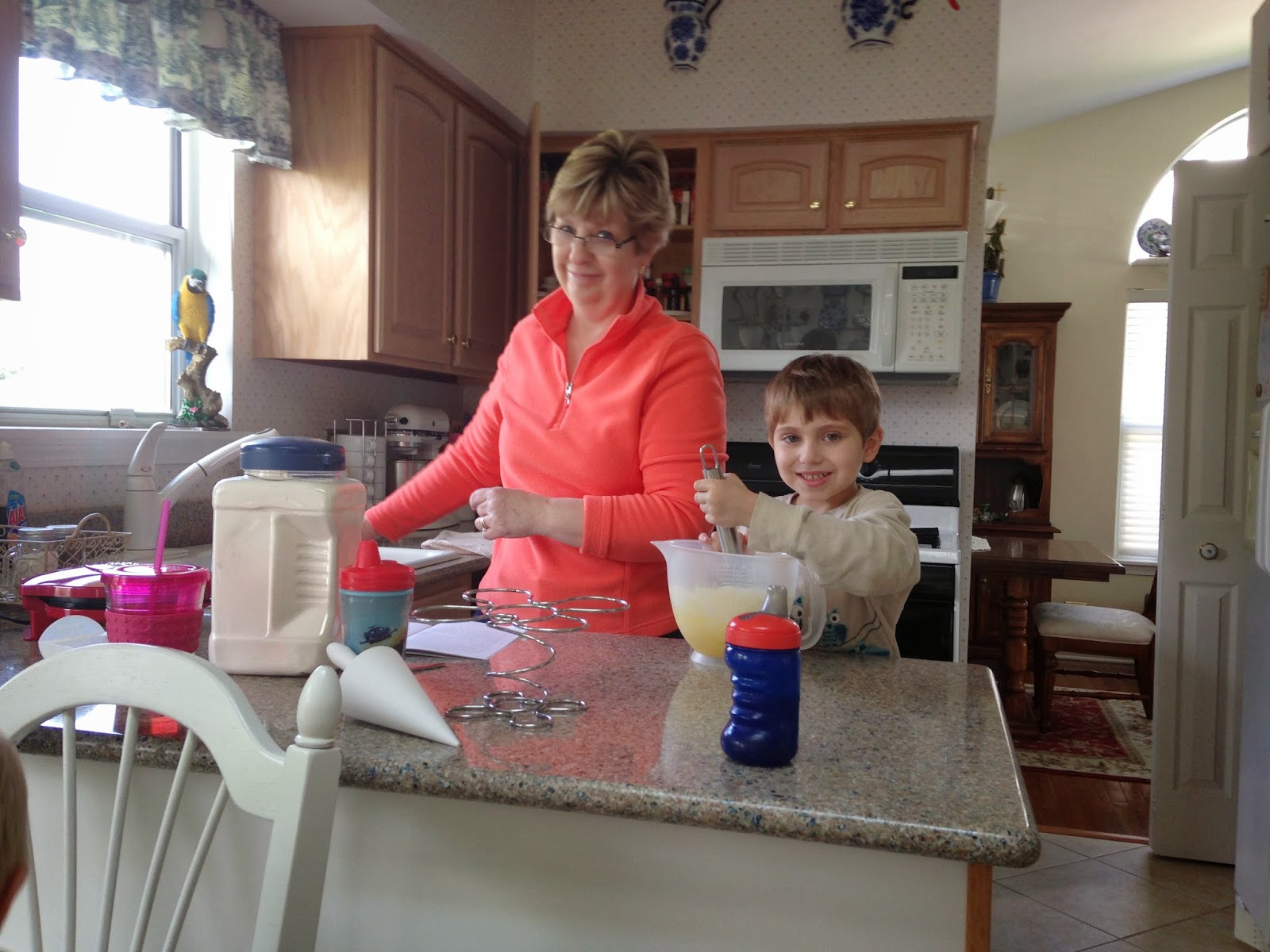 Henry got to help, too, and the ice cream cones were really yummy. I guess treats you make yourself really do taste better, although I didn't help, I just watched and tasted.  ;) 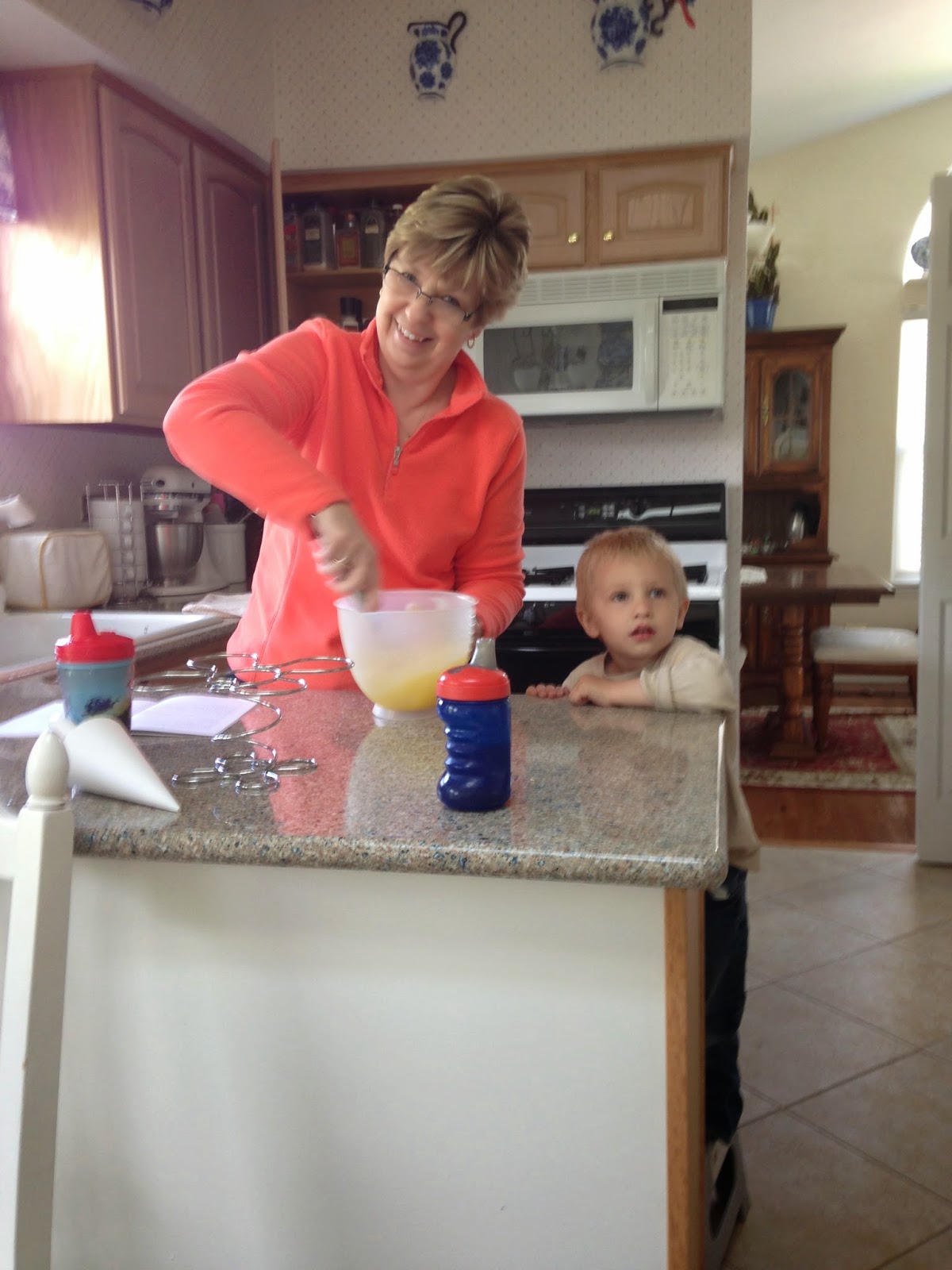 Can you tell Rusty was hoping one of them would drop his ice cream cone? 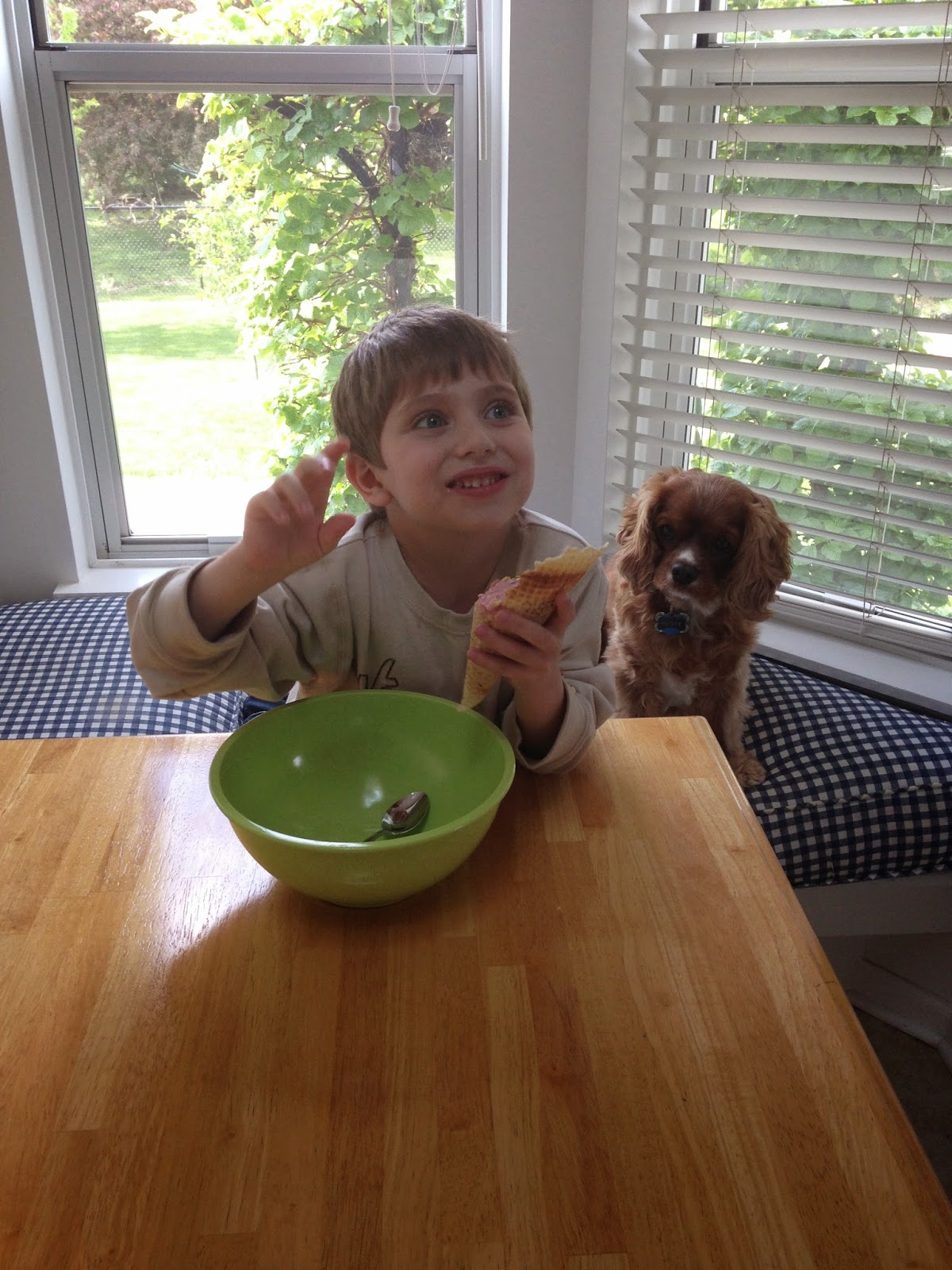 I think Henry dropped a bit, and Rusty was RIGHT on that situation. 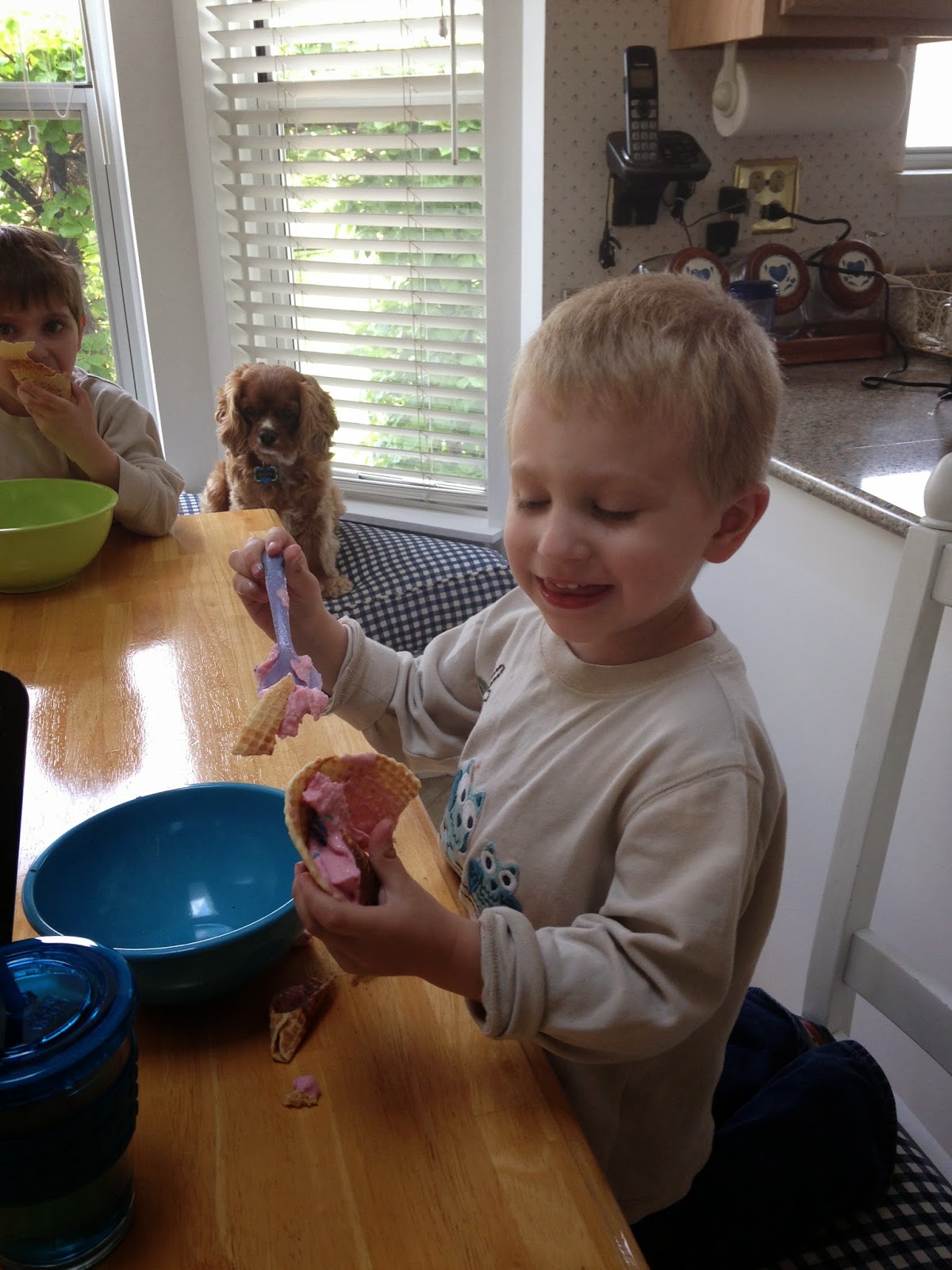 I know that the boys had a great time. Shall I tell you how I know this? On Sunday and in fact all week, they've been pretending to make ice cream "just like Grandma Linda's!" They bring it to me to "taste" so I've tried lots of fake ice cream this week. Nick even rigged his cash register up so they could "sell" their ice cream creations, and Henry tried to steal the sprinkles from our pantry to add to his ice cream. When Nick and Henry have fun doing something, they role play it again and again.
Posted by Melissa E. at 10:00 PM