No, he hasn't started listening to heavy metal. Henry has picked up a rather odd habit. Even in this blurry cellphone picture, you can see the blue bruise right in the center of his forehead. It is a self-inflicted injury, even though my instinct was to blame Nick. Greg said he did it to himself when Nick wasn't even around. 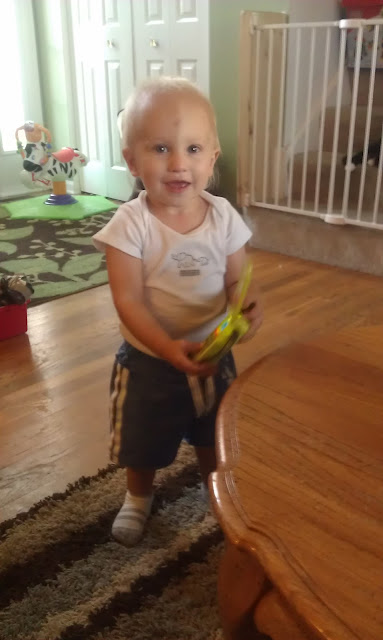 When Henry is really, really mad, he bangs his head against the hardwood floor repeatedly. We had him at the doctor last weekend (for a fever) and we mentioned that the teething is making him so mad that he sometimes bangs his head. The on-call doctor said he was doing it for attention and to ignore it. I think he's frustrated because he doesn't talk yet, and this is how he expresses himself. It does usually result in us picking him up, so I suppose maybe that's why he does it. I wish he would stop, though.
Posted by Melissa E. at 6:43 PM