This year I've been packing lunches for both Nick and Henry, and it's been a challenge. Neither boy really likes sandwiches with meat in them, and I cannot stand getting their lunch bags back at the end of the day with only one bite eaten. Throwing out food infuriates me, for some reason. So I've been experimenting. Nick is easier to please--he loves cold spaghetti o's, and he'll eat fruit, cheese and crackers, and the fake PBJs made with soy butter. Henry has been more of a challenge. He rejects nearly everything I try, and though he loves PBJs, he won't touch Wow Butter. Tomorrow I'm actually trying cold macaroni and cheese with bacon. (I know, it sounds gross, but he said that's what he wants.) 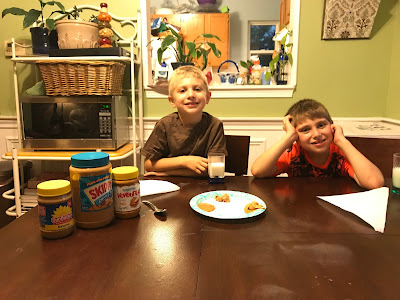 Henry and Nick love to watch YouTube, and they keep asking me to do a "challenge" like their favorite kids. So we did one with all three kinds of sandwich butters. Neither of my kids has any kind of allergies (that we know about, anyway), but my kids are messy with peanut butter and I don't want to be responsible for another child's allergic reaction. I have friends who have kids with peanut allergies, and it's really scary. Anyhow, my goal was to see if Henry, especially, would like one of the non-peanut butters. Here is the video.


Yay! Henry said his favorite was the Sun Butter. He still doesn't like the WowButter, but that's okay. I can't have soy, either. I was surprised that Nick correctly guessed all three butters. He's the least picky kid I know and will eat all of them, but I suppose he has a refined palate and can easily tell the difference.