Today was Nick's summer concert, and he got to perform at an outdoor amphitheater here in Plainfield. He plays the drums, and today he got to play on the "big kit," the "mini-kit," and the "base." I'm calling the different drums what he calls the drums, because my knowledge of musical instruments is seriously limited.


The weather was warm and sunny, and I ended up with some definite sunburn. Like all the other parents, we sat and took photos and videos of our kids. We were kind of like kid band groupies. 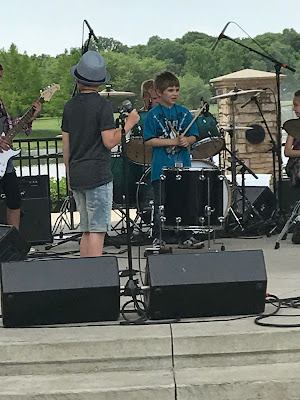 I'm always impressed when I hear the kids performing these songs, all by themselves. This first song was Nick's favorite. It's "When I Come Around," by Green Day.

These kids have been practicing their songs for months. Nick has been taking drum lessons at School of Rock in Plainfield. Their band met every Thursday for an hour and a half, and Nick took drum lessons privately once a week for 45 minutes. For this concert, they decided to call themselves: RIP, Rock In Peace. This is Nick's special "Artist Pass" that he had to wear because he was a performer. 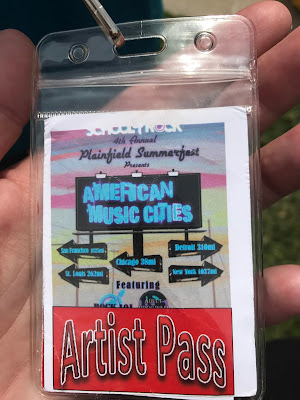 Greg had to take video of this one from the side of the stage, since Nick was on the big kit. He's fairly short, so the kid standing in front of him blocked the view. You can see him really well from this angle, though. They're singing "Sweet Home Chicago."

Here's the six to twelve-year-old  cover version of "Louie, Louie."

And last, but not least. . . Here they are performing "Blue Suede Shoes."


After Nick's performance, we got some BBQ from a nearby food truck and watched the other bands. Nothing like BBQ and sunshine after a rock concert. 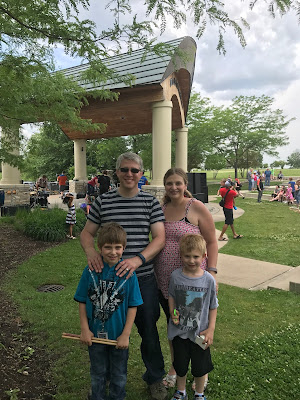