I must be insane!, I thought to myself as I wandered the aisles, my cart full of roasting sticks, emergency compass/whistles, flashlights and sleeping bags guaranteed to keep you warm even if the temperature hits 40 degrees. I'm pregnant, I'm asthmatic, and I hate the cold, and yet I'm packing for a camping trip when there's a frost warning.

Saturday was Nick and Henry's first Cub Scout camping trip, and we were going to spend the night tent-camping at the Jellystone Campground in Millbrook, IL. I've taken the boys camping before, but that was in a cabin with heat, air-conditioning, and a refrigerator. This was a whole different ball game, and I kept questioning the wisdom of the trip. I am nothing if not stubborn, however, so I pushed on with my extremely full cart. I opted for an air-mattress, figuring I wouldn't be able to get off the ground in the morning if I slept without one. 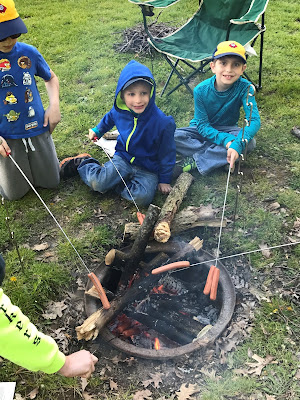 I have been camping many times before. In fact, I was an Explorer Boy Scout in a co-ed troop when I was in high school. (Explorer Scouts investigate careers, and our group was all teens interested in becoming teachers.) From what I can remember of those days, though, any camp outs we had consisted mostly of the guys showing off their manly skills while I clapped appreciatively, gingerly perched on a log.


I haven't slept in a tent, though, since college. That wasn't true camping, either. Instead, it was more a case of wanting to take a trip but being too broke to afford hotel rooms along the way. I have vague memories of setting up a tent in the dark and collapsing inside of it, exhausted. My nineteen-year-old self had handled sleeping on the ground without too many repercussions. How would my thirty-eight-year-old body deal with getting back to nature? That remained to be seen.

I love having my boys in scouting. It's outdoors, it's active, and running around poking each other with sticks is what Nick and Henry do best. Really. It's a true talent with these two.


Speaking of sticks, Henry did an especially good job of gathering them. Long after the other kids had given up and gone to play, Henry was still bringing us piles of kindling. 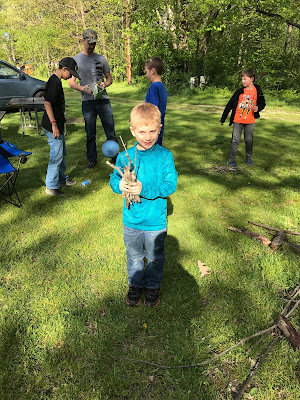 One thing that I love about camping is the food. We had hamburgers and hot dogs, and they were delicious. I should add, however, that Henry and Nick both refused to eat the hot dogs they cooked over the fire. There were "brown spots" on them, you see. Sigh. 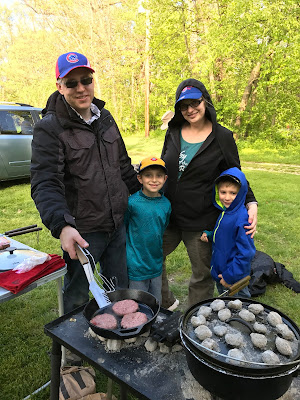 We borrowed a tent, and the boys were super-excited to get to sleep in it. They kept wanting to go in and out of everyone's tents. 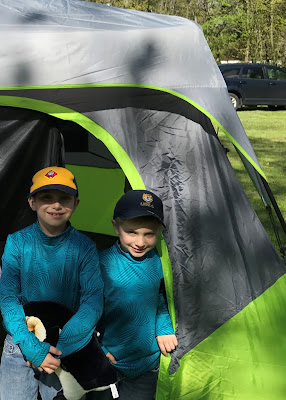 Henry, however, was devastated when we told him there wasn't room on the air-mattress for him. Little did we know that Henry would indeed spend more than half the night sleeping in my sleeping bag on top of the air mattress. . . 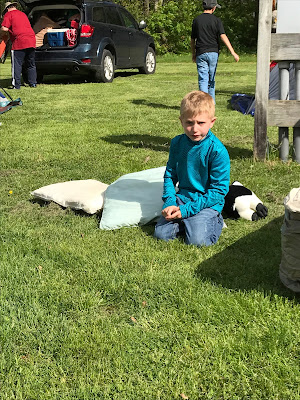 While the campfire was cool, Henry and Nick really liked the night hike. Here they are with their buddies. I was very glad they were not hike buddies with one another--they fight too much. 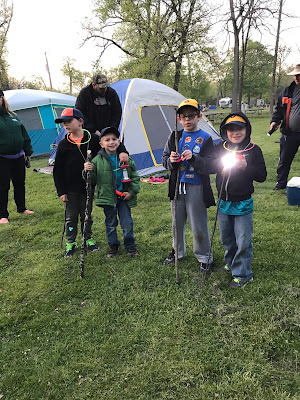 Our troubles didn't start until bedtime. The boys were up past their normal 8 p.m. bedtime, and we didn't even get into the tent until around ten. It was definitely cold, but in the sleeping bags I'd bought definitely helped, so we were not too chilly. My anxiety kicked in around 2 a.m., when I woke up gasping for breath since I'd had the blanket over my head. I started worrying about what would happen if the boys had blankets over their heads, and then I grabbed a flashlight to check them out. I pulled the blanket off of Nick's head, and checked out Henry. Not only did he not have the blanket over his head, he was only half in his sleeping bag, and somehow he had taken off his shirt. (!?!) How was he sleeping so deeply in this freezing weather? At this point it was in the low 30s, temperature-wise. I could see my breath with every exhale, and a light coating of frost covered the part of my pillow where my head did not rest.

I pulled both boys onto the air mattress with us, made Henry put on a shirt and climb into my sleeping bag with me, and tried to go back to sleep. The rest of the night consisted of Greg and I shivering and trying to get comfortable with four of us on a supposedly queen-sized mattress that was more like a full. Greg actually spent about an hour in the car warming up. The kids fell back to sleep within an hour, but I didn't fall asleep again until after 4 a.m. 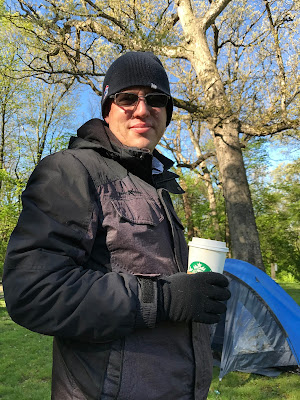 Greg went on a Starbucks-finding mission as soon as he woke up. To be honest, he'd mapped out where the nearest Starbucks soon after arriving at the campsite on Saturday. I was just grateful for the caffeine he brought. When I got out of the tent, there was actual frost on my shoes. 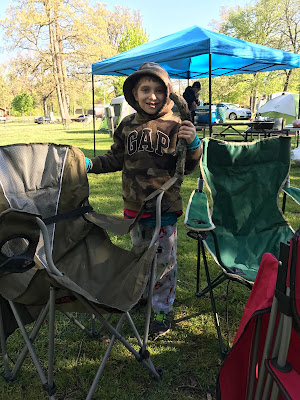 This morning it was Nick helping to find firewood. Henry? He found me something very special. A rock shaped like a heart. "For you, Mommy," he said. My heart melted. 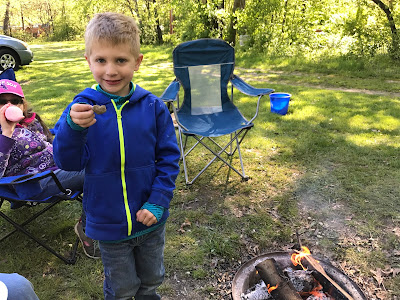 Well, we survived. To be honest, the kids had such an awesome time that I won't be able to deny them future camping trips. Overall, the trip was definitely worth it. I will, however, get a heated cabin if the temperatures are predicted to be below about 55 degrees. I don't want to miss out on the memories, but I do not want to risk frostbite again.