Happy Halloween from everyone's favorite wizards. Who says Harry Potter should always have top billing? This time, Ron Weasley and his cool orange hair get to be first.

Henry was quite scared by many of the Halloween decorations. In fact, he refused to go ring the doorbell at more than ten houses. There were another four or five where I had to hold his hand and walk him up to the door. Something tells me Henry will be like me and not like horror movies when he gets older.

Harry Potter (a.k.a. Nick) was so busy running from house to house that you mostly see him and his friends in a blur in all the pictures. Not as noble as seeking horcruxes, but hey, Nick had a mission. 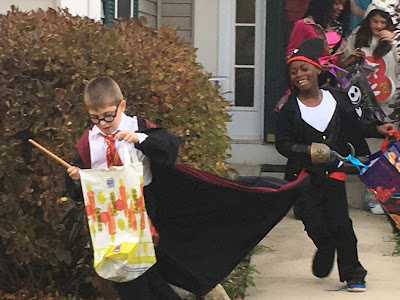 I think this is the only picture Greg got him to pose for--I guess Nick only stops for death. 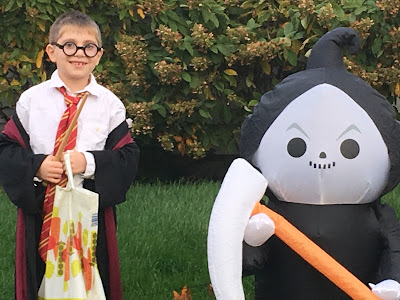 Henry wanted to tell me all about his Kindergarten Halloween Party. Here's what he had to say:


Henry also made this cool paper plate pumpkin. Let him tell you all about it!


Nick had a class party, too, and from his descriptions, it was hopping. I'm not going to post the video where he describes, in excruciating detail, the Doritos, candy, and juice that they had. This one is about the games!

That last video ended when a trick-or-treater came to the door. Nick and Henry made out pretty well, and they filled their bags about halfway--not bad for their age and small legs. And me? Well, I ended up walking 13,766 steps today. Probably enough to make up for all the snack-sized candy I pilfered from their bags.