Henry is in Kindergarten!

Yesterday was Henry's first day in Kindergarten. He has the same teacher Nick had two years ago, and he was so eager to go that he kept asking over and over again when it would be time to leave for school. (He is in afternoon Kindergarten.) Here he is on the first day of school. 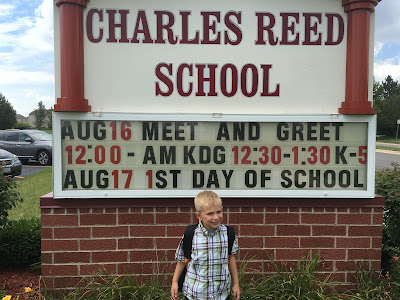 I'm not very good at saving papers, so instead I like to snap pictures of their school work so I'll always have it--since it's date/time stamped I have a prompt to help me remember when the picture is from, too. Here's one from his first day of school. 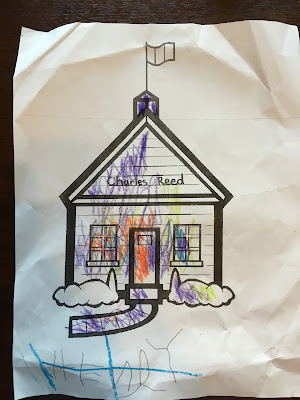 Today Henry posed with his picture.

So you may be wondering about the random red chunks on the back of our front door. I wondered the same thing and asked Henry. "What is that red stuff." He replied, "Um. . . you know the good cheese? Well, it has red stuff on the outside that's really squishy then pictures stick." Yes, that's right. My son took the wax from a Babybel cheese and smeared it all over our front door. I must really not be a details person since I only noticed it in a photograph.

When I initially asked Henry this evening what his favorite part of Kindergarten was so far, he said, "Um. When I go home." I, of course, asked him to elaborate. "Because when I sit on the carpet it boring. No toys to play with." Poor Henry goes to a half-day Kindergarten, which means that there's no time for play. I didn't give up there, though. I asked him again about five minutes later, and here is his response:

Would you like to see the schoolbus he is talking about? Well, here it is: 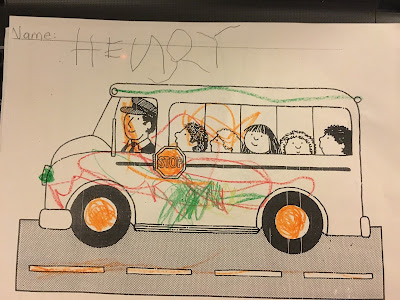 Henry also did a math worksheet today. I was rather proud that he did it correctly, but of course I don't know if he had assistance at any point. I know he sure corrects me if I promise him six candies and only give him five, though, so the kid has some number sense. 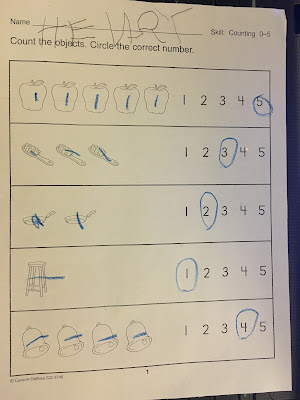 My boy is getting so big. I'm not one to get all teary-eyed, but I do get just a little sniffle when Henry's baby pictures pop up and I think of that little baby in grade school.