Henry's speaking has been improving a lot lately. He can even be understood by most people. Yesterday morning, he had to get a blood draw, and he proudly told the nurse, "I don't mind when you stick me. Go ahead." He didn't even cry. Later, we made a trip to Meatheads for a post-gardening lunch. Henry brought out this coin to show the cashier. I had to tell him that pirate coins don't count as legal tender, though I appreciated the gesture. 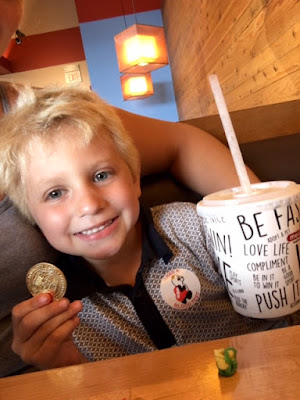 Since he was eager to go to the counter, I sent him to go get us boxes for our leftover burgers. Henry is so short he had to raise his hand in order to be seen over the register! 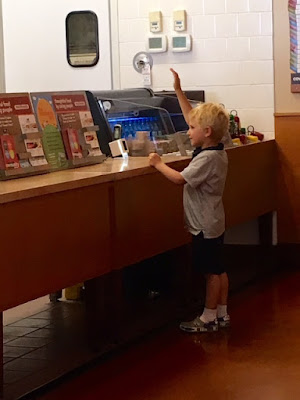 He was able to explain that we needed three boxes. A shout out and a special thank you to the really patient and good natured people who work at Meatheads--they made Henry feel "almost like a big guy." A little over a year ago Henry was mostly unintelligible to strangers. Now he's eager to communicate and ask for what he wants. After being born with a cleft palate and then developing a seizure disorder, Henry is doing very well for himself. 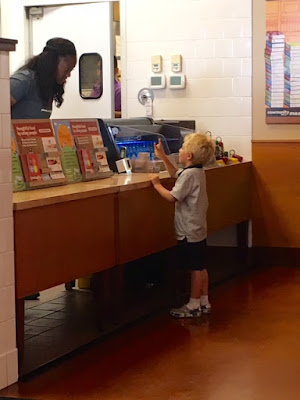 The nice lady at the counter listened carefully and had her co-worker go get him the boxes. Later, he also asked for a bag and a lid for my cup of cheese. . . because what good are spicy fries without cheese for dipping? 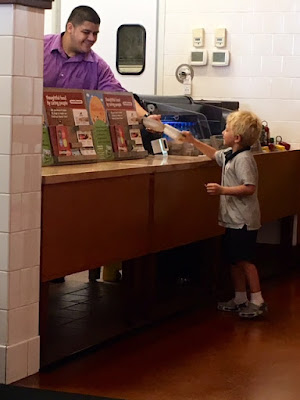 Henry was so proud of himself! "I a big boy!" he said when he sat down. (He's still not using the word "am," but he'll get there.) 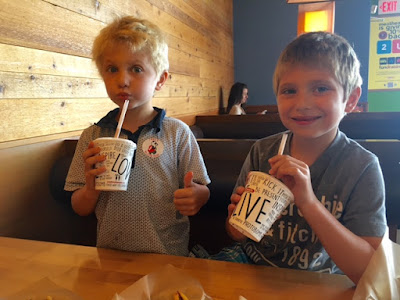 Besides strides in speaking, Henry has become quite the little techie. In the last few months, Henry has downloaded nearly 100 iPad apps, including a Flux Capacitor app.

He figured out how to search for webpages (again, using Siri), and then share them on his daddy's Facebook. He put nearly three grand worth of Octonauts toys into an Amazon.com cart (thank goodness he doesn't know the password). It was at that point when I set up every parental control I could find.

Henry has also taken many screenshots, played lots of garage band, and taken apart our dvd player. Last week he accidentally asked Siri for a synopsis of "The Crying Game," and created this little gem using the selfie camera on our iPad.

I'm a little afraid this guy is going to be a hacker. He even figured out how to put apps into folders, and to hide them several pages back. Henry used the voice feature on Siri to name the iPad folders. He set up one that actually read, "When Mommy says no." (Yes, really. Ask his daddy if you don't believe me.) A few weeks ago, I set up an app that lets me shut down screen time after a set period of time. Less than an hour later, Henry was somewhere deep in the settings menu, methodically going through each menu item trying to figure out how to override the screentime limits. My little guy has done all of this despite not being able to read and only recognizing a few numerals. Henry has quite a bright future in front of him, I think, so long as he uses technology for good rather than evil.