A Random Friday Night in January

My Friday nights are always spent with my boys. Greg pulls up in the van after school, and then he takes off in my car and I climb in to the van, ready for a night on the town. Or as much "on the town" as one can be with a four-year-old and a seven-year-old.


Tonight I decided haircuts were in order. Henry and Nick were both getting pretty shaggy. Nick said he wanted to have a long, dark haircut like Harry Potter. I told him that if he grew his hair any longer, it'd have to be brushed every day. As to the color, I told him he wasn't changing that until he was at least fifteen!


We tried a new haircutting place in Naperville, Snips-Snips. I may be cheap enough to purchase my children's jeans and toys at Goodwill, but I also take my kids to a specialty place for pricey $16 haircuts. I'm a contradiction of a mommy, I guess.


Nick's hair turned out okay, though I think it's still a little shaggy. I'm afraid his dreams of Harry Potter hair (at least, how it looked around the 6th movie) are not to be fulfilled. I originally asked for Nick's hair to be left a little longer (per his request), but he moved while she was cutting and then it had to be evened out.


Nick's neck, by the way, is all red because he simply cannot sit still while the stylist uses the clippers. That's part of the reason I take him to the kids' salons. They have a little more patience and skills with wiggly ones. Every time Nick gets a haircut, he pulls the gown from around his neck, gets hair down his neck and back, and then scratches it until the skin is all red.

Henry is less wiggly in the chair. I really like how Henry's hair turned out, and he was quite pleased himself. "Mommy, I have mermaid hair!," Henry exclaimed. I'm not exactly sure where he got that idea from, but it was cute anyway. "Um, my hair is yellow, light yellow, just like a mermaid. That's why I swim so good." Henry does indeed swim very well for a four-year-old, and he's now in an intermediate preschool swim class. Not sure if his "mermaid hair" has anything to do with it, though. 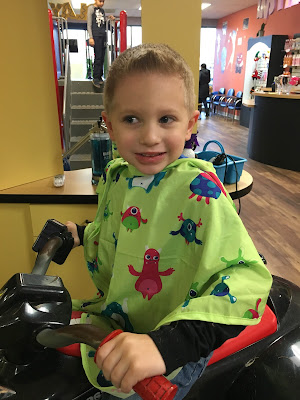 After our foray into the world of children's haircutting salons, I took the boys to the bank, where they were thrilled to get suckers through the pneumatic tube system. I seldom go to an actual bank anymore, but Henry and Nick insisted that suckers are the main thing that travels through those tubes. They were right, I guess. They must've learned that from trips with their daddy.

After the expensive haircuts and the trip to the bank, I took the boys to the Goodwill by our house. I always see it as something of a treasure hunt. You never know what you're going to find, but there is usually some treasure to be found. I was looking for children's shoes, a purse, and a new bread machine. (My $120 bread machine has something wrong with the pan. Probably from using it every other day for two years.) 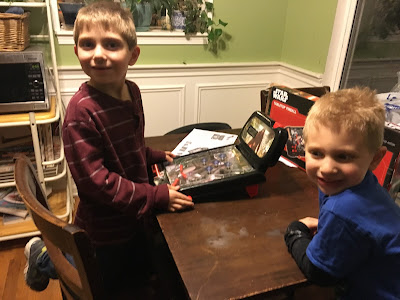 My kids think Goodwill is like a magical toystore. Usually this is because I let them pick out a toy for their troubles. (Their troubles being having to walk around the store with me treasure-hunting.) Tonight Nick found a Star Wars pinball machine, still in its box. It looked like it hadn't been used and even came with batteries.


Henry got a brand new Sno Cone machine (everything was still sealed) and a pair of brown shoes in like-new condition. They may have actually been new--Target donates unsold merchandise to Goodwill. My little scientist has been trying to make "ice cream" by dumping random things (crayons, berries, socks) into bowls of water and freezing them. I'm hoping Henry likes this better and starts to realize how frozen treats are actually made!

Oh, and me? I found four new, sealed packets of Lego Friends kits ($1 each), a brand new sealed Silly Putty egg (both for my classroom prize box), a brand new Nine West purse (with original tags), and a Breadman Breadmaker that looks like it was used maybe once. 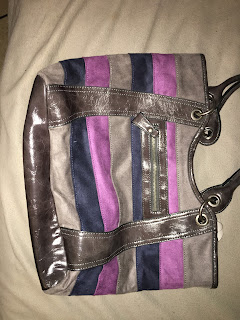 The funny thing about bread machines is that every secondhand store has piles of them, most hardly or never used. I think this is one of those appliances that people give away because they never mastered using it. My kids go crazy for my homemade bread, so I'm on my third machine already.

Total cost? $40 on haircuts and $31 at Goodwill. Oh, and two very cheerful children.