Fun With Plaster, or A Mother's Day Project

Since having kids, I've tried to do something creative for a Mother's Day present. Last year Nick and I made plant stakes, and the year before that we painted pots. This year, I wanted to get Henry involved, too. I decided that we'd make garden stepping stones for my mom and Greg's mom. 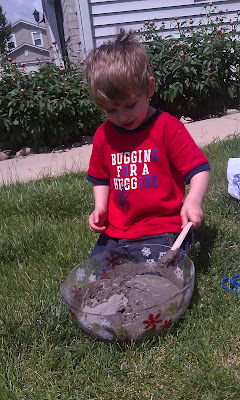 Yes, this involves mixing plaster, and no, I am not entirely sane. I did let my three-year-old help mix the plaster. Nick loved it. 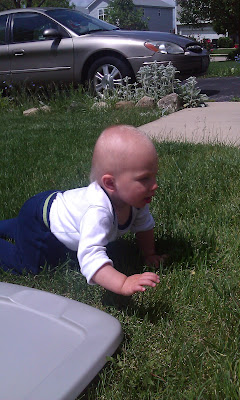 I was going to document the whole process, but then Henry started crawling towards the wet plaster, so I put away my phone camera and proceeded to baby-chase. This is how they turned out. My original intention had been do do their hands, and that worked fine for Nick. Henry, however, refused to cooperate, and instead of holding his hand straight, grabbed the plaster every time I tried to press his hand down. So I used his little foot instead. 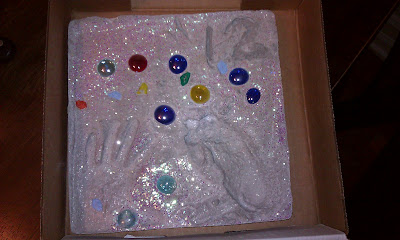 Nick did all the decoration, though I carved the '12 in the corner to commemorate the year. Nick also poured an entire box of glitter on each stone. I love this picture of my mom and Henry. She just looks so proud of Nick and Henry's "hard work," while Henry looks a little confused in a typical Henry way. 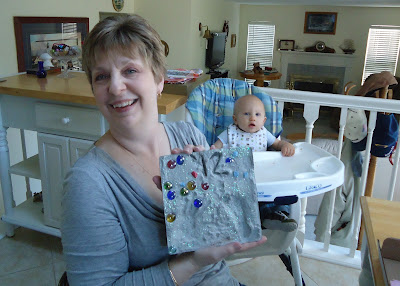 In other news, my mother's day was pretty good. I started off with a mani-pedi, then had to tutor for several hours before dinner at my mom's. Greg got me a gift certificate for a massage at the Herrington Inn and Spa in Geneva. His anniversary gift will be a night at the Inn for our 4th wedding anniversary in a few weeks.
Posted by Melissa E. at 9:10 PM